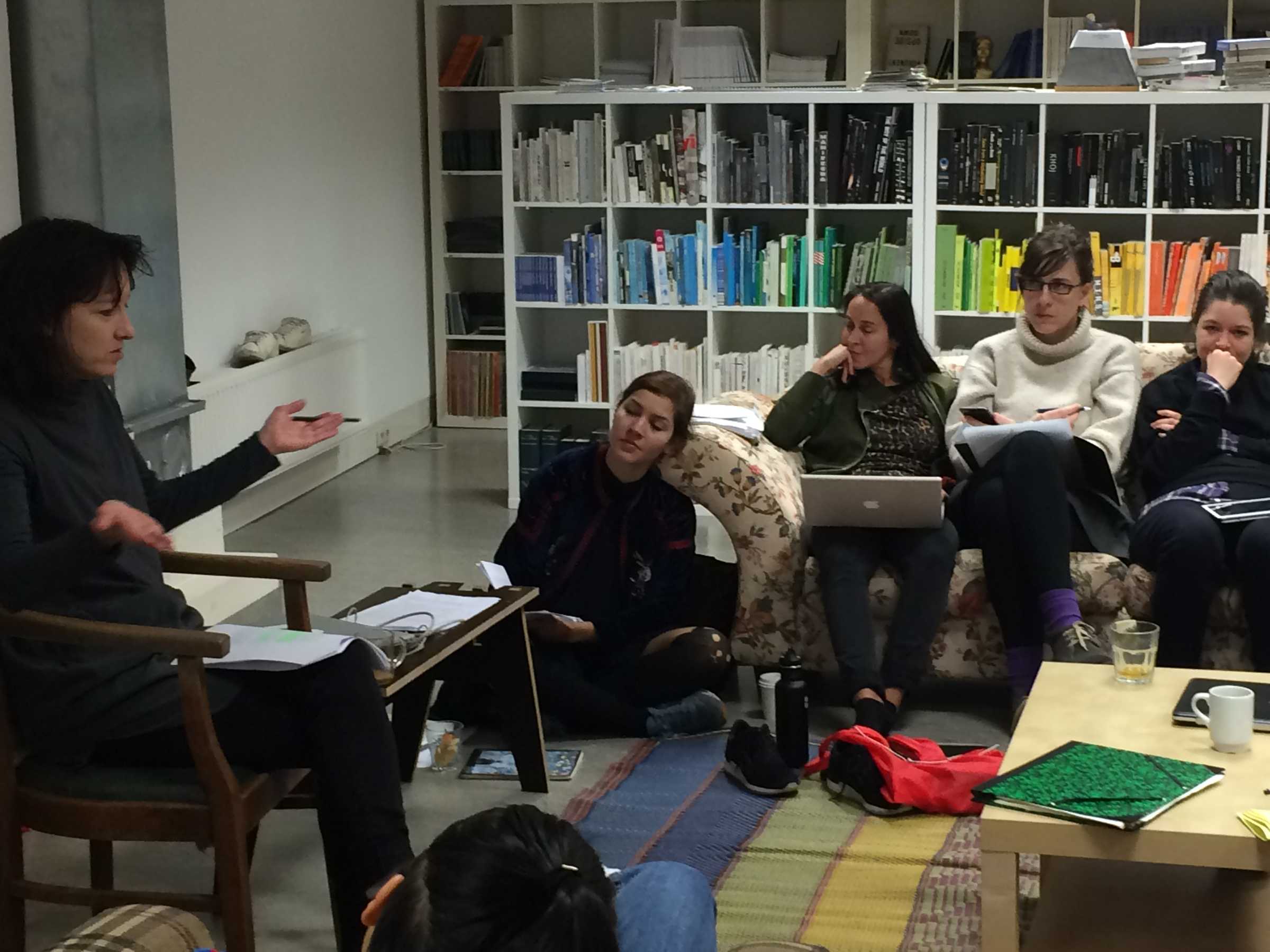 Prior to the recent legitimacy crises of neoliberalism, Contemporary Art took rather less interest in language-based practices, especially those trafficking in an oral image. Derridean deconstruction excommunicated a certain kind of embodied ‘expressionism’ from the white cube, possibly as a result of preference being given to one translation of Derrida over another—the neutrality of ‘There is nothing outside the text’ (downgrading subjectivity differentials) over another oscillation in his translation that seems rather more generously secular and planetary, ‘There is no outside-text’. The oscillating difference is identified by Gayatri Spivak, among others, whose articulation of culture’s non-globalisability in planetarity is taken as a persistent framing proposition of this class.[1]

The concept of the ‘writerly’ referenced in the course title continuing from last year is taken loosely from Barthes’ articulation in S/Z, written in the early 1970s:

‘The writerly text is a perpetual present, upon which no consequent language (which would inevitably make it past) can be superimposed; the writerly text is ourselves writing, before the infinite play of the world (the world as function) is traversed, intersected, stopped, plasticized by some singular system (Ideology, Genus, Criticism) which reduces the plurality of entrances, the opening of networks, the infinity of languages.’ [2]

Noting a certain proliferation of unbound, presentist and debordered ‘writerly’ formats in the contemporary moment, the Seminar At the Limits of the Writerly continues to assess in its second year the edge work of a critical writerly practice.

Last year we began with an understanding of ‘theory’ as itself a kind of productive-problematic ‘mobile apparatus’ vis a vis Edward Said’s ‘The World the Text and the Critic’. Said aided us to think about how theory reads and writes differently by ‘traveling’ beyond its own socio-historic moment of composition. Reading Said with Aaron Hillyer’s 'The Writing of the No’ from The Disappearance of Literature sets up a diffractive arrangement of ‘affirmation and negation’ that provided a basic motor for thinking through a certain double-image of ‘the limits of the writerly’ in class. We dramatized in particular the relationship of critical poetries to the speculative textual operations of company personhood and corporate speech acts of full capitalization and value-formation. We began cultivating writing and reading practices against EuroAmerican avant-garde assumptions of spatial enveloping and temporality that mimic the company form of ‘global application’.

Hillyer’s book laid a possible future for literary writing against or beyond its disappearance in late capitalism, in the persistence of labours of aesthetic negation. He outlined for us various modalities of work at the limits of the writerly, in his words:

in the affirmative modality of study,

in the question of community,

in the improper nature of our dealings with apparatus,

in the relationship between mysticism and un/governable subjectivity,

and of literature/writing to itself.

This year we take leave slightly from avant-garde poetry (i.e. exemplarity in the relation of ‘literature/writing to itself’) to think the writerly through these flagged ‘improper dealings’ with apparatuses and between mysticism (ontological multiplicity?) and un/governable subjectivity, while also main-framing the concept of infrastructure.

Our theorists of the dispositif and of infrastructure will be Marx, Foucault, Althusser, Serres, Povinelli and others. We will continue to think through the coloniality of form and non-alignment from such, in modes of artistic production relating to specific infrastructures—from mega to microscaled, from socially (re)productive to massively life-eliminating – through which we can clearly read contemporary operations of raciality, security, extraction, and financialization for example. Folding this attention to infrastructure beyond art space and back into a certain politics of aesthetics (e.g. acknowledging ‘institutional critique’ as something that bankrupted states now inflict ordinarily on the demos and ecosocial body) we will consider how training or differencing imagination in art and writing relates to Hillyer’s notion of non-governable subjectivity. Particular attention will be paid to the experience of the (former) South and roles of settler colonies in innovations and conflicts of the infrastructural, as well as the spread of settler colonial governance regimes into sites and territories not formerly/formally considered to be falling under this category.

HOW TO DO THINGS WITH THEORY: At the Limits of the Writerly: Which Dispositif? from Month to Month