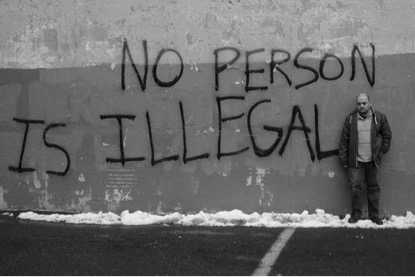 The reach of the juridical keeps expanding, as do the ambitions of artistic or aesthetic practice. In this seminar, we will examine multiple interferences between law and art, between the juridical and the aesthetic—ranging from issues of copyright to citizenship and illegality to animal right and plant rights.

In the post-Kantian, Romantic conception of art, the artistic was regarded as sphere of exception, in which alienation could be temporarily, symbolically overcome in aesthetic experience. A subjectivized object marked by an intricate dialectic of logos and pathos (to use Rancière’s terms) the work of art appeared to bridge the gulf between the sensible and the sensuous, without ever effecting a synthesis. Art, as the placeholder of the aesthetic, was the sphere of quality, of ineffable sensation, where the subject could be truly subject: according to this idealist-romantic notion of art, in the artwork the subject confronted not a cold and objective world but matter that responded to mind, having been made pliable and welcoming. The artwork becomes a site of reconciliation, an embodiment of the mind that momentarily appears to take away the alienation of wage labour. However, Adorno noted that the “absolute artwork” meets the “absolute commodity”: the exception to the rule of wage labour and commodification becomes the quintessential commodity.[i]

As Terry Eagleton put it: “Once artefacts become commodities in the market place, they exist for nothing and nobody in particular, and can consequentially be rationalized, ideologically speaking, as existing entirely and gloriously for themselves.”[ii] This, of course, is the commodity fetishism that Marx sought to unmask as an illusion. In doing so, he used concepts from the the idealist philosophy of religion (the fetish) as well as aesthetics. When Marx characterizes the commodity as a sinnlich-übersinnliches Ding (a sensuous-suprasensory thing), he is politicizing aesthetic categories.[iii] Like the artwork, the commodity is not quite what it seems. It is present to the senses, yet it is also more (or less) than completely sensory. Its logic is not transparent. Marx could be said to effect a critical synthesis of various aspects of Hegel’s work, his Philosophy of Art and Philosophy of Religion, as well as his Philosophy of Right. In the latter, Hegel effectively defines the sensory-suprasensory nature of social life in legal terms. In the modern Rechtsstaat, both people and objects are shaped by laws that are, as it were, the invisible armature of social life.

A crucial concept for Hegel is that of the legal person. “No person is illegal” (see image) would be a pleonasm for Hegel, as for him the person is the legal person. Hegel notes that a subject is “merely the possibility of personhood” (Subjekt ist nur die Möglichkeit der Persönlichkeit), since every living thing (jedes Lebendige) is a subject. A person is a determined subject in the sphere of objective spirit or Fürsichsein.[iv] The person is an abstraction, and an agent of abstraction; it ultimately boils down to the right to (own) things, and to turn those things into property. The world becomes reduced to a constellation of rights-holders and held rights, of persons and properties. No wonder that Marx was an attentive reader of the Philosophy of Right. In keeping with later Marxian theoretical lingo, we can say that in the Philosophy of Right, we see real abstraction in action.[v]

The real abstractions of money, of the market, are dependent on the real abstractions of the law, and thus of the state. “State create markets. Markets require states. Neither could continue without the other, at least, in anything like the forms we would recognize today.”[vi] In cognitive capitalism, these markets have become markets of data, information and knowledge to an unprecedented degree. As members of the Indian lokavidya initiative Vidya Ashram have put it: “Now the global order is reinventing itself. In the information age, there is not going to be a privileged set of knowledge producers who will be allowed an autonomous space, a safe haven to explore and invent. Knowledge will be harnessed from the whole cultural field and subjected to regimes of cognitive measurement, knowledge management, and information enclosures.”[vii] In art, as in academia, this has led to a progressive “legalization”—in the sense of its incorporation to the sphere of the juridical.

Michel Serres has noted that the French university was traditionally split between humanities, science, and medicine and law. Serres argues that a “third subject besides that of science and humanities is born in those medical and law faculties.”[viii] In this sphere of thirdness, a new procedural, algorithmic reality conquers both the sphere of abstraction and of the concrete. Law provides the protocols that regulate the operations of technoscience and finance—and art, as increasingly integrated in both finance and technoscience. This accelerating integration of various forms of real abstraction I call concrete abstraction, and it is crucially dependent on legal frameworks.[ix] The law doesn't just regulate things that preexist; it produces new realities. “Intellectual property” is what many a contemporary legal person aspires to accumulate—and those persons need not be natural persons. Corporate personhood becomes abstracted from embodied subjectivity, but fictitious artist-activist corporations can try to turn this personhood against itself.

Turning against the romantic “ideology of the aesthetic” and its ideal of Versöhnung, the avant-garde developed practices of transgression. In attacking the Law that predates the law in its modern sense—religious commands and social taboos—the avant-garde (from the anarchist bohemia of the late 19th century and Dada and Surrealism to Viennese Actionism and the Situationists) performatively laid bare the violence of the law itself. Not so long ago, the Invisible Committee tersely noted that “three decades of non-stop pornographic innovation have exhausted all the allure of transgression and liberation.”[x] But in an increasingly legalized global order, with national laws and a growing apparatus of international agreements and courts, it may be that old forms of transgression are looking like old hat because, in Agamben’s words, “in the state of exception, it is impossible to distinguish transgression of the law from execution of the law.”[xi] From the War on Terror, Guantanamo and NSA abuses to the proliferation of illegals” everything conspires to drive home this point. No need for artistic interventions that reveal a violence that’s there for all to see (yet turn a blind eye to).

In our regime of concrete abstraction, the law (in)forms reality’s new mutations. If artists opt for immanent work with rather than a full-frontal attack on the law, this may not be a capitulation but a tactical adaptation to these circumstances. In this course, we will look into various aspects of ”legalized” aesthetic theory and practice, from an engagement with legal theatre and the extension of personhood and (non)human rights to the development of a forensic aesthetics.

[i] On this passage in Adorno’s Aesthetic Theory, see Stewart Martin, “The Absolute Artwork Meets the Absolute Commodity,” in Radical Philosophy no. 146 (November-December 2007), p. 18.

[v] The term was introduced by Alfred Sohn-Rethel, but approximations can be found in Marx’s writings.

HOW TO DO THINGS WITH THEORY: Legalize Everything from Month to Month