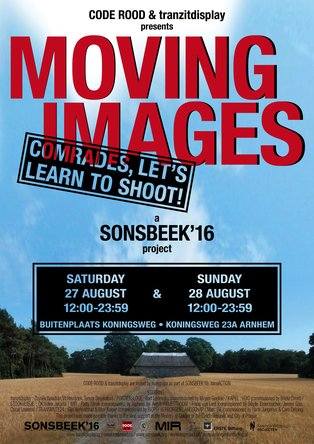 Buitenplaats Koningsweg, in the north of Arnhem, is a former military base that originally was built by the Germans during World War II as part of Fliegerhorst Deelen. It is also the home base of the collective CODE ROOD. They often organize art events at this location.

For SONSBEEK ’16, ruangrupa connected CODE ROOD to Tranzitdisplay, a collective from Prague. Together they invited Dutch artists to create movie scenes in and around the buildings that were used during World War Two and the Cold War. On saturday 27 August and Sunday 28 August CODE ROOD and Tranzitdisplay invite the audience for a cinematographic walk through the area. Art installations that are part of the film set, will be shown in and around several buildings.

On Saturday night the video installation of Dutch artist Patty Struik will be exhibited in the M.I.R, a white dome-shaped mobile exhibition space. The videos will be projected on the inside as well as on the outside of the M.I.R. Archive material from the OK Video Festival from Jakarta will be shown in the nearby boilerhouse and a performance from Frans van Lent will take place during sunset.