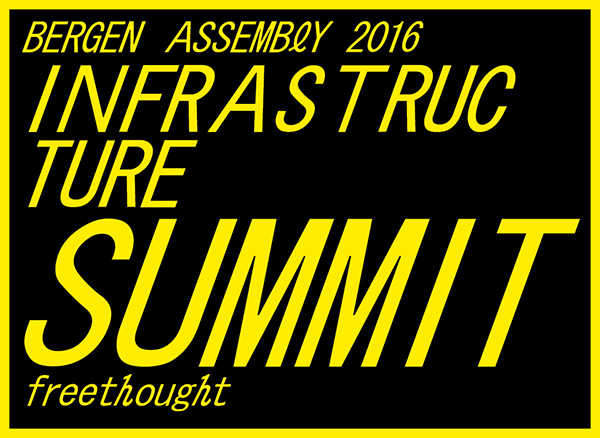 freethought's programme for the 2016 Bergen Assembly launches with The Infrastructure Summit, a two-day discursive and performative event with internationally renowned writers, curators and artists investigating the nature of infrastructure in times of economic disparity, ecological catastrophe, expulsion and forced migration. Talks and intensive discussions led by freethought are complemented by food, film, live performance and music.

Alongside each day’s programme of presentations and discussions, The Infrastructure Summit hosts several performative, reflective and communal moments across the weekend:

The Norwegian premiere of Things that turround us, a performance by Public in Private / Clément Layes, hosted in partnership with BIT Teatergarasjen (Bergen).

Infrasonic, a night of electronic music inspired by and exploring the sonic dimensions of the infrastructural condition with Hallucinator (Edward George and Anna Piva), Hannah Sawtell, Paul Purgas, and Louis Moreno (freethought).

Tickets are 350NOK / 200 NOK (student price) for both days, including lunch on both days plus entry to one night of Things that surround us and INFRASONIC.