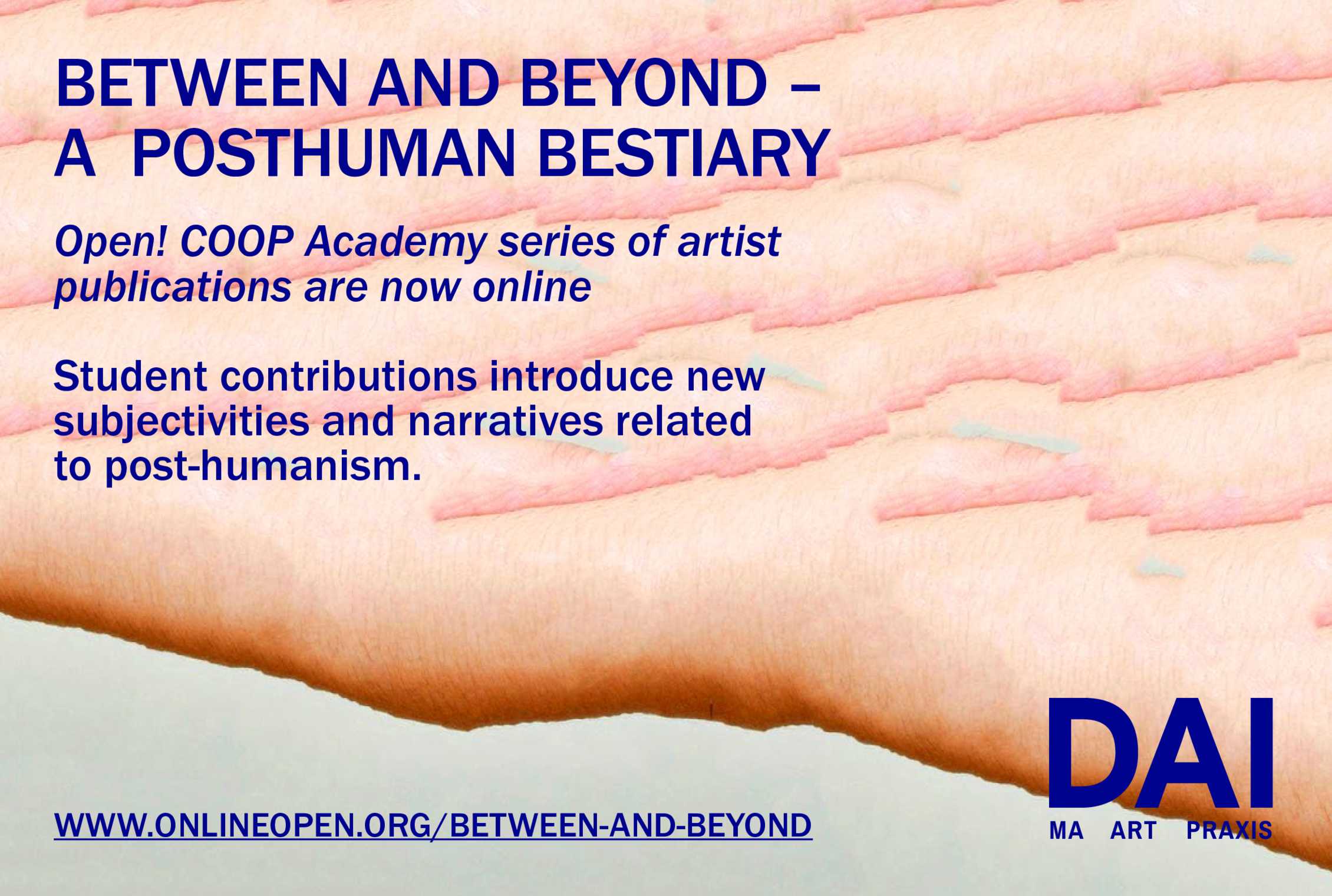 By the late twentieth century, our time, a mythic time, we are all chimeras, theorized and fabricated hybrids of machine and organism; in short, we are cyborgs. This cyborg is our ontology; it gives us our politics.
– Donna Haraway, A Cyborg Manifesto, 1983

For posthuman theory, the subject is a transversal entity, fully immersed in and immanent to a network of non-human (animal, vegetable, viral) relations. The zoe-centred embodied subject is shot through with relational linkages of the contaminating / viral kind which inter-connect it to a variety of others, starting from the environmental or eco-others and include the technological apparatus.
– Rosi Braidotti, The Posthuman, 2013

Between and Beyond, a series of artists’ publications, is the result of the 2015–2016 Open! COOP Academy Publishing Class at the Dutch Art Institute (DAI) MA Art Praxis based in Arnhem, the Netherlands, but international in its scope and assembly. As a partner of DAI Open! conducts thematical research and publishing projects on an annual basis, with a class of first- and second-year MA students using the Open! digital platform as the overarching discursive framework and site for presentation. You can find the results of last year's Publishing Class here.

The theme for this year’s Publishing Class was the ‘posthuman.’ The concept originated in the fields of science-fiction, contemporary art, feminism, queer theory and poststructuralist philosophies and literally means a person or entity that exists in a state beyond being human. Often reverting to Donna Haraway’s seminal essay A Cyborg Manifesto,1 first published in 1983, critical discourses around posthumanism seek to reconceive the notion of the liberal humanist and anthropocentric subject that has been dominant in Western culture since the Enlightenment. In questioning the central position of the human, critical posthumanism also involves the issue of the animal other, the inhuman, neo-materialism and the anthropocene. It is engaged in rethinking modernist dualisms between nature and culture, matter and mind, man and woman, man and machine, the human and the inhuman. If ‘Man’ is not the measure of all things, what should our frame of reference be, and what else than human are we becoming?

Posthumanism is also concerned with technologized and virtual bodies in the digital age, but should not be confused here with transhumanism, which regards man and technology as able to solve the world’s problems and aims at producing a supra human being. The critical notion of posthumanism we are interested in is much more about empowerment, rethinking and resilience within the current entanglements of technology, culture and nature.

In a series of seminars with guest tutors and the Open! editorial team, and with several face-to-face meetings, Open! COOP Academy Publishing Class has been exploring and discussing critical posthumanism – its ethics, politics and aesthetics. We read texts by Donna Haraway, Rosi Braidotti, Vilém Flusser, Baruch Spinoza and Jacques Lacan among others and worked on two publishing assignments. Each student-participant contributed to the printed group publication Between and Beyond – A Posthuman Bestiary. This compendium of ‘beasts’ provides physical and allegorical descriptions and illustrations of real or imaginary posthuman animals along with interpretations of the philosophical and political significance each animal embodies. Between and Beyond – A Posthuman Bestiary considers and represents new relationships and entanglements, questions old hierarchies, crosses boundaries and introduces new subjectivities and narratives.

Alongside the bestiary the student-participants developed (image) essays related to the main subject matter, but grounded in their individual interests and ways of working. This has resulted in a rich and heterogenous body of texts in which aspects of the posthuman appear without assigning it a fixed identity. The contributions of Giulia Crispiani, Malcolm Kratz and Miguel Ángel Rego Robles are concerned with the philosophical implications of human entanglement with developing technologies. Sebastian De Line, Despina Sevasti, Wayne Wang Lie Jim, Florencia Almirón and Zhenia Vasiliev are focused on the need to decentre the male and anthropocentric perspective in the social and political realm, while Valentina Curandi, Maike Hemmers and Mirjam Linschooten depart from the material entanglement of bodies, things and institutions to dislodge prevalent Cartesian dualisms. These contributions will be published on Open! in the coming months, together with a curatorial-editorial extension by Sonia Kazovsky, who provides an extra discursive layer by linking the texts to each other and to existing texts on the Open! platform.