14 July to 17 October, Sursock Museum: Let's Talk About the Weather: Art and Ecology in a Time of Crisis Curated by Nataša Petrešin-Bachelez and Nora Razian 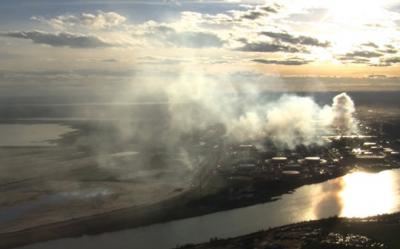 The exhibition will take place in the Special Exhibitions Hall, an 800-square meter exhibition space, and will feature over 15 local and international artists.

Let’s Talk About the Weather addresses urgent issues around a changing climate, future ecological disaster, and what this means for our present moment.

The term “Anthropocene” has recently been proposed to designate a new geological age that follows from the Holocene, the period designating the last 11,700 years of the Earth's history. As humans move from biological agents, that is as agents affecting their immediate environment to geological agents, affecting weather patterns and planetary biodiversity, a new way of understanding our impact on the planet is needed.

These ecological issues are as yet little explored from a regional perspective. However, recent developments in art practice and in civic discourse point to an increasing awareness of the urgency of climate change and the importance of activating discussions in the public sphere. This exhibition, and its accompanying publication and public program, will be the first time these themes have been creatively explored in Lebanon.

The exhibition will include local and international artists, architects, and thinkers, showing both existing and newly commissioned work. The project raises pertinent questions about how we understand and relate to “nature,” the relationship of climate change to social, political, and economic issues, while proposing alternative ways of understanding our impact in the world.

On a practical level, the making of the exhibition will seek to be as ecologically responsible and transparent as possible, with the aim to develop a guideline for sustainable production. On a discursive level, the project aims to initiate novel connections and dynamic conversations around art, sustainability, and ecological thinking that are crucial for mobilizing creative collaboration in the region and beyond.

A bilingual (English/Arabic) series of five small publications will be especially produced for the exhibition. Each publication will include five commissioned essays and visual contributions from regional and international contributor. Each book is organized around a material reference, one of the five “elements” – in this case, stone, wood, sky, water, and fire. Each element is a point of departure for more specific themes that relate to ecological concerns from a local-global perspective. The publications are edited by Ashkan Sepahvand in collaboration with the exhibition curators.

Nataša Petrešin-Bachelez is an art critic and independent curator based in Paris, France. She is currently editor of the online platform of the European museum confederation L’Internationale. In 2010 she was associate curator of The Promises of the Past, Centre Pompidou, Paris, and guest curator of Paris Photo. Curatorial projects include: Tales of Empathy, Jeu de Paume, Paris (2014), Resilience. U3 – Triennial of Contemporary Art, MSUM, Ljubljana (2013); Yona Friedman. Around Ville spatiale, Mala galerija, Ljubljana (2010); Conspire! Festival transmediale 08, Haus der Kulturen der Welt, Berlin, Germany (2008); Distorted Fabric, De Appel, Amsterdam, The Netherlands (2007).

Nora Razian is the Head of Programs and Exhibitions at the Sursock Museum. Before joining the Sursock Museum in 2015, Razian was curator of public programs at Tate Modern and Tate Britain from 2009 till 2015. She has also taught at the Goldsmiths' College Center for Arts and Learning. As Head of Programs and Exhibitions, Razian curates the Museum’s temporary exhibitions, public programs, and film program, and initiates collaborations with other arts organizations.

Ashkan Sepahvand is a writer, translator, and researcher. From 2012-2014, he was a research fellow for "The Anthropocene Project" at Haus der Kulturen der Welt, where he co-edited the publication “Textures of the Anthropocene: Grain, Vapor, Ray” (MIT Press: 2015). His work and writing have been presented at dOCUMENTA (13), Ashkal Alwan, Institute for Contemporary Arts London, Former West, Sharjah Biennial X, Al-Ma’mal Foundation, the Barber Shop, Kunstwerke, and Kunsthaus Bregenz. He lives and works in Berlin.