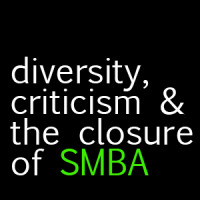 *The event will be preceded by the second lucky draw of Parasite Lottery, a collective experiment proposed by Wok The Rock and Casco, at 19:00 hrs.

The decision to close down Stedelijk Museum Bureau Amsterdam (SMBA) has been received by the media and the art world without much ado. SMBA, a semi-autonomous presentation space for experimental art in Amsterdam run by the Stedelijk Museum, opened its doors in 1993 amidst various art galleries in the Jordaan. In the retrospective publication We Show Art: 10 Years SMBA from 2004, art historian Rogier Schumacher argues that SMBA has, in large part, furthered the legacy of the Stedelijk Museum as an institution that promotes vanguard art. Furthermore, its bolstering of a global perspective has laid bare the intricate links between modern art production, canonization, and Western hegemony. In brief, SMBA has constructively contributed to the diversification of the Stedelijk’s institutional practice, while securing attention for post-colonial issues of art representation.

The discontinuation of SMBA—in its current form—is an occurrence that Kunstlicht believes should be marked more resoundingly. With this moment approaching, the editorial board of the journal seeks to publicly evaluate the closure and its impact, against the backdrop of recent changes in the art field of the Netherlands. These changes will be explored in the upcoming Kunstlicht issue that focuses on a temporary subsidy programme of the Dutch Ministry of Culture (OCW). The programme is called The Art of Impact and aims to reframe the arts as a productive field that is well suited to contribute to solutions for societal issues. Simultaneously, art as a territory for critique is being marginalized in the context of a city that is transforming along the lines of profit.

The Stedelijk Museum’s press communiqué of December 2015 announced the planned closure of SMBA, as of July 2016. It mentions a successor of SMBA in the form of a new space “that complements [the Stedelijk’s] practice, the program in the capital, and the polyphony of nationalities within this dynamic context”. Even more recently the museum announced the formation of a research team debating the form and content of the new space.

While maintaining a position outside the structures of the Stedelijk itself, Kunstlicht is hoping to instigate a constructive debate regarding the formation and re-formation of art spaces in Amsterdam. How could a successor of SMBA deliver greater impact, and why should the current institute be closed down? We also want to consider the closure of SMBA as an instance to raise questions that concern the presence of diversity and criticism in the art world and in society at large—to once more reflect on the role SMBA has played in this constellation, to appraise what is at stake in its closure, and to consider what may yet be possible for SMBA’s next chapter.

Note: For the expenses of this programme there will be a donation box available

Panelists:
- Prof. Dimitris Dalakoglou is chair of Social Anthropology at the Vrije Universiteit, Amsterdam
- Irene Fortuyn is an artist and director of KETTER&Co. She is the head of the department of Man & Leisure at the Design Academy Eindhoven, a tutor at the Royal Academy The Hague, co-founder of LabMinds, and a boardmember of W139.
- Patricia Kaersenhout is a visual artist, lecturer, cultural activist and advisor at Mondriaan Fund
- Jack Segbars is a graphic artist, curator and writer, and board member of Platform BK
- Vincent van Velsen is a freelance researcher, writer, art critic, and curator
- Vivian Ziherl is the founder of Frontier Imaginaries and curator of the 8th Jerusalem Show

Moderators:
- Angela Bartholomew is a PhD Candidate at the Vrije Universiteit, Amsterdam where her research focuses on the relationship between institutional mediation and artistic practices in the 1980s and 1990s.
- Hendrik Simons is the Co-Founder & Curatorial Director of Project Space Amsterdam, a new initiative of the students of the Vrije Universiteit, Amsterdam, and the Art Director of Konstrukt Label & Events.