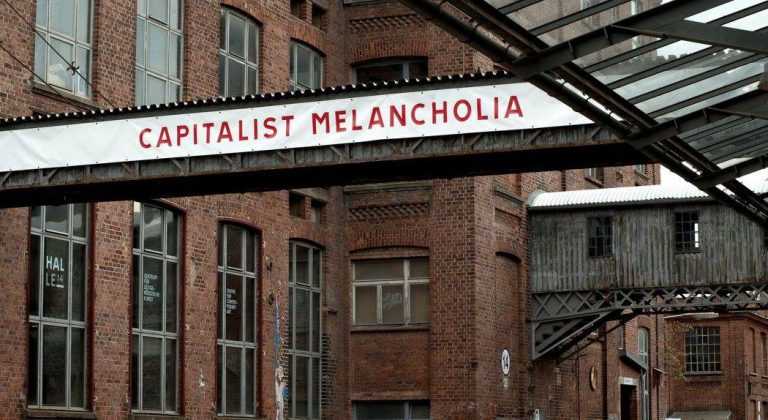 A symposium-performance curated by Aliocha Imhoff & Kantuta Quirós
in the context of the project Capitalist Melancholia (cur. Michael Arzt, Francois Cusset, Camille de Toledo).
Scenography by Antonia Kamp.
With the support of Halle14 and Fonds Perspektive.

Ladies and Gentlemen, the Government of Times will convene the 28th May in Leipzig, in order to negotiate the times to come - those for which we're struggling -, the next regime of historicity.

No one doubts that an order of time exists — or rather, that orders of time exist which vary with time and place. Historian François Hartog explored crucial moments of change in society’s "regimes of historicity" or its ways of relating to the past, present, and future. According to Hartog, contemporary Western societies have entered from 1989 a new “regime of historicity” in which the present has become omnipresent. The present is therefore experienced as an acceleration of our social lives and finally as enclosure where the perspective of the future is no longer reassuring, since it is perceived not as a promise, but as a threat. We would call also this tyranny of the present through a social acceleration – to accelerate to be at a standstill – melancholia.
As a way to put time back in motion, new wave of contemporary accelerationism as social emancipation recently emerged, . The only way out of capitalism would be to take it further, to follow its lines of flight or deterritorialization to the absolute end, to speed-up beyond the limits of production and so to rupture the limit of capital itself. Nevertheless, as Benjamin Noys argued, speed is, still, a problem. Our lives are too fast, we are subject to the accelerating demand that we innovate more, work more, enjoy more, produce more, and consume more. Hartmut Rosa declares that today we face a ‘totalitarian’ form of social acceleration.
What interests us is a further turn of the screw of this narrative. How can we set time back in motion, to liberate us from the presentism to which we seem compelled - in Europe particularly ? What is the relationship between past, present and future we need to invent and deploy for the future? What politics can we initiate to provoke a new shift ? The symposium-performance A Government of Times tends toward a new politics of time, a possibility to govern the times differently. We are inviting theorists, poets, artists to propose an advocacy for a new regime of historicity and to come and negociate it. Aliocha Imhoff & Kantuta Quirós

Participation fee: 4 € / 2 € (entry to the exhibition is included).
Language of the lectures: English.