May 26, opening at the Van Abbemuseum: Boudry/Lorenz ~Normal Work & Toxic 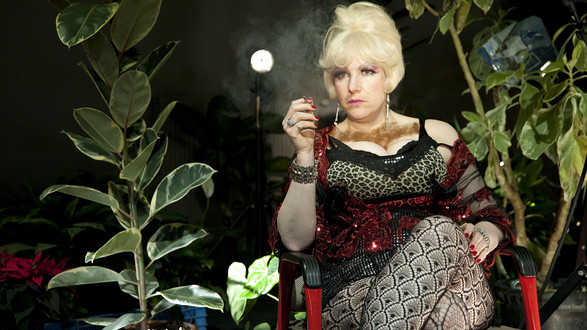 The film installations Normal Work and Toxic by Boudry/Lorenz are based on performances, examining the history of photography and its relationships with sexual identity and lived intimacies. The body is central to their work, an instrument to rework social, cultural and political power structures. Boudry/Lorenz destabilize norms, creating space for different knowledge and experience to emerge.

Re-focusing on questions of gender and sexual identity, and their relationship to positions of power, feels urgent at a time when these complex debates appear both more open and closed than ever before. In the two film installations Boudry/Lorenz challenge the notion of fixed identities from a historical perspective. Normal Work (2007) concerns the way in which Hannah Cullwick, a servant in 19th century Victorian England, broke down views on gender and social class through photography. In Toxic (2012) the power struggle between the photographed subject, the photographer and the observer have a central place.

Normal Work & Toxic is one of a number of projects at the Van Abbe in 2016 that examine queering as a methodology for engaging with the museum.

Normal Work
The starting point for Normal Work is the relationship between Hannah Cullwick, her employers, and her lover Arthur Munby. Boudry and Lorenz discovered Cullwick’s diaries, letters and a number of remarkable photographs in the Munby Archive, Trinity College Cambridge: Cullwick shows herself not only as a maid, but also as a bourgeois lady, as a bourgeois man or as a male slave. Her muscular physique and rough dirty hands, as a result of the heavy work, played an important role in her relationship with Munby, with whom she conducted a sadomasochistic love affair and re-enacted scenes from her work life. The photographs act as a crossing of the different codes of conduct of the time based on social class, race, and gender. 150 years later performer Werner Hirsch restages Cullwick’s poses in Normal Work, creating a fascinating dialogue between Cullwick, Hirsch, the directors and viewers of the film and relating Cullwick’s crossings to today’s neoliberal conditions of labour.

Toxic
In Toxic, Boudry/Lorenz explore the concept of toxicity in relation to film/photography on the one hand and to sexuality on the other. The video starts with a series of re-enacted “mug shots,” a form of photography that has been used by the police since the 19th century in order to record, and therefore stigmatize, criminals, prostitutes, homosexuals, and people from the colonies—in short, those who deviate from the norm. Wearing masks, the subjects portrayed in Toxic make a mockery of this recording process.

Boudry/Lorenz start from the premise that it could be useful to see not only substances—chemicals or parts of plants for instance—as toxic but filmic apparatus as well: its history since the 19th century, its social effects, and the way with which we continue to work with it today. Toxins can kill, but also heal, provided they are administered in the correct doses. As the work progresses Toxic degenerates into a rebellion against the film protocol.

Boudry/Lorenz
Pauline Boudry and Renate Lorenz live and work in Berlin. They started their collaboration in 2007 and often work with the same performers, in this case, Werner Hirsch and Ginger Brooks Takahashi.

Donated to the collection
Normal Work and Toxic were recently donated to the Van Abbemuseum by Eindhoven collector Maurice van Valen.

The Boudry/Lorenz exhibition is part of The Collection Now.