2016 ~ COOKING THE NEW PLANET ~ DAI commissioned a temporary work by Lado Darakhvelidze (DAI, 2010) as a parallel public event during Sonsbeek 2016. 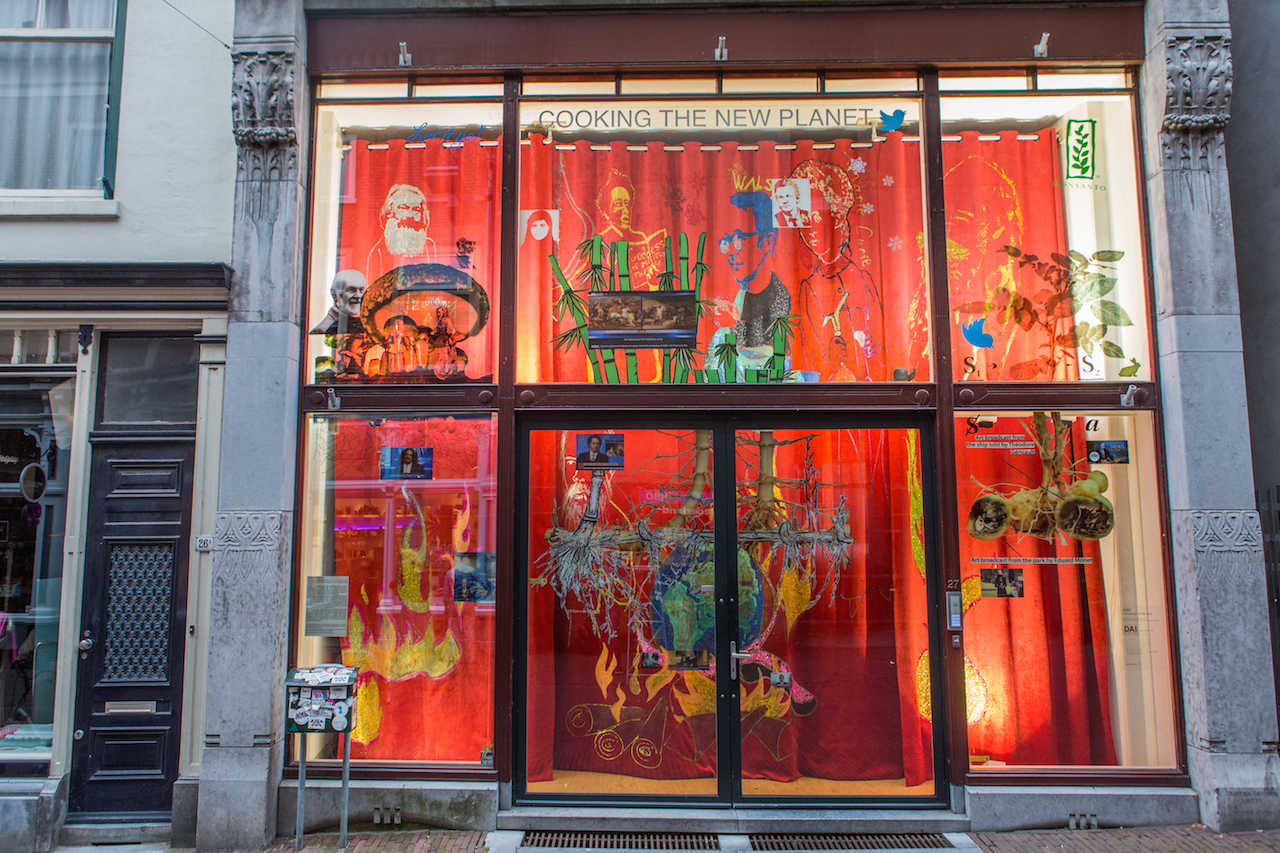 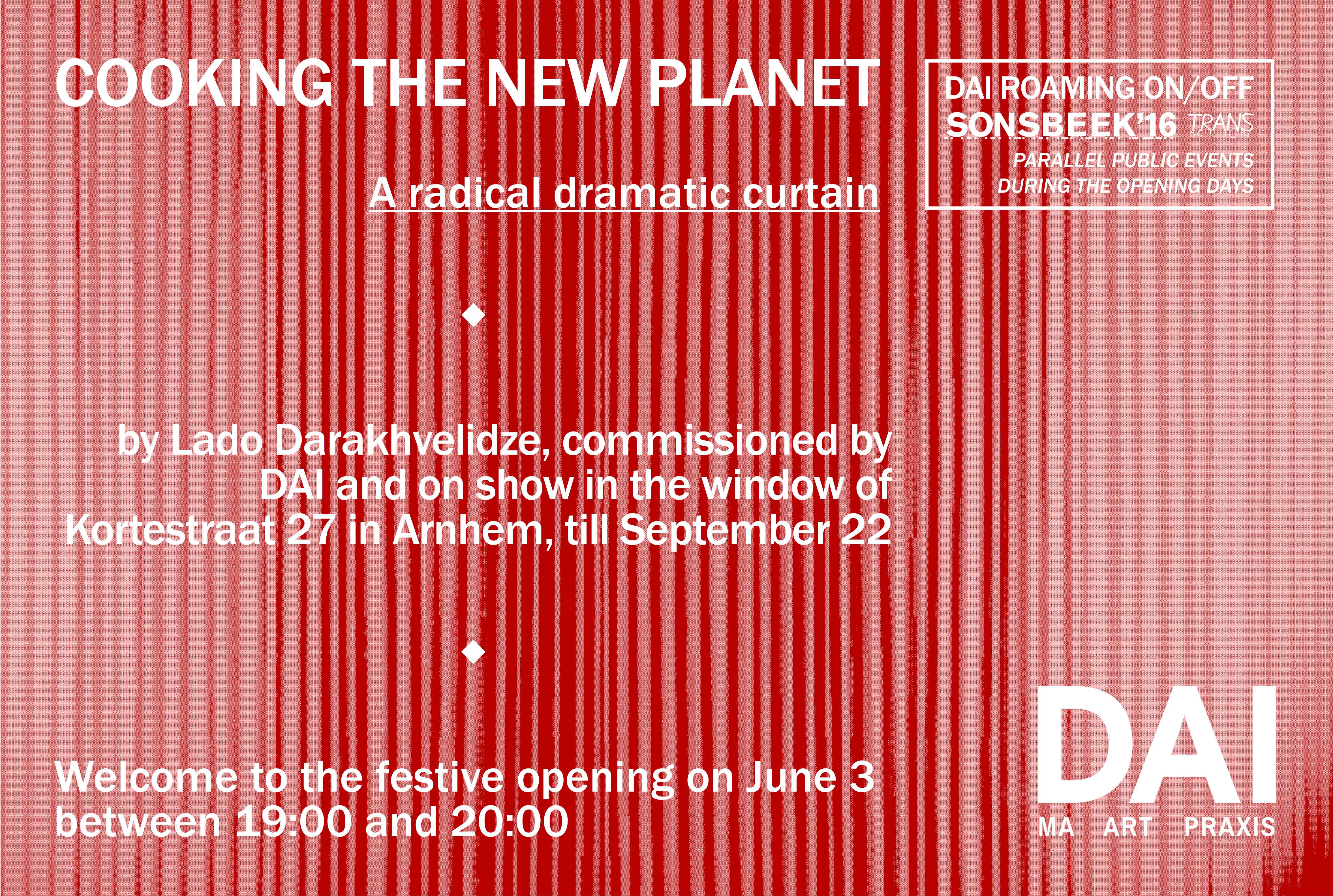 "Cooking the New Planet" was commissioned by the Dutch Art Institute (MA Art Praxis @ ArtEZ University of the Arts) and will be on show in the window of Kortestraat 27 till September 23, 2016.

Lado Darakhvelidze graduated from the DAI in 2010 and lives and works between Georgia’s Caucasus Mountains and Arnhem, the Netherlands. 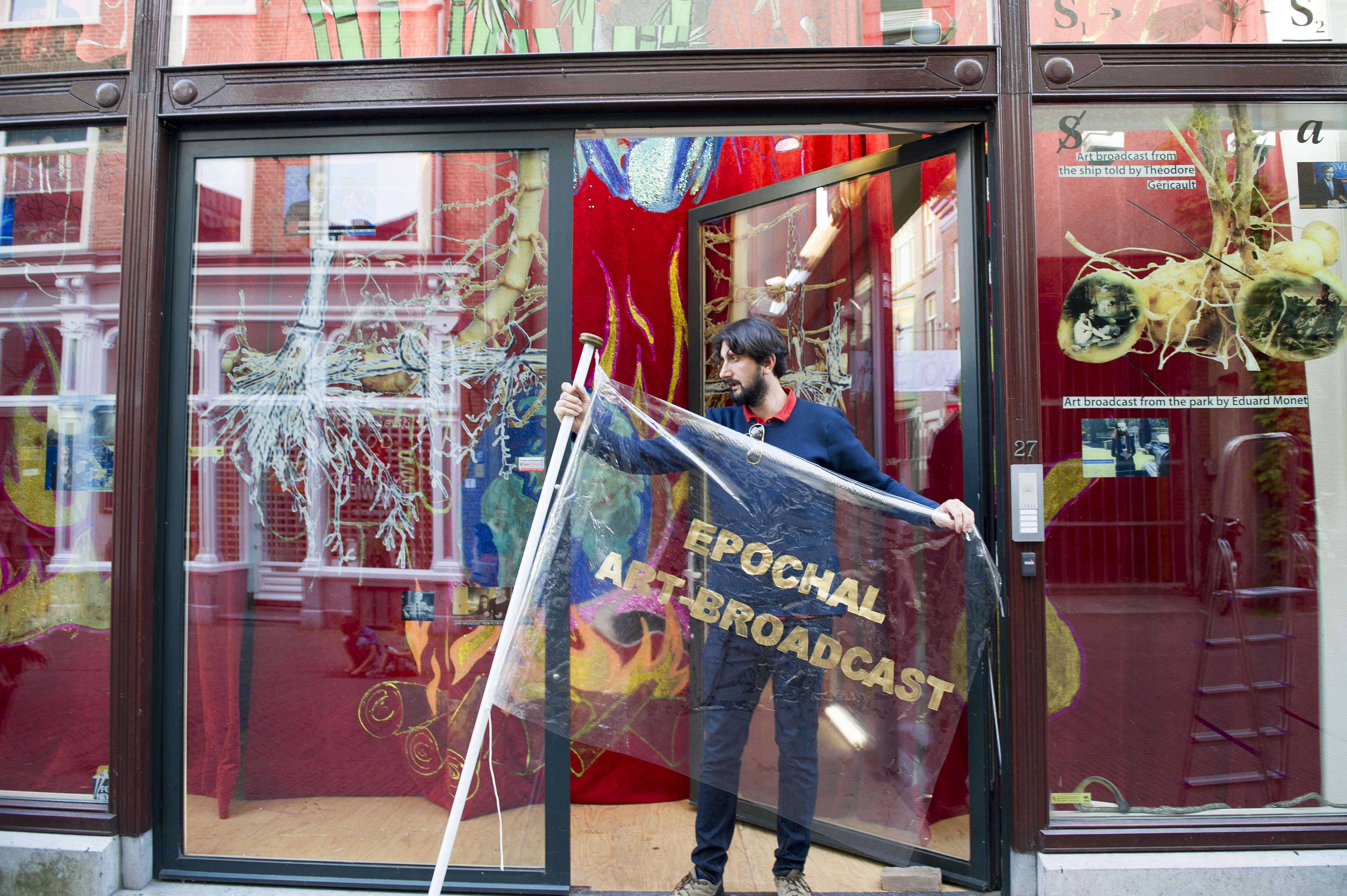 If, as artist Lado Darakhvelidze says, we are all in the process of ‘cooking the new planet’ together, which recipes are we going to use? Revisiting old recipes with new ingredients and new chefs, Darakhvelidze’s newly commissioned work, “Cooking the New Planet” juxtaposes historical figures such as Karl Marx and Fyodor Dostoyevsky with their ideological descendents, in this case, Slavoj Žižek and Mikhail Bakhtin, generating tongue-in-cheek imagery of the heritage of leftist ideology.

Darakhvelidze’s dramatic red velvet curtains hang behind the glass of the front window of the Dutch Art Institute. He has layered images of recognizable historical icons with what he calls allegories of the media: the [twitter] bird and the fox [of Fox news]. Building on the epochal broadcasts on basic human issues and virtues by artists like Francisco Goya and Diego Velázquez, Darakhvelidze’s work is in line with and inspired by artists and artist groups such as Aleksandr Medvedkin, The Yes Man, Superflex, Petr Pavlensky, and the Critical Art Ensemble. These ‘art broadcasts’ crisscross various fields and territories, including politics, natural sciences, and the economy. In the same way, Darakhvelidze’s images of media logos superimposed on glittery, almost gaudy, sketched human figures, have a rhizomatic appearance connecting today’s media-centric activism, artists, theoreticians, and iconic figures of the past to the viewer and the architectural space. The site specificity of this work becomes more pronounced when considered in light of Pythagoras and the acousmatic teaching technique (where the master teaches behind the curtain in order not to distract his pupils with visual stimulation). With this installation situated at the threshold of DAI, one cannot help but wonder what’s behind the veil. (MM)

Hybrid artist-journalist-broadcaster, Lado Darakhvelidze creates flexible platforms for people to participate in his work which is an equal mixture of aesthetics and politics. 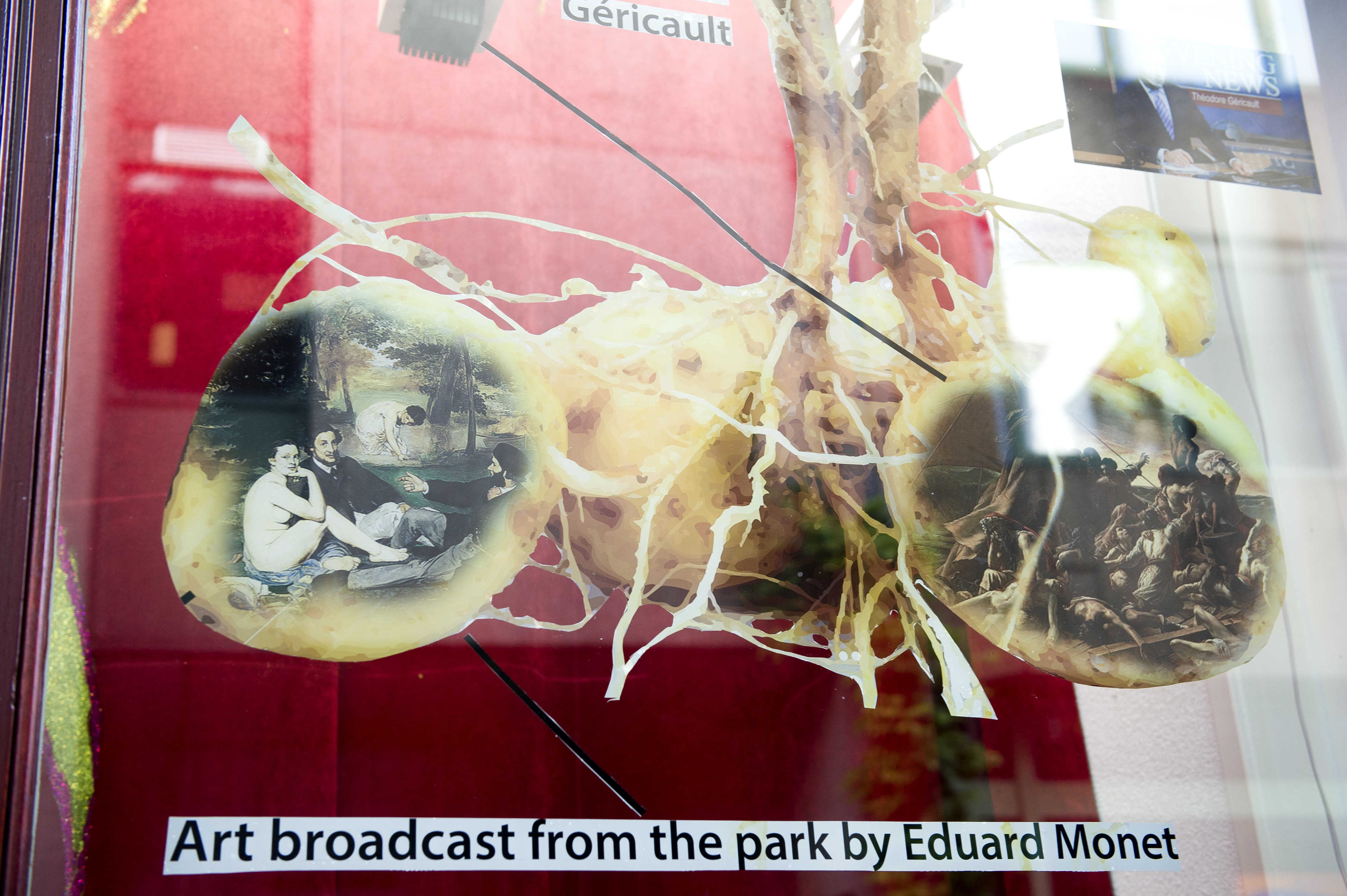 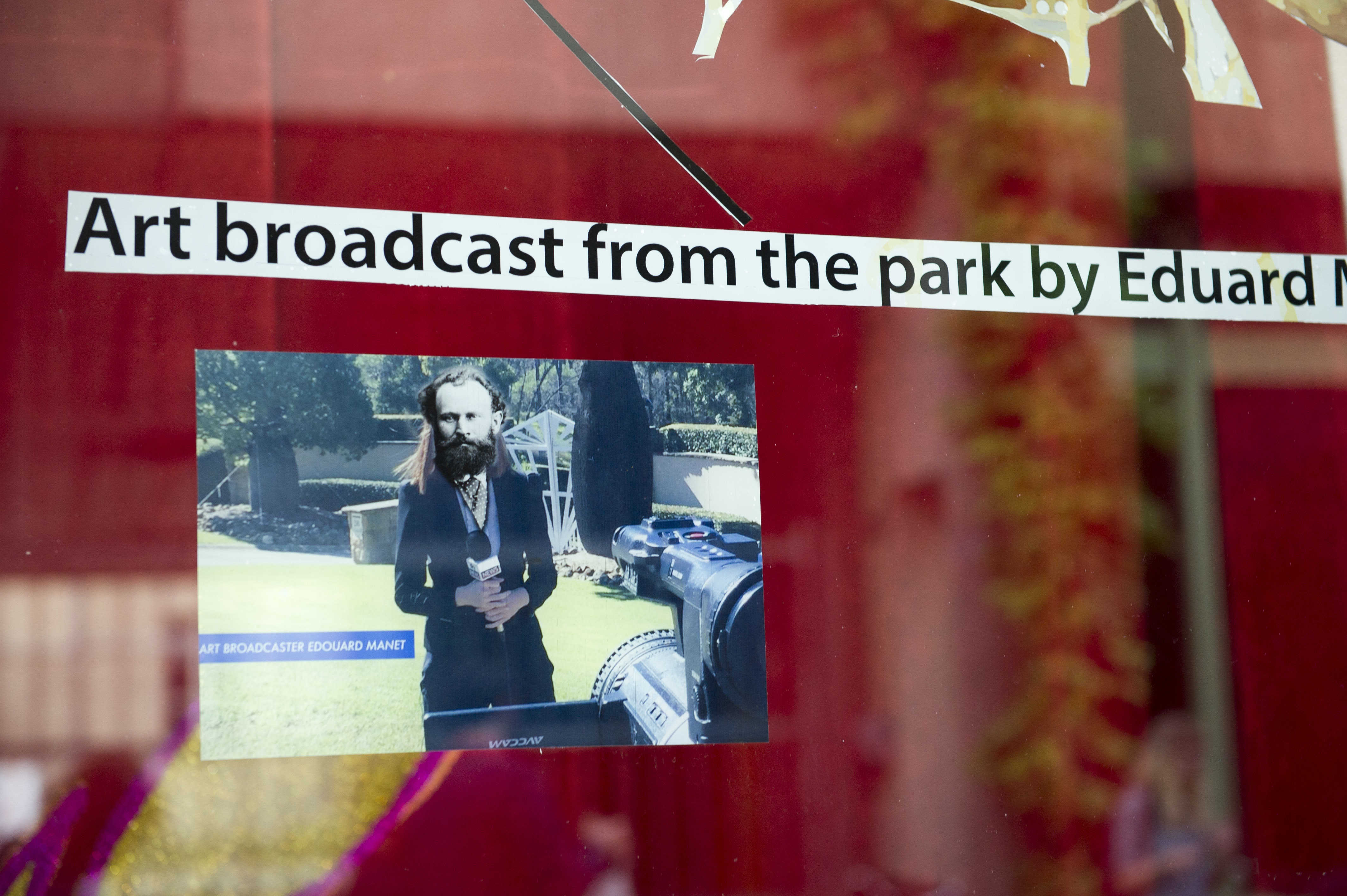