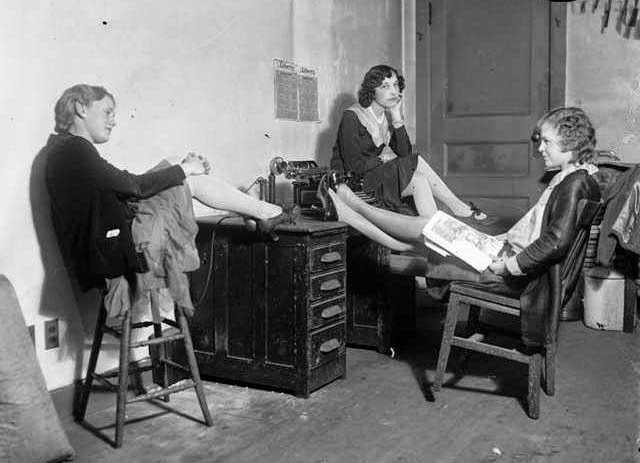 The afternoon session is usually devoted to discuss some of the APRC member's research current status. In this occasion, the discussion was centred on Rosie Heinrich's and David Maroto’s respective researches.

Taking her cue from the previous APRC session, Rosie discussed the role of the narrator in her video work We Always Need Heroes (working title), also in relation to the other voices that appear in her work, and parts of the narrator's script she is currently writing. We Always Need Heroes is a multi-layered research project around the psychological and social dynamics following Iceland’s financial and economic crash in 2008. Between the sequences that form the video work, a narrator offers commentary on the unfolding events. Rosie uses her stammer as a tool to explore the notion of the narrative as a reflex and ‘corrupted’ speech.

David offered for discussion his PhD thesis, titled 'Artist's Novels: The Novel as a Medium in the Visual Arts'. Its first half is a 'conventional' academic essay focused on four key case studies of visual artists who employ their novels in their art practice. The second half of his research will be a narrative account of the process of creation of a new artist's novel. He is commissioning one through an open call (The Novel As Fantasy, in CCA Warsaw), and is going to accompany the process for over two years. The narrative account of such process will take the form of a Novel. The discussion was focused mainly on the research methods that he is going to employ in order to study such process.

In the second part Antke Engel and Marcelo Rezende took the lead in order to discuss issues concerning 'curating research'. They each selected one of their projects that they consider most salient in relation to their curatorial and research practice.
Antke presented 'Bossing Images. The Power of Images, Queer Art, and Politics' (2012–14), which she curated together with Jess Dorrance (writer, curator and activist based in Montreal). In her own words: 'The idea was to create 3-hour events, where participants experience and transform dynamics of power and desire in encounters between three guests, one of them an art work, an architectural setting and particular communication formats.'
Antke carried out a short introduction in order to explain the basic ideas and structure of the series. The rest of her presentation was dedicated to common discussion.
Please refer to the blog: http://bossingimages.tumblr.com

Marcelo proposed to discuss 'The archaeology as a method'. The idea was to promote an open discussion regarding such possibility (the archaeological procedure) as a tool to read the cultural phenomenon. Issues for the discussion (accompanied by a projected set of images) consisted in:   a) the modern project as dig it down procedure b) the anthropological gesture c) ethnography as an exhibition Marcelo spoke of his experience on the practical, political and intellectual side of these issues, primarily around his curatorial practice in the Museum of Modern Art of Bahia (2012–15) and as the artistic director of the 3rd Bahia Biennial (2014). Equally important for him was to listen to everyone’s experiences: how we could all relate to that in our particular researches.

In the evening, a third part of the session, open to all DAI students, was conducted by Fotini Gouseti and Patrícia Pinheiro de Sousa. They gave a presentation of their recent projects. Each displayed a research trajectory that was initiated during their academic training at DAI, and has been extended in their professional artistic activities. Each presentation was followed by an open discussion with the audience.

During her presentation, Fotini examined three research based projects that she has been busy with in recent years. All three departed – either in the literary sense or as an idea – as a full time obsession throughout her studies at DAI.
1) The Least Wanted Travel the Most (ongoing), which is an attempt to map different cases of migration in Europe. In this project, dinner sets are equated to people that leave the place of their origin due to discomfort, in order to search for solutions.
2) Renkonto (2014). It is a positive and joyful meeting point with actual people from neighbouring countries who happen to have intense and often conflictual diplomatic relations. A three-day wedding celebration took place in Krusevo. In cooperation with Obsessive Possessive Aggression (O.P.A), an initial meeting made up of artists from both countries took place.
3) The Present as a Result of the Past (ongoing) is a research on the ways Kalavryta society evolves after WWII trauma. Today, Kalavryta faces, as does the rest of Greece, the challenges of the economic, social and ideological crisis.

Patrícia’s presentation was centred on 'The Third Landscape', a project that consists of an artist book, a short film, a lecture-performance and two installations. The presentation focused on the publication, as well as her interest in the recent Portuguese history and its fragmented knowledge production. This artist’s book presents a selection of images and texts that depart from a photograph made by Agnés Varda, in Póvoa do Varzim, a town in the North of Portugal, in 1956. Its visual representation was left out of the book. Instead, a selection of seven other images, make a constant attempt to reconstruct the original photo. This photograph, or its absence, becomes the thread along which a fictional narrative defines a fragmented structure, and where the story appears in different forms and temporalities. Both, text and image reflect an interest on the chaos and discontinuity of Portuguese contemporary history, portrayed by a constant need for solid views.