Fotini Gouseti (DAI, 2013) presents the project The Least Wanted Travel the Most in the homonymous exhibition at Joey Ramone Gallery 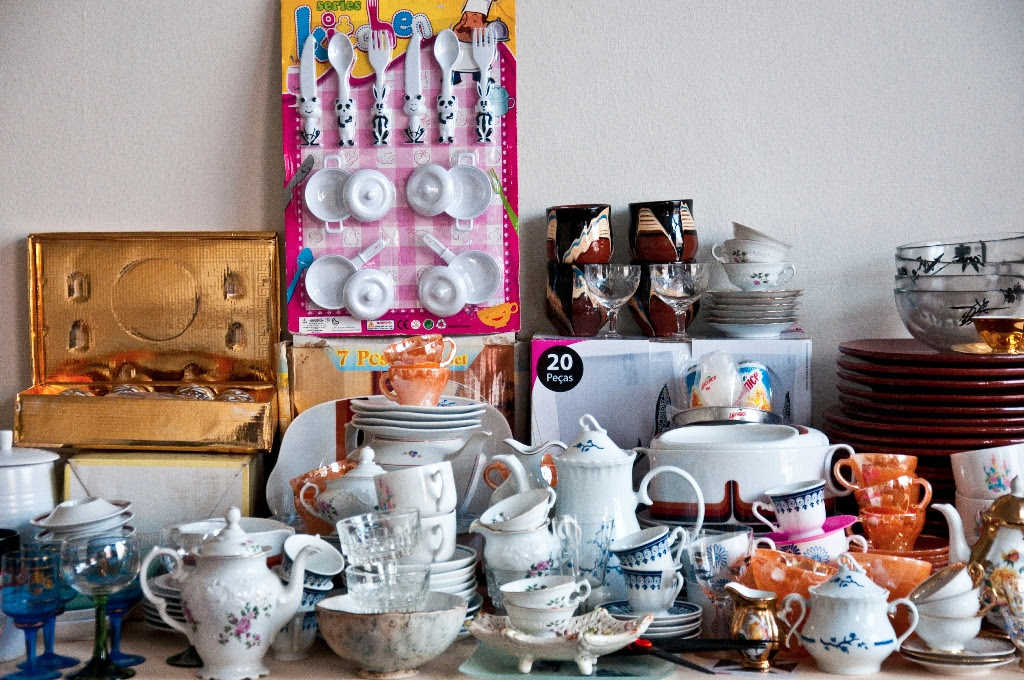 Joey Ramone is proud to present the exhibition The Least Wanted Travel the Most with work by Roi Alter (IL), Tudor Bratu (RO/NL) and Fotini Gouseti (GR). The exhibition opens on Thursday 11 February, 6 - 8pm and runs till Saturday 12 March 2016.

The title of the exhibition is borrowed from Fotini Gouseti’s on-going project, which is inspired by a custom found in areas of Macedonia, where a dinner set is a very typical wedding present. Newly married couples end up with many more dinner sets than they could ever possibly use. They keep what they need, exchange some at shops, and keep the rest in order to offer them as wedding presents at some other wedding. As a result ‘the least wanted dinner sets’ travel endlessly.

During the course of the exhibition the public is warmly invited to contribute to this project by donating their least wanted dinner set in order for it to travel.

It is up to them to decide what a less wanted dinner set could be. Maybe one that was offered to them but they don't like and don't want to use? Maybe a dinner set that is not in fashion? A very cheap one? One in bad condition? Maybe one that is "too much"? Or...

Gouseti is very interested in the story behind this ‘least wanted item’ as well, therefore she invites the visitors to contribute their stories and explanations!

It takes on the format of ancient art, reminiscent maybe of an altarpiece, a format always used for expressing firm beliefs and moral rules in addition to an artist's personal artistic dispositions. Its seemingly mathematical characteristics give it a sense of objectivity while the content is knowingly exaggerated and accentuated. Being a biased impression of Jerusalem and expressing a firm political opinion is not leaving that opinion open for any speculation.

“Seated for a coffee, my father recalled the story of his third wife. It was 1986, at the height of Romanian Communism, when my mother remarried a Dutch man and the three of us moved to The Netherlands. “I realized I would never see my son again”, my father said, “and I decided to ask asylum in Switzerland,” he continued, “but I knew I could not leave Romania as a single man with an anti-communist past”. He inhaled the smoke deeply while talking: “I asked her to marry me knowing I would marry her just to be able to leave the country”. My father loves me with a fierce love.”

- Tudor Bratu, Excerpt from ‘For Cigarettes’

Taking the traveling of the dinner sets as a starting point the exhibition questions mobility, relocation, diaspora, while examining the reasons leading to this being social, religious, economic. In the context of the exhibition mobility is examined in relation to spatial movement of humans and objects. Thus it brings together some of the purely ‘social’ concerns such as inequality, power, hierarchies, with the ‘spatial’ concerns of geography such as territory, borders, scale and the ‘cultural’ concerns of anthropology and media studies such as discourses and representations while inflecting each with a relational ontology of the constitution of subjects, spaces and meanings.

In between cultural geography, transport geography and the anthropology of circulation, although different in scope, focus and methodology, Alter, Bratu and Gouseti’s projects deliver a poetic reflection confronting the myths and experiences of their subjects while posing questions with a critical eye.