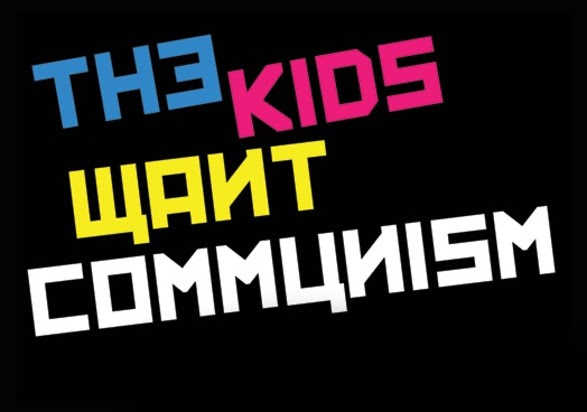 Spectres are haunting Earth—the spectres of anti-communism. From Wahhabism to neoliberalism, overproduction to debt, the disastrous "war on terror" to the genocide of the welfare state, and from cold war game theory to cybernetics' networked offspring, the internet—these are all anti-communist projects that came back to haunt us. In this apocalyptic climate, where CO2, ISIS and HFT (High Frequency Trading) stand for the self-annihilation of this civilization on a cultural, economic, political and biological level, we propose The Kids Want Communism. This ongoing clandestine and public series of events marks ninety-nine years to the October Revolution.

"Communism" might sound like an irrelevant term for many people today, but more than any other word in our political vocabulary, communism is the radical negation of the current regime which celebrates exploitation and inequality. It is a cosmos that was devoured by the black hole that is 1989–91. This cosmos includes many communisms; an epic reestablishment of property-free communities, communal indigenous societies, real-existing socialism with its achievements and crimes, the long history of anti-Fascist resistance, egalitarian mysticism, the dialectic abolition of capitalism through its internal dynamics, the uncharted, un-exploitable pockets of resistance that cannot be appropriated by capitalism, the already present humane solidarity and camaraderie shared by people everywhere and the political proposal of the emotion called "love." It is a hypothesis of universal emancipation, an actuality to be revived.

The Kids Want Communism operates as a constellation of moments and movements, inviting histories and practices, gestures and ideas. It seems fitting to recall Chris Marker's closing statement from The Last Bolshevik, his profile of Soviet film director Aleksandr Medvedkin, here. Marker comments about how the great Soviet filmmakers are regarded as dinosaurs today, and then adds: "but look what happened to the dinosaurs. Kids love them."

The Kids Want Communism is a joint project of numerous individuals and organizations, which will host its exhibitions, screenings, discussions, seminars and publications in a variety of locations; among them Tranzit, Prague; Free/Slow University of Warsaw; State of Concept, Athens; Škuc gallery, Ljubljana; Visual Culture Research Center, Kyiv and MoBY-Museums of Bat Yam. During 2016, MoBY-Museums of Bat Yam will dedicate its program to this yearly theme.

Visit tkwc.tumblr.com blog for more information on the program and schedule.