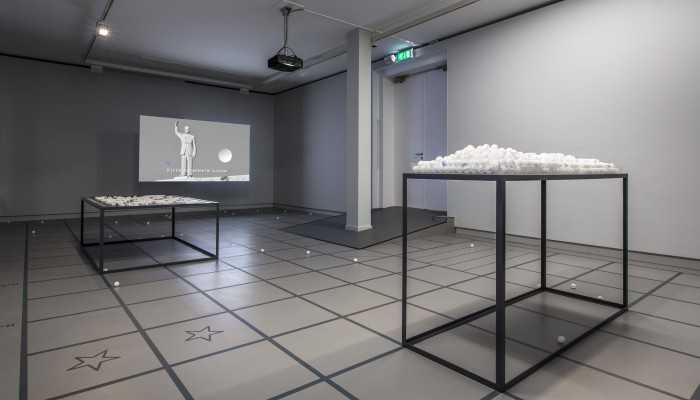 HACKING HABITAT.ART OF CONTROL is a large-scale, international exhibition on the cutting edge of art, technology and social change that will open on February 26th, 2016. More than eighty internationally acclaimed artists and designers will exhibit new and existing work in the former prison at Utrecht Wolvenplein. Foundland will be presenting “Scenarios for Failed Futures” (video, 2015) and “Extended Borders” (installation, 2015).

“Scenarios for Failed Futures” is based on interviews with Yassin Elsrakbi, father of Foundland member Ghalia Elsrakbi. Having recently fled Syria, he now lives in Cairo. He fanatically collects news about his homeland from numerous sources to get a grip on the reality of what’s going on. In the film he gives his analysis of the past and the present in the Middle East. Foundland mixes his stories with conspiracy theories, creating future scenarios for Syria. Foundland explores how fiction may be able contribute to the processing of traumatic experiences. The media gives only a partial portrayal of reality. Do we have to supplement the image of our world as portrayed by the media with fictional outcomes in order to better understand our reality?

The work “Extended Borders” pays homage to the Syrian activists who in 2011 became known worldwide with a viral video protest against the Assad regime. Thousands of ping-pong balls with the Arabic word for “freedom” written on them, rolled downhill to Damascus by night. The next morning, streets, squares and parks where covered with them. Foundland wrote the coordinates of flight routes from Syria via Turkey to Europe on the ping-pong balls, as well as the coordinates of places where ships with refugees on board have sunk.