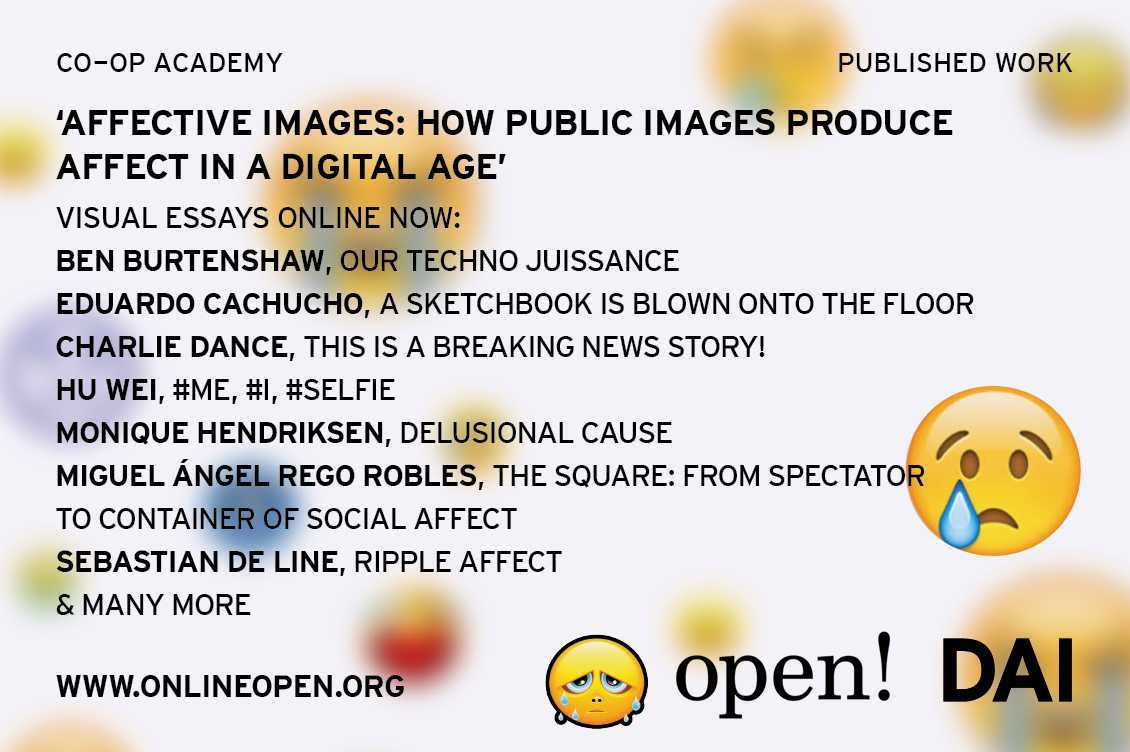 As a partner of the Dutch Art Institute (DAI), Open! Platform for Art,Culture and the Public Domain undertook a research and design project with an international group of first- and second-year Master of Fine Arts students in the academic year 2014–2015 on the functioning of ‘affect’ in the digital network-and-image culture. Open! considers this subject important because – within the scope of a better comprehension of the workings of mediatization and digitization processes for the public sphere, one of its editorial leitmotifs – an understanding of affect can help us gain greater insight into how the digital environments in which we increasingly find ourselves affect us and influence our actions in the personal, social and political senses. The influential essay ‘The Autonomy of Affect’ (1995) by Canadian philosopher Brian Massumi was the starting point for our investigations. Referring to Baruch Spinoza and Gilles Deleuze / Félix Guattari, Massumi construes affect as “a pre-personal intensity corresponding to the passage from one experiential state of the body to another and implying an augmentation or diminution in that body’s capacity to act.” Affect therefore has to do with a sphere of experience which falls outside the dominant paradigms of representation and with unconscious processes which underlie our behaviour and influence our attitudes towards the world around us.

In a series of seminars with guest tutors that included Brian Massumi1, we asked: How is affect being produced and transmitted in today’s digital environments? What sort of role does it play in the networked society in terms of the formation of subjectivity? What about the aesthetics and politics of affect? Can affect be defined as a critical departure point for curatorial and artistic practices? If anything subsequently became clear to us, it was that affect is a complex and hard-to-grasp notion that does not easily lend itself to being used as a theoretical, artistic or activist tool. In itself, the concept is neither good nor bad in the ethical or aesthetical sense, and different disciplines – the neurosciences, social sciences, art-and-media theory – approach and apply it differently, although ‘The Autonomy of Affect’ is a recurring reference point.

In his generous seminar, which included a closed masterclass as well as a public lecture, Massumi emphasized again that affect always is a movement from one experiential state of the body to another, that it is relational by nature and that it always concerns ‘to affect and being affected’. Precisely because it is about movement and therefore about change and becoming, affect has a political dimension: affect can govern a transition. “Politics, approached affectively, is an art of emitting the interruptive signs, triggering the cues, that attune bodies while activating their capacities differentially,” according to Massumi.2 Politics can instigate certain affective fields, and for instance create an atmosphere of fear, such as George Bush did after 9 / 11. Against this, Massumi sets the possibility of ‘affective alter-politics’, which he considers dissensual “in the sense that it holds contrasting alternatives together without immediately demanding that one alternative eventuate and the others evaporate. It makes thought-felt different capacities for existence, different life potentials, different forms of life, without immediately imposing either a choice – or a compromise – between them.”3

Initially, the main emphasis of our investigations was on examining how public images (the course at DAI was called ‘Affective Images: How Public Images Produce Affect in a Digital Age’) play a role in affective conversion processes. We understood ‘public images’ to be mediated images that are engaged in public political discourses. These could include amateur images as well as news images and artistic images – ranging from photos of Abu Ghraib to the ISIS videos or images of public art works. We focused on how these images conceal ideological layers and produce affect.

Gradually, however, we also became interested in technological or digital interfaces and their affect. Realizing that we are continually in and around the media in our daily lives and that we have developed a symbiotic relationship with technology, we focused on the interface, that ubiquitous and largely hidden layer between human and machine that permanently shapes our view of the material, the social, the political and the technological. “The moment of impact is like an interface to affect and being affected,” according to Massumi at the DAI seminar. What interested us philosophically about the interface was the Massumian ‘threshold’: “When you affect something, you are opening yourself up to being affected in turn, and in a slightly different way than you might have been the moment before. You have made a transition, however slight. You have stepped over a threshold. Affect is this passing of a threshold, seen from the point of view of the change in capacity.” In terms of media theory, we took inspiration from Alexander Galloway’s The Interface Effect, in which he describes the interface as “an autonomous zone of aesthetic activity, guided by its own logic and its own ends”.4

As part of the course, the students worked on individual contributions about image, interface and affect that in the coming period will be published on Open! in batches. These (visual) essays reflect the students’ different artistic and critical practices and therefore are very diverse in terms of form, content and approach. Together however, and in relation to each other, they provide provocative insights and questions concerning the subject matter