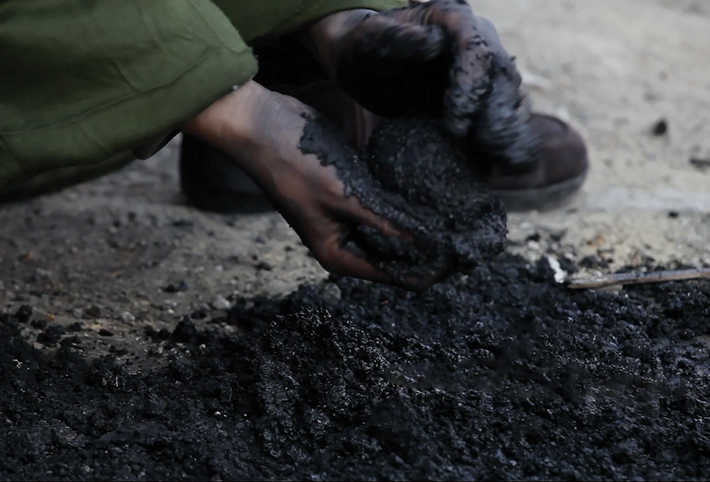 In Coalworks Koskentola reflects on the ubiquitous nature and generative potentials of the material (coal) as a daily necessity that keeps one alive (while simultaneously killing one), as currency of global capital games, as a cause of disasters, as a basic element of the human body, as a pollutant and as an intrinsic body in the universe.

The installations in the exhibition unfold from the shifting realities of daily life in migrant worker villages in Beijing and in a forgotten Buddhist temple in Chongqing. These marginalized spaces and conditions – not as opposite to those of the modern centres of our world but rather as the other side of the same coin – are opening up a critical inquiry into tensions between differentiation and equality, and conditions for mutuality.

In the 4-channel video installation Rituals to Mutations, imagery and sounds of coal invested landscapes in suburban Beijing, a ritual of incense-burning, the cleaning of the holy furnaces and burning rubbish in them coexist with actions of making balls out of the deposits of coal piles in a migrant worker village (to be used for heating and cooking). In the spatial installation Blackballing these coal balls suggest an imaginary game (that might be on or has taken place).

Koskentola’s installations address how aesthetic production might have the potential to unite terms and conditions that are traditionally seen as opposite. How might meaning propagate beyond its context of origin, across (cultural) geographies and into other realms? Her work explores dialogical and inclusive relationships between multiple co-actors, more ethical, material and spiritual connections between the human and its others. They challenge the viewer to consider his or her position.

Kristiina Koskentola is a visual artist, lecturer and a PhD candidate at Chelsea College, University of the Arts London. She currently divides her time between Amsterdam and Beijing. She is critically engaged with concepts of nomadic subjectivity and post-human condition. Her multisensory/mixed media installations are constellations of materials, media, stories and objects. Her praxis involves different levels of collaboration.

She has shown her work in various museums, institutions and galleries in Europe, Asia and the Middle East, including the Three Shadows Photography Art Centre as well as the Star Gallery in Beijing, the Zendai MoMA in Shanghai, the Skaftfell Centre of Visual Art in Iceland, Gallery Lumen Travo in Amsterdam as well as the Museum De Lakenhal/Scheltema in Leiden, Saari Manor in Finland and the 4th Baku Biennial of Conceptual Art in Azerbaijan. She has conducted talks, lectures, workshops and other academic work in different institutions and contexts, including the Dutch Art Institute, the Central Academy in Beijing, Academy of Fine Arts in Helsinki, University of the Arts London, the Himalayas Art Museum in Shanghai and the Dushanbe Art Ground in Tajikistan, General Public in Berlin and the Smart Project Space in Amsterdam. She has published several articles and her artist books have been presented at many art book fairs in Europe and the US.