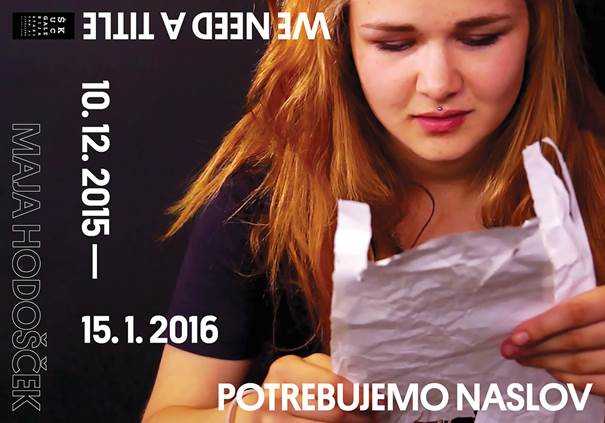 You are kindly invited to the opening of the show on Thursday, 10th December, at 8 pm at Škuc Gallery.

At a time when we are painfully aware of the effects of the atomisation of society, how to reverse this process is anything but self-evident. It is clear that the process is not reversible, that we cannot seize the lost power of the collective by looking to the past and simply reconstructing it. Jacques Rancière argues that human beings are tied together by a sensory fabric which defines the ways of a community, defining politics as the transformation of the sensory fabric of the community. The multitude of connections and disconnections “which define the way in which art weaves a community are made en vue de – ‘with a view to’, in the hope of - a people which is still missing”.

Maja Hodošček begins her project in Celje's Centre Grammar School, in school’s debate group, to be more precise, with an insight into the dialectics of connections and disconnections. For several months, pupils met to write a collective poem, which was a reaction to the general feeling of political powerlessness and based on the background of the history of the non-aligned movement. Things become complicated when planning for the future. First, the students must overcome their feeling of apathy and become aware that history cannot simply be brought back to life; they have to avoid the hazards of instant solutions. The students slowly progress, checking and promoting their ideas, trying to listen and consider others, and position their reflections on their own experience in a wider social context. They strive to respect the evolving community, and not ruin the principles that they believe can lift us from the rut in which we are stuck. And moreover, there is the need to create an artwork, to write a poem. The parallel processes of creation, of the creative school group and Maja Hodošček and her establishing the situation, are the core of her efforts to examine new modes of representation.

The dynamics establishing creative school groups is manifested as moments in the antagonistic creation of community. Footage of the students “looking for” an artwork as their meeting point by no means reflects a search for an “expression” that would represent a certain idea or state. Quite the contrary, the videos follow processes of dis-identification which are the condition of political subjectivity. The prerequisite for the students to act as political subjects is for them to stop identifying as students and to redirect their gaze elsewhere. The separation of their position in school and the new perspective into a different direction clearly demonstrates the new distribution of the sensory, new definitions of what a body can or cannot do. The political moment of the creative process of the Celje Grammar School debating society does not rely on the fact that the incentive for discussion was the non-aligned movement or the possibility of a third way, but on the fact that the creative processes, followed by Maja Hodošček in her work, bring about a certain change in the sensorium. This moment is highlighted by the videos Poem, Jam and Celebration, which present theatre and musical pieces by other creative groups of secondary school students. While these were inspired by the ‘political’ poem of the debating society, the videos are more concerned with works of art than with the process. Jam sessions, a capella improvisation and improvised theatre can no longer be linked to concrete political content, but are the result of a process whose moment of sensory redistribution is decidedly political. It is a political effect brought about by an aesthetic experience by disturbing the prescribed methods of how bodies should match their functions and positions.

We Need a Title is actually a contemplation of the alternatives available to art for its political engagement. It is symptomatic that we progress from engaged discussion of a school debating society to art works that do not produce activist rhetoric nor directly set coordinates for the functioning of a new community, but 'redistribute' elements of experience of their environment, school. They begin to regard themselves as something else and not (just) students, thereby finding new methods of collective enunciation. In this respect, Maja Hodošček is not writing a story about the embracing power of art but rather explores how we are “apart, yet together” in the reframing of our perceptions and affects. Therefore, the exhibition begins and ends with a work in progress, The Dreaming Society. The work is an open platform, an empty space, that the students must yet define with their own reflections, which is strangely explained by the following statement by Rancière: ”The art work is the people to come, and it is a monument to its expectation, a monument to its absence. The artistic ‘dissensual community’ has a double body: it is a combination of means for producing an effect out of itself: creating a new community between human beings, a new political people.”