Eva Olthof (DAI, 2011) concludes her Pasang Air residency with an exhibition, together with co-residents Chen Chia-Jen and Yudha Kusuma Putera at Cemeti Art House. Till November 30. 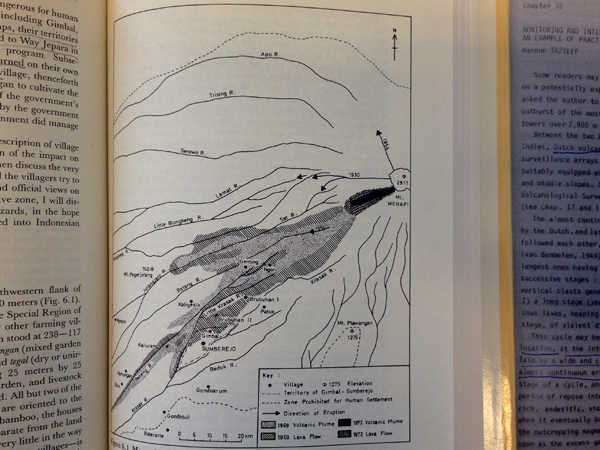 “He was the first climber to fall into the Mt. Merapi crater. He
fell into the crater when taking a selfie.”
Jakarta Post May 19, 2015

Eva Olthof started her working period at Pasang Air by investigating a story of a village on Mount Merapi whose residents were forced to
transmigrate in the 1960s. Soon after, many returned to their village which by then had been erased from the official map by the government. Stemming from this, Olthof became interested in images emerging from the symbols of authority connected to the volcanic mountain on a scientific, spiritual, and political level. A selection of the material gathered will be presented in a performative talk at the opening.

Eva Olthof (born in Nijmegen, 1983) is a visual artist based in Rotterdam. She is a graduate of the MFA program at the Dutch Art Institute, Arnhem. Her book Return to Rightful Owner, which departs from the political history of the American Memorial Library in Berlin was recently published by Onomatopee, a project space and publisher in Eindhoven. Also launched this year was the project www.archiveresonance.net - a growing archive containing memories of residents related to the collapse of the Historical City Archive in Cologne, Germany on 3.3.2009.