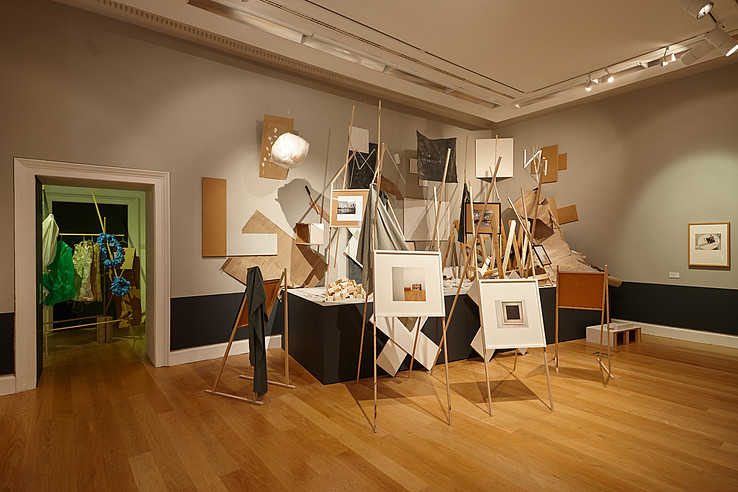 
Positions #2 brings together a series of new and older works developed by artists from all around the world. The artists in
The exhibition has the subject of different histories at its core. History is told from different places, different times and in different forms. This personal view is deployed in a variety of media: paintings, installations, performances and videos.

Anna Boghiguian is trained in visual art, music, economics and political science. She lives in Cairo, Egypt, but travels all around the world. Her nomadic lifestyle and the constant travels she makes can be seen as part of her work. She often takes her inspiration from the place where she temporarily works and translates this with an unique and personal approach into diary-like paintings and drawings. The images she creates can be read as snapshots or as thematically bundled descriptions of the state of our world.
Next to drawings and paintings, the exhibition will consist of a series of installations including The Salt Traders (2015) and a new installation bringing together her series of Scissors books and paintings.

In his video works, Chia-Wei Hsu (lives and works in Taipei, Taiwan) uses contemporary forms of the old tradition of storytelling to connect past and present. The practice Hsu is often connected to Taiwan and the history of geopolitics in this region, especially during the period of the Cold War. Through retelling forgotten histories, he shows how the dense and complex layers of culture and histories fundamentally transform the lives of people in the modern age.
The exhibition shows two videos - Ruins of the Intelligence Bureau (2015) and Huai-Mo Village (2012) - situated on the Thai-Burmese border, and Memorial Chamber of the Intelligence Bureau, a new architectural study of the ruins of the CIA office there.

Nástio Mosquito (lives and works in Belgium) is rooted in the broadcast industry, where he worked as director and cameraman. He uses performance, poetry, film, photography, music and spoken word to explore the contradictions of reality, playing with our perspective of this reality. In the experiences Mosquito creates, he likes to cross lines and confuse fixed distinctions and oppositions such as right and wrong, truth and lie, oppressor and oppressed, coloniser and colonised, male and female. In the exhibition two video’s will be on show: Ser Humano (2015) and I Am Naked (2005). Mosquito is seen as one of the most moving contemporary artists emerging at this time. In 2014 he was the winner of the International Future Generation Art Prize for artists under 35. This year his work was shown at the Venice Biennal and the Göteborg International Biennal for Contemporary Art.

Sarah Pierce (lives and works in Dublin, Ireland) works with performance, installations, video and archival material to research places and circumstances of interaction. This place is often the institution where she plays with the terms of making and mediating art, past artworks, forgotten objects and left-overs of exhibitions.
In a series of three installations she examines fixed and sedimented histories, referring to artistic figures of the 20th century: Eva Hesse (in Meaning of Greatness, 2006), Joseph Beuys (in Intelligence of the Measured Hand, 2011), and El Lissitzky (in Gag, 2015).

In 2014 the Van Abbemuseum started the exhibition series Positions, that sets a series of projects in dialogue with one another in the ten galleries of the museum's old building. Positions explores different tones of contemporary artistic voices.