Moscow Biennale of Contemporary Art September 22–October 1: How to Gather? Acting in a Center in a City in the Heart of the Island of Eurasia. With a.o. Suchan Kinoshita, Anton Vidokle, Saskia Sassen, Yanis Varoufakis and Rana Hamadeh (DAI, 2009). Curated by Defne Ayas, Bart De Baere and Nicolaus Schafhausen, 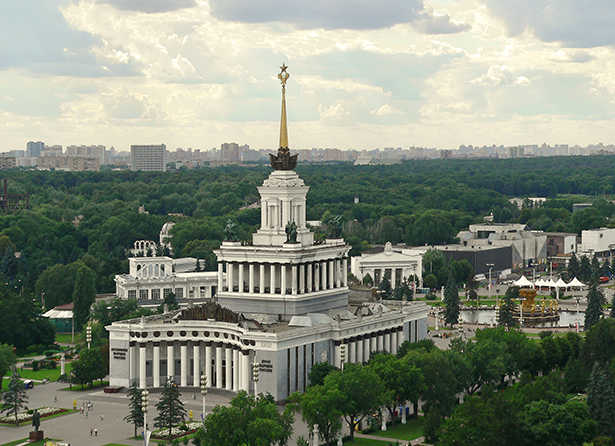 Under challenging circumstances, the Moscow Biennale of Contemporary Art opts for a radical format and changes its structure: the biennale will be condensed into ten days. Artistic, discursive and reflective moments will shape the space. Located in the Pavilion No.1 of VDNKh, it is here that the Moscow Biennale will evolve as a think tank in real time.

The title of the biennale is How to Gather? Acting in a Center in a City in the Heart of the Island of Eurasia. The central pavilion of VDNKh will become a site to embrace art and thinking in action, encompassing daily keynotes by thinkers, in situ work and performances by artists as well as workshops with Russian and international cultural figures. Artists such as Flaka Haliti, Rana Hamadeh, Fabrice Hyber, Alevtina Kakhidze, Suchan Kinoshita, Hanne Lippard, Taus Makhacheva, Amalia Ulman, Anton Vidokle, Peter Wächtler and Qiu Zhijie; writers such as Robert Menasse and Mian Mian; and system thinkers such as Ulrike Guérot, Kirill Rogov, Maya van Leemput, Saskia Sassen and Yanis Varoufakis will convene to find answers to questions such as: What are the fundamentals of a better life?, What are the grounds on which to formulate a constituency? Who are we (people, city, nation, empire, etc.)? What will Moscow be like in the future? All these questions primarily address an urgent dilemma: How can we live together?

After this ten-day gathering, different archival formats will follow up on the biennale, including a feature documentary by Singaporean film director Ho Tzu Nyen, a website with annotated documentation, a book, and a documentary exhibition from October 3 until November 1, 2015 at the site where the biennale took place, the central pavilion of VDNKh.

The 6th Moscow Biennale unfolds as a declaration of intent and an invitation to engage. The project, organized and supported by the Ministry of Culture of the Russian Federation, advances the development of new cultural spaces in Moscow, while the question mark in its title requires discussion and participation.

The curators are not proposing answers; instead they aim to create a situation that addresses the futures of humankind, art in its numerous forms and the Eurasian tradition of Russia, all in the setting of the VDNKh, Moscow’s All-Russia Exhibition Centre. A site symbolic of the USSR’s bringing together of traditions, the VDNKh embodies a history of Soviet nationhood as a village of pavilions and fountains. As the curators put it, “Art offers the possibility to gather, the possibility to cease being one, to become two, and perhaps more. It bears the potential to transcend the interpersonal sphere into a veritable soviet.” The potential implied is that of a return to communal, proto-Soviet roots, a search for rapprochement without loss of individuality.

In addition, the Moscow Biennale will include the auxiliary programs Special Guests, Special Projects and Parallel Program, presenting works by artists who define the face of Russian and Western art today. Projects by Special Guests will be presented at leading venues, including Louise Bourgeois at Garage Museum of Contemporary Art, Anish Kapoor at the Jewish Museum and Tolerance Center, and many others.

The biennale is organized by the Ministry of Culture of the Russian Federation, the Government of Moscow, VDNKh and the Moscow Biennale Foundation.

The commissioner of the biennale is Joseph Backstein.