STRANDED (2015): the photographic images in the “Stranded” series by Oliver Ressler point to something that might happen in the future as the collapse of the capitalist system as we know it continues. 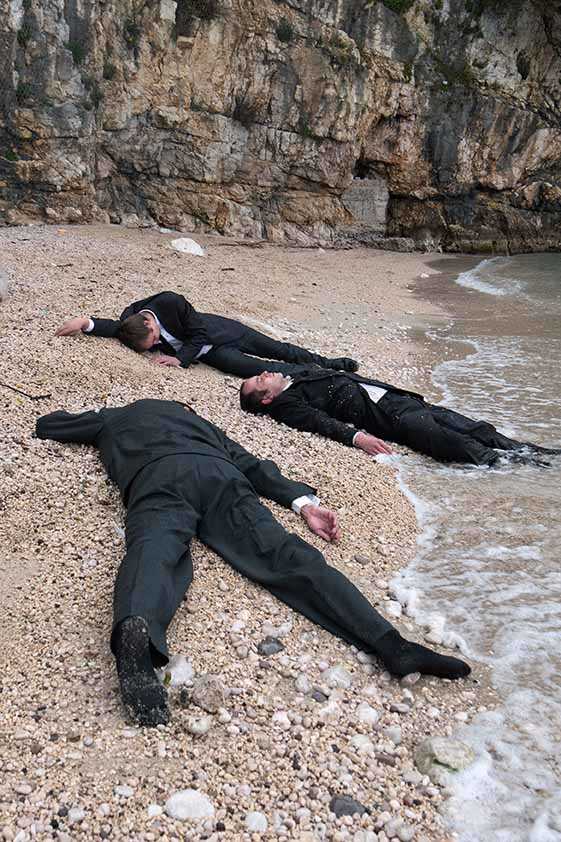 When thinking about dead bodies on the beach, these days most people think of refugees whose boats sank during the dangerous sea crossing to the European Union. The number of refugees drowned in the Mediterranean Sea in 2015 is the highest ever, reaching 2,500. The killing of these men and women can effectively be seen as a direct – and deliberate – act of EU policy, making the border between Northern Africa and Europe the deadliest in the world.

The photographic series “Stranded” shows men lying motionless on an empty beach. But unlike refugees these men wear business suits, the standardized clothing of politicians and managers. Their bodies are partly in the water, partly on the beach; they appear to be stranded.
These images could be seen as depicting those responsible for the policy of drowning refugees. The current European Union measures go beyond “refugee deterrence”. Today the EU makes use of the catastrophe it caused itself (through support for dictatorships, political intervention in uprisings, continuous wars on terror and economic strangulation of Africa and the Near East) to prepare renewed military intervention behind the back of the population.
Meanwhile, corporate executives have for decades used their global economic reach to enrich their shareholders at the expense of environmental, social and labor standards, causing entire regions to sink into poverty.

The photographic images in the “Stranded” series point to something that might happen in the future as the collapse of the capitalist system as we know it continues. The economic breakdown is already underway: as it spreads and deepens disasters, wars, and uprisings of all kinds will follow. “Stranded” imagines what might happen if the managers of today's economy – those for whom there is no alternative to corporate profit and human loss – were themselves sacked and thrown overboard by the people.

"Stranded" (2015), a series of photographs by Oliver Ressler, will be on display at Artwall Gallery in the framework of Fotograf Festival Prague from 1 October to 30 November 2015.
http://fotografestival.cz/2015/en/about-the-festival/?ref=cz