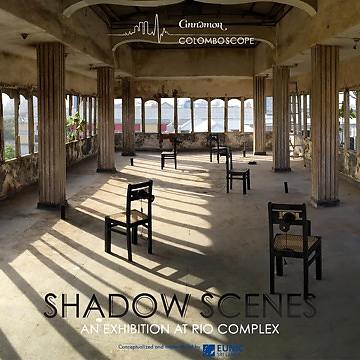 Shadow Scenes draws together over 41 visual arts practices from across Sri Lanka and internationally as part of the multidisciplinary arts festival Cinnamon Colomboscope 2015.
The curatorial approach commences from narratives and textures of historical experience that have characterised the Rio complex in Slave Island (Komnannya Veediya), an erstwhile hotel and cinema in the centre of Colombo's commercial district, since its inception in the mid-1960s. Rising from the shadows of the Black July riots of 1983, that culminated into decades of Civil War, the Rio has remained a ‘living ruin’ and a time capsule within the city’s consciousness. This exhibition presents works in a range of mediums across the 7-storey building charting an atmosphere foregrounding aspects of urbanization, colonial legacy, cultural identity and communal memory, while undertaking a cinematic reading of modernity as a resonant field of violence. Endemic politics across the North-South axis of this island and the world at large are actively re-considered within the framework of Shadow Scenes as an organic and temporary architecture of ideas and possibility.