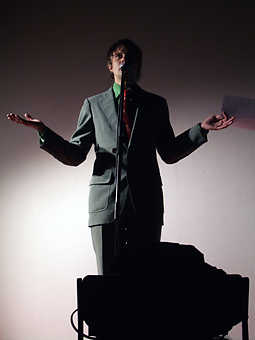 In the year 2004-2005 the German ‘psychoscifi’-composer and sound artist Felix Kubin, nicknamed the ‘Whirlwind Wizard of the Ivories’, was invited to tutor a workshop called Patentamt Futurismus.
The idea behind the Patentamt Futurismus involves basically a reconstruction and extention of early futuristic dreams and notions. The futurism concepts of technical development were ahead of their time. Therefore these concepts were so visionary that a lot of them could not be translated into the most appropriate form.
The development of science-based technologies were not so well advanced in those days. So why not establish a kind of patent office in which jammed, neglected and not yet realised inventions and concepts of Futurism might be taken up, executed and completed with the help of the modern technical means.

According to this provoking idea Kubin started in September 2004 with his workshop which the Dutch Art Institute organised in collaboration with the tART Foundation at Twente University.
The workshop was mandatory for the first year DAI-students, but also second year students could participate.
DAI-mentor John Heymans was responsible for the theoretical part of the workshop and lectured on the origins of Futurism, its most important artists and their work. He emphasised Luigi Russolo’s ideas and work.
In the end of the workshop which lasted for at least six days of working together, spread over half a school year, the participants came to a nice vaudeville of futuristic inventions. Beside this Kubin tutored each student individually. This happening took place on Saturday evening, the 20th of March 2005, in Ateliers ’93 in Hengelo.