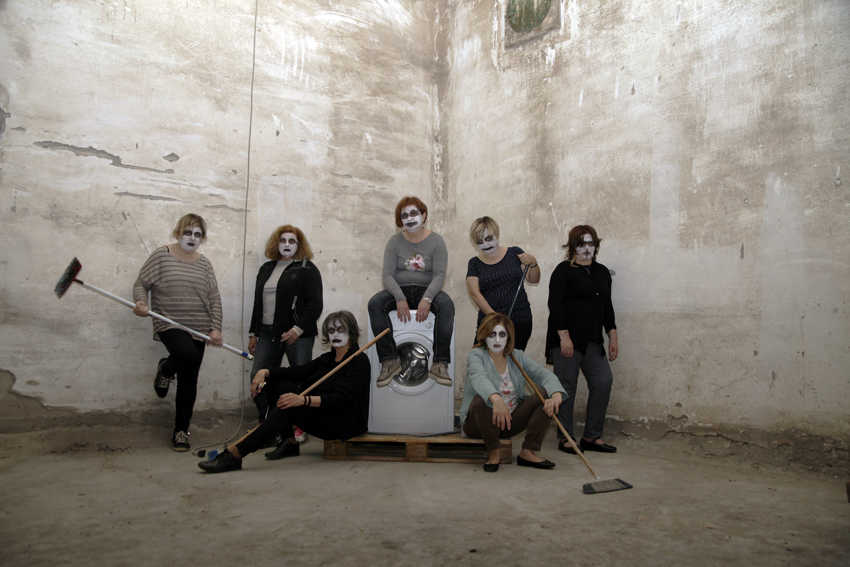 What we invite you to is an extra-ordinary space and time where various artistic visions compel us to watch where it is necessary to, where artists remind us - like Romeo Castellucci does in this edition’s poster - that “Watching is no longer an innocent act”.

Santarcangelo Festival Internazionale del Teatro in Piazza revolves around different lines of thought, opened up as research questions and investigated together with the artists through the co-production and presentation of art works, as well as through talks, a series of publication and a school program.

The festival focuses first and foremost on the issue of scandal and exception, gathering artists and projects that are challenging the border between reality and representation, shifting the political and the fictional dimension, and questioning the border of what art does and what art is actually allowed to do, either in its dedicated context and in the public realm. This line of research groups together many strong and original artistic proposals, without reducing them to a mere illustration of a concept but, on the contrary, aiming at raising new questions. Among the other works, Santarcangelo co-produces the Italian version of Some use of your broken clay pots by Christophe Meierhans (CH/BE) and of the performative installation Il Grande Rifiuto of the collective Ligna (DE), as well as a new work by Markus Öhrn (SE/D), specifically conceived for the festival and titled Azdora. The festival presents then a number of international works that revolve around these issues in different ways: the première of MDLSX by Motus (I), the Italian premières of Timeloss by Amir Reza Koohestani (IR), Our Secrets by Béla Pintér (HU), Breivik’s Statement and The Moscow Trials by Milo Rau (CH/D), besides Vita agli arresti di Aung San Suu Kyi by Teatro delle Albe (I) and Ce ne andiamo per non darvi altre preoccupazioni by Deflorian/Tagliarini (I).

Santarcangelo Festival also raises a question on the relationship between performing arts and history, exploring the concept of body as archive: it is not merely a form of knowledge organization, but also a possible embodiment of the relationship between the self and the world, the one and the many, the subject and the context, the performative and the political.
On this subject, the program presents among the others (untitled) (2000) by Tino Seghal (UK/D), now toured by Boris Charmatz and Frank Willens (F/D), 69 Positions by Mette Ingvartsen (DK/BE), Archive and the installation Capture Practice by Arkadi Zaides (IL).
The notion of the archive is crucial in the Mette Edvardsen (NO/BE)’s Time has fallen asleep in the afternoon sunshine, here presented in a new version with Italian actors also, while the relation between dance, choreography, knowledge production and political value is at the core of the project Piattaforma della Danza Balinese, co-curated with the Italian choreographers Michele Di Stefano, Fabrizio Favale and Cristina Rizzo, that will take place in the City Hall of Santarcangelo for ten days.

Furthermore, the Festival continues to explore the relationship between performing arts and the city through artistic interventions in public spaces and in some specific functional areas of city life, with the intent to create temporary zones of mutual exchange, to engage with contemporary artistic practices in common and popular contexts, and to involve an occasional and extemporary audience. Next to the program of theatre in the Piazza, the festival coproduces and presents a number of projects of contemporary Italian artists who work in the public space and question the public space, such as Antologia di S. by Muta Imago (I), Audioguide by Cristian Chironi (I), DET by Strasse (I), Incontri del terzo luogo: spazi di indecisione by Leonardo Delogu, Cinetico4.4 and Ballroaming by CollettivO CineticO (I) and the special intervention designed as a parade by Motus and Andreco (I). Moreover, the relation between art and public sphere is investigated with a joint effort with Vooruit arts center: based in Ghent (BE), Vooruit has established a program for “city residents” artists and is regularly supporting artistic research engaging with the urban context and its social and political complexities. The five international artists, currently involved with Vooruit, will gather in Santarcangelo where, besides presenting or discussing their work, they will have a residency. We invite you to discover, next to the already mentioned Christophe Meierhans (CH/BE), Simon Allemeersch (BE), Maria Lucia Cruz Correia (PT/BE), Michiel Vandevelde (BE) and Veridiana Zurita (BR/BE), and to join the Fondo Speculativo di Provvidenza (Mutual Speculative Fund), an artistic project by Christophe Meierhans and Luigi Coppola (I/BE).

Find out more on