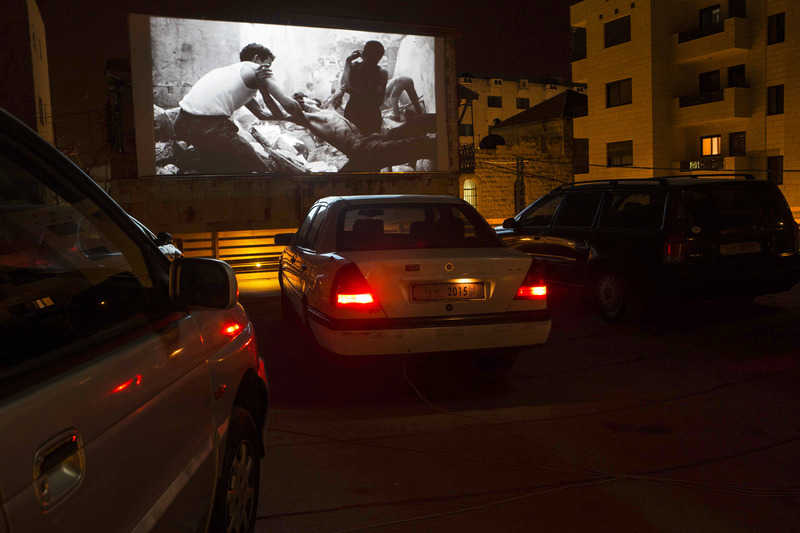 You are sitting in a car. Not your own car. You have no idea whose car this is. All you know is that it was lovingly placed on the rooftop of a historic building, here in downtown Ramallah. And that you’ve been watching a 1970s Egyptian Western. A French political musical. An experimental programme of artists’ film and video. The smell of popcorn fills the air, and the radio dial is a little buttery with your greasy fingerprints.

Cinema Sayyara! is a rooftop drive-in cinema by the artist Phil Collins, commissioned by the 5th Riwaq Biennale. It is the latest model of Collins’ Auto-Kino! which was rolled out in Berlin five years ago. The new film programme for Ramallah has been collectively selected by filmmakers, artists, artists’ collectives and curators whom Collins invited as guest programmers, as well as by residents of the Beit Saa neighborhood.

The project runs only for four weeks and offers a maximum of 21 seats per night. But if you live nearby, you can watch the programme from the street, your balcony or your favourite cafe by using a standard 98.9 FM frequency to tune into the soundtrack on the radio. The programme includes the following selections:

(The Battle of Algiers, Gillo Pontecorvo, 1967; I Am Cuba, Mikhail Kalatozov, 1964; Shadows of Forgotten Ancestors, Sergei Parajanov, 1964; The Umbrellas of Cherbourg, Jacques Demy, 1964)

Cinema Sayyara! thinks through existing structures in order to produce new forms of public display and new audiences. Its host venue, Beit Saa, is a 1910 edifice newly renovated by Riwaq. Eventually, Beit Saa is planned to join the ranks of the many “museums” in Palestine. But instead of a homage to the past, in the name of some faraway future, Cinema Sayyara! proposes a celebration of the here and now, ready to spark a sense of curiosity, enthusiasm and collective ownership within the neighbourhood and beyond.

The Riwaq Biennale is named after an institution, not a place. It was initiated in 2005 to expand upon Riwaq's approach aiming at the revitalisation of historic centres of 50 local towns and villages. In other words, this biennale comes with an agenda. It is invested in Riwaq's efforts to clarify the growing political and epistemic significance of architectural heritage in Palestine. With its concrete political outlook and its durational, discursive approach, Riwaq has always challenged what a biennale can be. This time, the 5th Riwaq Biennale is spanning an entire two years, beginning in June 2014 and ending in May 2016.