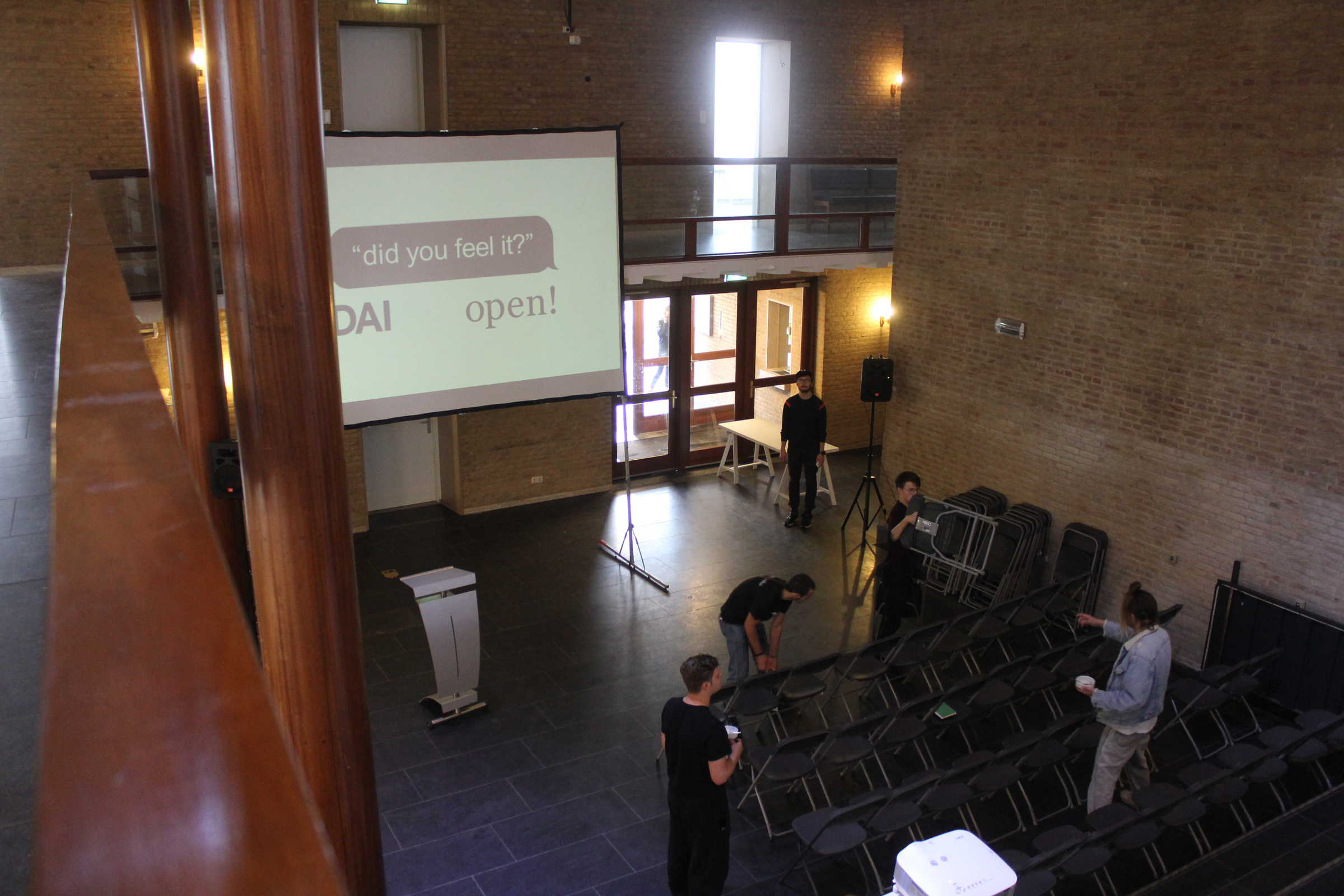 This semester’s last get together of Open! Co-Op Academy, we start with face-to-face meetings to discuss the last drafts of the individual (image) essay assignments. Our guest will be translator and philosopher Brian Massumi, who has face to face meetings with certain students on Thursday morning. Thursday night at 20:00, Brian Massumi will do a public lecture at Showroom. Friday June 19, there will be a final group meeting, in which we will go into the organization and technicalities of our symposium on digital interfaces and their affect did you feel it?. In the afternoon we will have a closed seminar with Brian Massumi in which we will immerse ourselves into key concepts and conceptual stumbling blocks related to affect. Texts to read: "Keywords for Affect", from Brian Massumi, The Power at the End of the Economy (Duke University Press, 2015) and "In lieu of a conclusion”, from Brian Massumi, Politics of Affect (London: Polity Press 2015)

On May 21 tutors Florian Göttke and Jorinde Seijdel will have face-to-face meetings with small groups of students, to discuss the completion of the (image) essay assignments. As a guest, designer Niels Schrader (designer of the new Open! website) will meet up with these students who are focusing on an visual publication. He will give his feedback and discuss technical and design possibilities with them. On Friday May 22, we will again have an extensive group meeting, in which we will further elaborate the form and content of our conference about the affect and the digital interface. We will decide about the keynote speakers and the questions we would like to address to them. In the afternoon Willem van Weelden will come over for a seminar about Interfacing Realities: from Effect to Affect, On Alexander Galloway's Allegories of Control. Preparatory reading: from Alexander Galloway’s The Interface Effect: Introduction : the computer as a mode of mediation and the chapter The unworkable interface.

Today we will first have an extensive group meeting, in which we will further discuss and elaborate the form and content of our conference in progress on the digital and the affect. For the afternoon seminar, art theoretician Sven Lütticken will come over to expand on the "production of shine" within the culture industry. Preparatory literature: S. Lütticken, Shine and Schein, e-flux journal, #61, 2015 (http://www.e-flux.com/journal/shine-and-schein/ )

We will again start this month’s Open! Co-Op Academy with a series of small group meetings in which each student presents and discusses an update of his proposal for an image essay to tutors Florian Göttke and Jorinde Seijdel and to two-three fellow students. Simultaneously, face-to-face meetings will take place with mediatheorist Eric Kluitenberg. On Friday we will continue with presentations to the entire group of each sub team’s progress for developing a part of the conference in the making Six Characters in Search for an Author (work title). In the afternoon we will all participate in a seminar of this month’s guest Eric Kluitenberg, who will go into his current reserach on ‘affect space’. Literature: E. Kluitenberg, Feelings in the Air. Notes on Political Formation in Hybrid Space (2013) and N. Thrift, Intensities of Feeling - Toward a Spatial Theory of Affect (2004).

We will start this month’s Open! Co-Op Academy with a series of small group meetings in which each student presents and discusses his first proposal for an image essay to tutors Florian Göttke and Jorinde Seijdel and to two-three fellow students. Simultaneously, face-to-face meetings will take place with Metahaven’s Daniel van der Velden. On Friday we will have presentations to the entire group of each team’s concept for a ‘public discursive event’, in which a conference model and a central theme (within the overarching subject matter of ‘affective images’) with some key questions are being proposed, motivated and clarified. In the afternoon we will all participate in a seminar of this month’s guest Metahaven. Reading: Gilles Deleuze and Felix Guattari. “Percept, Affect, and Concept.” In: What is Philosophy? New York: Columbia UP, 1996. 164-199; The Aesthetics of Affect, by Simon O’Sullivan. (http://simonosullivan.net)

On Thursday we will start with discussing and planning more into depth the assignments of composing an image essay and curating a discursive public event on the working of affective images and public images. As guest for these days we will welcome and meet with Foundland, a design, research and art practice, based between Cairo and Amsterdam. The collective's work draws on graphic design, art and writing research. On Friday we will first discuss philosopher Brian Massumi's seminal essay The Autonomy of Affect and then go into a workshop/seminar with Foundland.

This first session will include an introduction to the course with Jorinde Seijdel & Florian Göttke. We will try to get a clear idea about what is meant within the context of the course with the notion of affect and the notion of public image. We will discuss Open! as an overarching framework and review two introductory texts: one about the affect by The Chigaco School of Media Theory and the other about the public image by Richard Grusin (Publicity, Pornography of Everyday Media Practice? On the Abu Ghraib Photographs.) In relation to the first assignment of this course (Create an image essay, text essay or text-image essay), we will closely look at Florian Göttke's contribution to the Open! website, A Protester in Homs, Syria. Furthermore we will look more closely at the reading list and lay out the year ahead as much as possible.