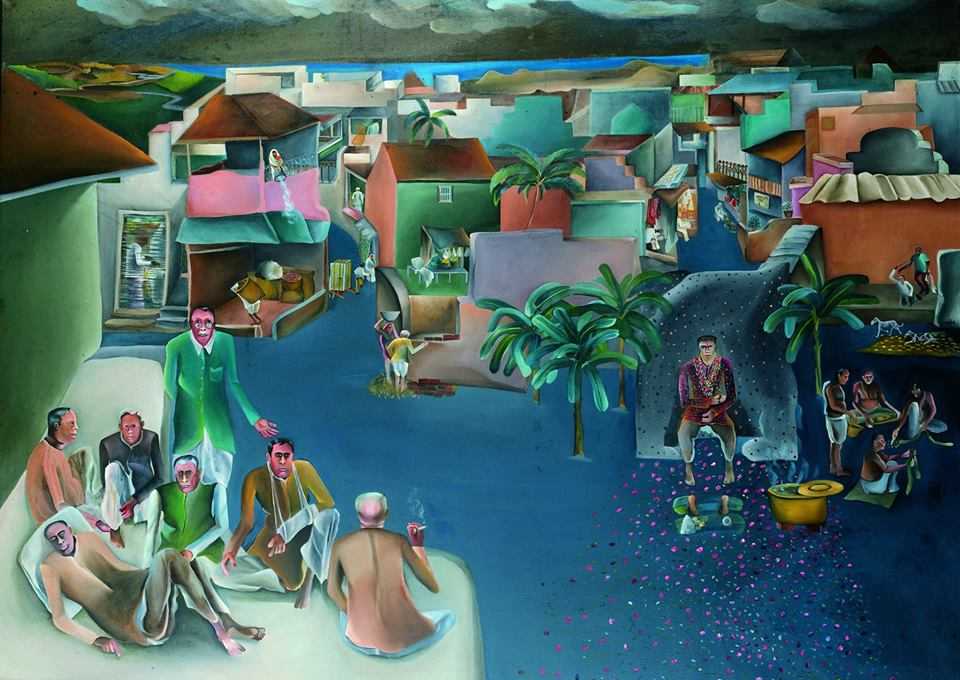 Para Site is pleased to present Eros, an inquiry into the circulation of knowledge and the currency of such circulation as seen through historical and contemporary examples, including Chinese ceramics, collaborative practices between artists of Bombay and Hong Kong, and pirate archives such as wikileaks/Julian Assange, Megaupload with Kim Dotcom, and Anonymous with Christopher Doyon.

This present day endeavour is based on discussions of the shared histories between Hong Kong and Bombay, through historical precedents such as the maritime Silk Route, which enabled the circulation of commodities such as silk, opium, porcelain and tea, to the present day flow of pirated DVDs, diamonds and rip-off second-tier electronic equipment. While this is perhaps running afoul of many contemporary copyright laws, the circulation of goods and knowledge can be seen as inevitable and necessary to furthering the development of these material commodities, and also to the building up of pirate archives. These have enriched areas of contested truths and struggles in the present day. Some of the materials used for the exhibition were collected by Sumesh Sharma from waste pits in Sheung Wan and Central, where shop displays and restaurant interiors were discarded in an ever changing consumer based visual culture, well representing the supposed economic freedom of Hong Kong.

Eros borrows further from historical precedents by intervening within the permanent ceramic display in the Fung Ping Shan Building [DB1] at the University of Hong Kong Museum. Donated by the eponymous Fung (1860–1931), who was a noted businessman, educator, philanthropist, and a co-founder of Bank of East Asia, the building formerly served as a library and is now host to a chronological display of ceramics ranging from the Han to Qing dynasties, and a small set of export wares that purportedly belonged to the Woolworth heiress Barbara Hutton (1912–1979).

Trevor Yeung seeks to recreate Yogesh Barve's lines that demarcate Equality/ Inequality of the dichotomies of a constitution that guarantees us fundamental rights, but rights that are then held in contempt by old colonial penal codes. He then erases the same painted and drawn lines with the use of a sandblaster, and exposes the raw texture lying beneath. Drawing attention to the worn etchings, watermarks and moulding done to the materials, he seeks to create a moment of observation and examination of the history and past wrought upon improvised canvases of plywood.

Working off the photogaphs of Amol Patil who documents the collectives of scavengers from the streets of Bombay, Angela Su draws attention to the contested area near the MacIntosh Forts on the border of Shenzhen and Hong Kong through the appropriation of Patil's performative gestures and sites in Make up and the Land (2013). Unconsciously, Su's posters inhabit the very material, scavenged from the streets, as portrayed in Amol Patil's works.

In another segment of this exhibition, the works of Rupali Patil and Ko Sin Tung take on an intuitional[DB2] grasp of the landscape reacting to the circulation of used materials and information to create new nodes of instigation. Reusing a tile found earlier in Sheung Wan, Ko covers the tile with a different motif arising out of the iconography of patterns found on tiles and porcelain vessels, thus creating an archaeological narrative that transcends the chronology of material culture. In contrast, Rupali Patil's drawings look to the alienation of structures that assert their dominance against policies of urban planning. Usually inhabited by migrants and migrant workers, these structures, like caged homes and dormitories, are often pushed to the peripheries of urban consciousness and enhance the displacement felt by many of these communities. Patil's drawings, mounted on a cutting board, look at the alienation and the construct of freedom.

Along similar lines of inquiry, we look back on Copyright This! by Sanjay Bhangar (later a member of CAMP), a high-energy romp through Bangalore that focuses on the local context of copying and intellectual property in this "IT City". Created a decade ago, the work was made for and broadcasted through cable TV to about 3500 people, primarily from Deccani–Urdu speaking homes in Shivaji Nagar, Bangalore, as part of Shaina Anand/Chitrakarhana's project, World Information City TV (WICity TV), 2004.

Eros will also be screening another video from the WICity TV project, which was part of the collaboration with Suroor TV (Pleasure TV), a local Deccani television channel run from the homes of Kashif and Safina, a brother-sister producer duo. Generously hosting parts of WICityTV and other programmes, Suroor TV was able to navigate a political, linguistic and operational landscape, even as competition from set-top boxes and changing laws were closing down such spaces. Together with accompanying print material, these works reflect on early passions, commitments and friendships that are integral to the group itself and served as a backdrop to future and current collaborations, such as http://Pad.ma and http://Indiancine.ma, online footage and film archives respectively.

Lastly, we return to the site of the former library and present-day museum through Shadow Libraries, a text by Lawrence Liang that envisions the myths that are perpetuated through the pedagogical impulses, and look at the heart, the base impulse and interventionist[DB3] strategy for our exhibition Eros. (Text: Qinyi Lim, curator)

Clark House Initiative, established in 2010 by Zasha Colah and Sumesh Sharma, is a curatorial collaborative focused on ideas of freedom and equality. Through re-examining history and studying its representation and visibility, insights are gleaned into the possibilities of alternative economies and freedom. Clark House Initiative intends to actively recall political and artistic figures into contemporaneity, and to question the recent rise of fascism in India based on exaggerated rumors of economic prosperity and nationalist pride.