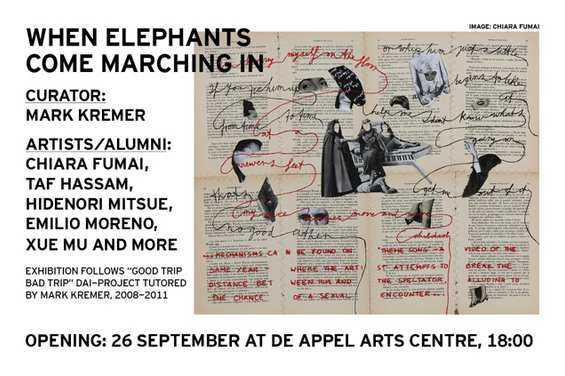 The tumultuous 1960s have left two trails in art- and cultural history: Psychedelia and Conceptualism. Today Psychedelia – art and other expressions that arose out of the impulse to expand human consciousness – is associated with drug use, the sub- or counterculture, and experimental music, while Conceptualism – visual art in which the central element is the idea – is almost synonymous with high art. In the 1960s the two artistic movements were close to one another, but they are now often seen as opposites. The desire for the orgiastic momentum would seem to be difficult to unite with a striving for the pure idea. But are those perceptions correct? And how do artists today deal with this double legacy of the 1960s, consciously or intuitively?

The exhibition When Elephants Come Marching In: Echoes from the Sixties in Today's Art by guest curator Mark Kremer investigates the ongoing influence that these two art complexes still have in contemporary Western art. Artists today activate a turbulent inheritance; and in their efforts Psychedelia and Conceptualism are once again united. The show brings together works from 14 artists, ten of which have made work especially for this exhibition. The proverbial core of the show consists of presenting a small work-ensemble of the late Walter De Maria, someone who stands for a legendary generation of artists who put their mark on the 1960s.

More about the exhibition at De Appel

More about the project Good Trip Bad Trip at the DAI :