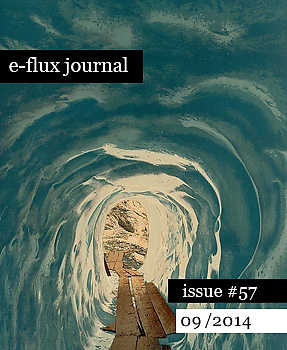 Francis Fukuyama, and even his mentor Alexandre Kojève before him, warned of boredom, stasis, and homogeneity being characteristics of the "universal homogenous state" that would mark the end of history. As Fukuyama put it: in the post-historical period there will be neither art nor philosophy, just the perpetual caretaking of the museum of human history. And indeed, the phase of contemporary art has also been characterized in discussions over recent years as a reformatting of time into a perpetual present. The contemporary is the now that never ends, the art that circles itself at the tail end of history looking back on defunct ideologies, archiving and polishing them for a future that never arrives.

Something else also happened around the time of Fukuyama's proclamation. Because another side of the end of history might have to do not only with the collapse of a certain notion of humanist progress but also with a whole other shift in temporality that made it doubly unsustainable. And it also took its structure from the liberal tradition as well as the US military. It has to do with radical advances in communication technologies that we also call the internet. In fact, Fukuyama's mistake may have been in seeing a global Pax Americana in traditional geopolitical terms, when in fact the end of history is then not only the end of a certain era of political thought but also the beginning of a new phase of extreme spatial and temporal compression. It is marked by a perpetual sense of dislocation that alters the way we experience places and events, and by extension the way time and causality function—certainly not in terms of any accumulative continuity that would make historicization possible. Instead, everything happens as if simultaneously, even contemporaneously. We thought Fukuyama was talking about ideology, but it was also about how we stabilize an idea of one thing following another in the most basic sense.

So maybe the function of contemporary art is not so much to drift aimlessly in the melancholic haze-time after the end of ideological progress and humanist time. Instead, why don't we look at a renewed function of the contemporary arts as actually developing methods of training the body to withstand the stresses of temporal dislocation, of what is in essence time travel? After all, if the contemporary conditions of flexible labor and self-managed time are so truly unbearable, then forget about jet lag and try to think about astronauts who need to train their bodies to withstand the pressures of entering and exiting the atmosphere. Slowly and painfully, we may be learning how to disintegrate and reconstitute ourselves over and over again as we go to visit our parents in the motherland, take the kids to school, attend stupid conferences and openings, show up at work, get drunk, write a novel, all at the same time and with all limbs intact. It is not only about the violence of an endless economic now or the stresses of sitting in place imagining myriad scenarios in order to speculate on property values, but also about learning how not to fall apart while moving at warp speed. If we can get it right, we will be untouchable to fascists. We will move so fast they won't even be able to see us.

The only catch is that speed might already have become an outdated notion. We thought we had to be moving fast in order to cover these long distances, but it might just as well be that the world is shrinking, and we are not in fact moving as fast or as far as we had thought. And we are not so much at risk of fragmenting into a cosmopolitan mess, but of actually being compacted. If space and time are actually compressing, then something totally outside of our control would actually be consolidating all of our fragmentary contradictions on its own until we are completely resolved as a single thing. And this resolved state of being might use the strong name of a nation, tribe, sect, religion, or race to crowdsource votes or as a talisman to ward off further invasions trying to beam in over YouTube or Skype. Some of us may be convinced by these names, because they are very real. And some of us may go to war over these names. Even while knowing that they are not at all what they claim to be.

The September issue of e-flux journal is the second part of a double issue on the end of End of History and the reemergence of origin myths. From Hungary to Russia to Egypt to Syria-Iraq to India to France to the UK to Norway and elsewhere in Scandinavia, to Japan, China, South Africa, and beyond, many of these emerging movements tend to look on the surface like the old fascism, but something is very different this time around, and it marks a profound change in the nature of representation in general, whether in a political or artistic sense. 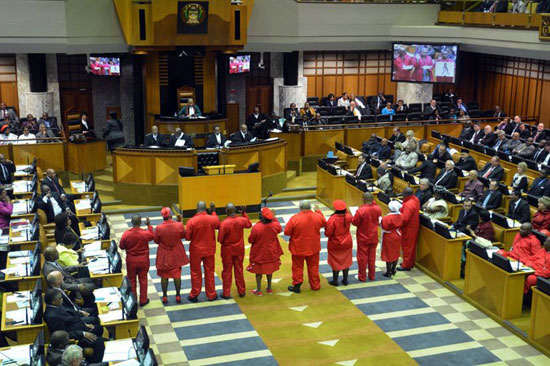 Image: Members of the EFF (Economic Freedom Fighters) is sworn into parliament wearing their miner's overalls and maid's uniforms, 2014.

Please find Eduardo's text ('Red Barets and Economic Accomplices' focusing around the current political situation in South Africa.which even uses a bit of a segue relating to the Dutch PVV) here: http://www.e-flux.com/journal/red-berets-and-economic-accomplices/