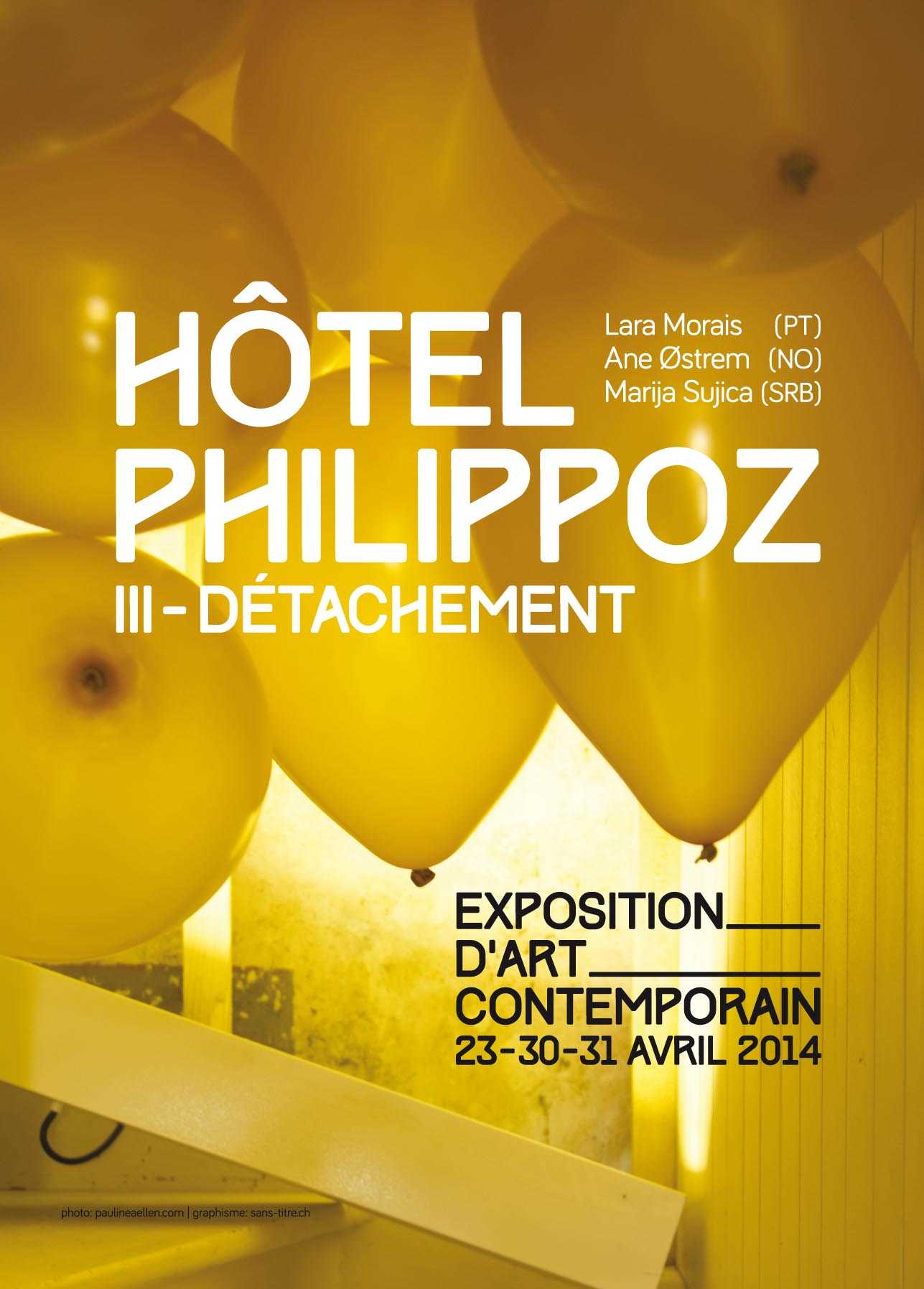 Hôtel Philippoz' two first residencies – in August 2013 and April 2014 – focused on the ideas of trace and transmission. For its third and last residency, Hôtel Philippoz will host Lara Morais, Ane Østrem and Marija Šujica for two weeks, for them to engage with the notion of detachment: Lara Morais' approach on space and the way we experience it as an emotionally and historically loaded place; Ane Østrem's poetic works on the idea of absence and (mis)communication; and Marija Šujica's research on absence and presence, the history and rituals around death, shall provide us with rich and engaging works to think the idea of distance through. Just before the space gains its new and final shape (at least for a few years), you are welcome to discover the result of the artists' research during two public events, on August 30 and 31.

As an introduction, Rita Bonvin will lead a "Death café" on August 23.
More info here below and on www.hotelphilippoz.ch

LARA MORAIS
In her artistic practice, Lara Morais generally starts by inhabiting and experiencing a space, translating and transposing its history into another space, another narrative, which is later individually experienced by the observer in video-performances, performances or installations, creating as many versions and extensions of her work. Lara is particularly interested in questioning the way one's body relates with and within a space that can sometimes be illusory, that is always produced and translated by movement.
In Hôtel Philippoz, Lara plans to perform a story, a story about her experience inside her own apartment, translating that experience to the observer. Transferring a space she knows by heart, transposing it into a whole new space, a space that also has a strong history, a different culture, another life.
* Lara Morais (PT) was born and works in Lisbon. She graduated in painting in 2000 at Escola de Tecnologias Artisticas de Coimbra (ARCA-ETAC); in the same year started a Graphic Design course at the ETIC in Lisbon. Between 2003 and 2007, she joined the Independent Studies program at Maumaus - School of Visual Arts. In 2008, she studied at the Malmö Art academy and later completed a Master degree at the Dutch Art Institute in Arnhem, Netherlands. She already exhibited her work and performed in Vienna, Lisbon, Nottingham, Malmö, Tehran, Dakar, Madrid, Bilbao and Arnhem.

MARIJA SUJICA
Marija Šujica works with the notion of the body as a living medium that is in a constant flux of perceiving, projecting or remembering images. Her work is a conglomerate of subjective and personal questioning on the juxtaposition of social empathy and legal or social rules. Marija's current focus is on possibility and impossibility of mourning, which is described by Derrida as either away of interiorizing the image of the other, or refusing to take the other within us. By means of printed matter, performance and sometimes installation of objects, Marija gathers a participating audience and addresses them with the following question: how could an audience be described as a fictional character?
* Marija Šujica (SRB) lives and works in Amsterdam. She completed a MFA programme at the Dutch Art Institute in 2012, when she published the artist book 'Most Of The Time Not At All Always' (2012). Her work has been shown at -among others - the Hub Gallery Belgrade, Print Room Rotterdam, Extrapool Nijmegen, Kunstvlaai Amsterdam, The New York Art Book Fair and Raw Material Dakar.

RITA BONVIN
* Rita Bonvin-Dussex (CH), first trained as a photographer, works now as a nurse in palliative care.
As an introduction, she will lead a "Death café": imagined by Swiss ethnographer Bernard Crettaz, death cafés are meant to create locally temporary free spaces where anyone can share their experiences and concerns about death and the rites connected to it.

Hôtel Philippoz is an art events and residency programme located in an old flat undergoing complete renovation. In the course of a year, ten artists will be invited to stay over at Hôtel Philippoz and engage a dialogue with the place. They will work in the flat, adding a new history to the place, in layers.
Hôtel Philippoz is intended as a space to research the notion of trace and the problematics linked to the existence, preservation and transmission of memory.

With the kind support of Canton Valais and Loterie romande