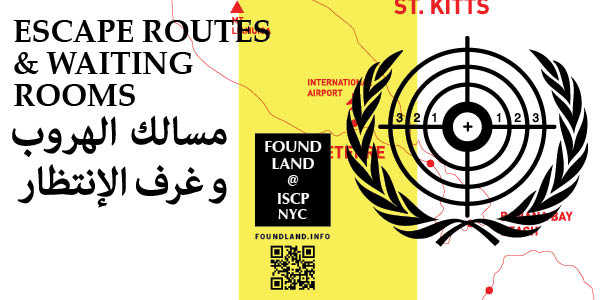 The International Studio & Curatorial Program (ISCP) is pleased to announce Escape Routes and Waiting Rooms, the first exhibition by Foundland in the United States. Foundland, initiated in 2009, is a collective of two artists: Ghalia Elsrakbi (Syria) and Lauren Alexander (South Africa)( DAI, 2011). Along with artist Taysir Batniji, Foundland are the recipients of the first ISCP residency sponsored by Edge of Arabia in partnership with Art Jameel for artists from the Middle East.

In Escape Routes and Waiting Rooms, Foundland investigates personal stories of mobility and migration around Syria, a place where freedom of movement is strictly restricted due to its ongoing civil war. In two newly created installations, a Syrian family's dinner table is restaged to depict a schematic map of a family where most of the members have migrated from the country over time. The work reveals intimate family moments and history set in a ravaged country where millions of people are displaced.

Also included in this exhibition is a tent and video installation modeled on actual tents used in Za'tari camp in Jordan, one of the largest Syrian refugee camps in the world. Originally serving as a temporary living space, a refugee tent can be considered a "waiting room" for an unknown future. Foundland visualizes the potentiality of the tent as a symbolic transformative structure, which initially facilitates temporary, emergency landscapes, but could become the starting point for new communities over time.

This exhibition is organized by Kari Conte with Shinnie Kim. A catalog will be published to accompany the exhibition with a commissioned text by Nat Muller, an independent curator and critic specializing in media art and contemporary art in and from the Middle East.

The Edge of Arabia residency, in partnership with Art Jameel and ISCP is a critical component of Edge of Arabia's multi-year tour across the United States.