Edge Of Arabia, in partnership with Art Jameel and the ISCP awards its first US residency to Taysir Batniji and the artist collective FOUNDLAND = Ghalia Elsrakbi and Lauren Alexander (DAI, 2011). The artists will participate in a 3-month residency at the acclaimed ISCP / International Studio & Curatorial Program 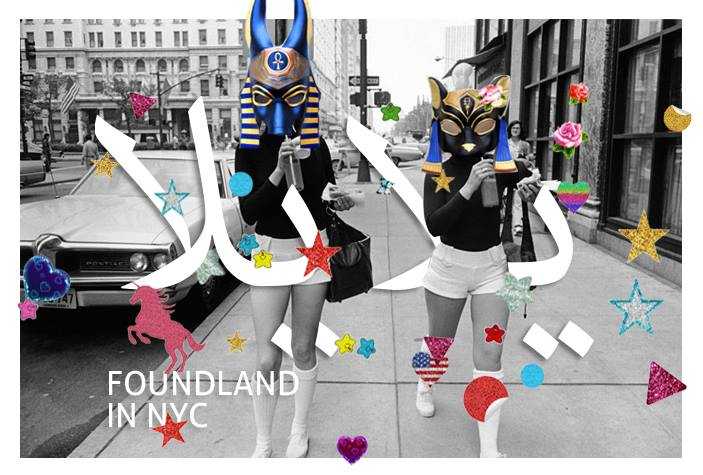 New York (May 15, 2014) – Edge of Arabia, in partnership with Art Jameel and the International Studio & Curatorial Program (ISCP), and with additional support from the Zedan Group, has awarded its first artist residency in the United States to Taysir Batniji, a Palestinian artist, and Foundland, an artist collective from Syria and South Africa. A central component of Edge of Arabia's multi-year US Tour, the concurrent 3-month long residencies will allow Batniji and Foundland, comprised of Lauren Alexander and Ghalai Elsrakbi, to take part in the ISCP's acclaimed studio program in Brooklyn from July through September 2014.

The programme aims to support the artists' practices and to immerse them in the cultural landscape of New York. Nearly 200 applications were submitted by artists living and working across the Middle East, including Lebanon, Tunisia, Yemen, Egypt, Saudi Arabia, Morocco, Syria, Oman, United Arab Emirates, Sudan, Iran and Algeria. As a continuation of Edge of Arabia's on-going, peripatetic US Tour, the residency program reinforces established goals of connecting Middle Eastern artists with new audiences, and exploring interconnected stories that link ideas and people across physical and psychological borders. The US Tour, originated in partnership with Art Jameel, launched in March 2014 at the FotoFest Biennial in Houston and is traveling through Boston, New York, and Washington D.C. before making the cross-country road trip to the west coast. "This is an exciting moment for artists from the broader Middle East to enter into dialogue with artists in the US and have the opportunity to expand their practice here," explains Sarah Al-Faour, head of strategy and partnerships for Edge of Arabia. "The strength of applications reflects the depth and diversity of artists living in the region and we are delighted to launch the program with two such dynamic participants.

Founded by artists in 2003, Edge of Arabia has made history through pioneering shows across Europe and the Middle East, and it has been paramount to us and our lead partner, Art Jameel, that artists are at the core of this US Tour." Marking Taysir Batniji's first trip to the US, the residency will open doors to introduce his practice to New York audiences and is self-designed by the artist to center around photography and video production. With a clear set of critical parameters, Foundland will present new installations, participatory talks and film screenings, as part of their ongoing investigation of subjective mapping and storytelling. The ISCP's flexible, high calibre program allows the artists to undertake independent projects and work alongside curators during their residency, as well as join the ISCP's esteemed com- munity of international artists.

ABOUT THE ARTISTS Taysir Batniji (b. 1966, Gaza, Palestine) is an interdisciplinary visual artist who divides his time between France and Palestine. His practice incorporates drawing, painting, installation and performance, often closely related to his heritage – however since 2001 the artist has focused primarily on photography and video. Batniji has participated in numerous international exhibitions, including Untitled, 12th Istanbul Biennial (2011); Future of a Promise, a collateral event of the 54th Venice Biennale (2011); Seeing is Believing, KW Institute for Contemporary Art, Berlin (2011); and RAY 2012 Foto- grafieprojekte Frankfurt/Rhein-Main (2012). Taysir Batniji is represented by Galerie Sfeir-Semler, Hamburg & Beirut, and by Galerie Eric Dupont, Paris.

Foundland (established 2009) is a collective whose work draws on graphic design, art, writing and research. Comprised of the artists Ghalia Elsrakbi and Lauren Alexander, Foundland focuses on a critical analysis of topics related to political and locational branding through visual and written forms. Since 2011 it has centered more on the Middle East, with special interest in Elsrakbi's homeland, Syria. Foundland has developed an expanding database of visuals and information, gathered from observations of media, activist groups and trends of political expression across social media. Drawing unexpected relations and connections, they create alternative narratives to media reporting through innovative image making and personal interpretation. Foundland has presented in group exhibitions including the Kadist Foundation, Paris (2012); Impakt Festival, Utrecht (2011, 2012); BAK, Utrecht (2012); and the Damascus Visual Arts Festival, Istanbul (2013) and has presented lectures at Studium Generale ArtEZ, Arnhem; de Appel for Sandberg Institute, Amsterdam; Royal Academy of Arts, The Hague; Rietveld Academie, Amsterdam; and the Athens Biennial 2013. In 2013 they completed an artist residency at the Townhouse Gallery in Cairo.

GHALIA ELSRAKBI (b. 1978, Damascus, Syria) completed a BA Graphic Design at Artez Hogeschool voor de Kunst, Arnhem, followed by a Masters in Design at the Sandberg Institute, Amsterdam. In 2009, she followed a research post-graduate at Jan van Eyck Academy in Maastricht. Since 2011 she has been involved with various activist groups promoting creative dissidence in Syria and since 2013 she has been based in Cairo, Egypt.

LAUREN ALEXANDER (b. 1983, Cape Town, South Africa) completed a BA Graphic Design at the University of Stellenbosch in South Africa, followed by a Masters in Design at the Sandberg Institute and an MFA at the Dutch Art Institute, Arnhem. She is member of the tutoring staff at the Royal Academy of Arts in the Hague.

Visit www.edgeofarabia.com for further information on Edge of Arabia's US Tour. Connect with Edge of Arabia on Facebook | Twitter | Instagram for all the latest news, updates, photos and more. Join the conversation by mentioning @EdgeOfArabia and using the #EOAUSA hashtag.

About:  Edge of Arabia Edge of Arabia is an independent non-profit arts and education initiative dedicated to connecting Middle Eastern artists with international audiences. To date, Edge Of Arabia has welcomed 250,000 visitors to its exhibitions, distributed over 50,000 books & catalogues worldwide, impacted over 300 schools & universities through its award winning education program and reached a wider audience of over 10,000,000 through a dedicated communications campaign. International exhibitions include: Rhizoma, 55th Venice Biennale (2013); #COMETOGETHER, East London (2012); We Need to Talk, Jeddah (2012); The Future of a Promise, 54th Venice Biennale (2011); Terminal, Dubai (2011); Transition, Istanbul: European Capital of Culture (2010); Grey Borders/Grey Frontiers, Berlin (2010); Edge of Arabia, Riaydh (2010); Edge of Arabia, 53rd Venice Biennale (2009); and Edge of Arabia, University of London (2008). About Art Jameel Art Jameel – Abdul Latif Jameel Community Initiative's (ALJCI) arts and culture initiative – aims to foster and promote a thriving arts scene within the Middle East, North Africa and Turkey (MENAT) region and to support the development of crea- tive enterprises. In partnership with art organizations worldwide, Art Jameel develops cultural exchange programs to encourage networking and knowledge sharing. Art Jameel is the founding partner of Edge of Arabia, The Crossway Foundation, Arabian Wings, Jeddah Art Week and The Archive. In partnership with the Victoria & Albert Museum in London it provides the biannual Jameel Prize for contemporary art inspired by Islamic traditions. Additional projects include: Jeddah Sculptures Museum, a public park established in collaboration with Jeddah Municipality; the Art Jameel Photography Award; and the Art Jameel Art Olympics in collaboration with the Ministry of Education in Saudi Arabia. ALJCI was established in 2003 to promote positive social change through the estab- lishment of long-term partnerships with international institutions, and the creation of initiatives in the fields of Job Creation, Global Poverty Alleviation, Arts and Culture, Education and Training, Health and Social. More information on ALJCI's considerable set of initiatives can be found online at www.aljci.org.

About ISCP The International Studio and Curatorial Program (ISCP) is a leading nonprofit, residency-based contemporary art institution for emerging to mid-career artists and curators from around the world, including the United States. With more than 30 artists and curators in residence at all times, the program provides residents with the space, time, and support to develop new projects. With additional activities tailored for professional development and public engagement, ISCP is a platform to produce, present and contextualize contemporary art through a diverse range of international perspectives. ISCP's public programs encourage dialogue and integrate residents into the cultural community of New York City. The residency includes 24-hour access to a private studio space, studio visits from Visiting Critics; Field Trips to museums, galleries and other cultural institutions; and participation in ISCP Talks. Residents at ISCP are also invited to take part in ISCP's Exhibition Program and Participatory Projects.