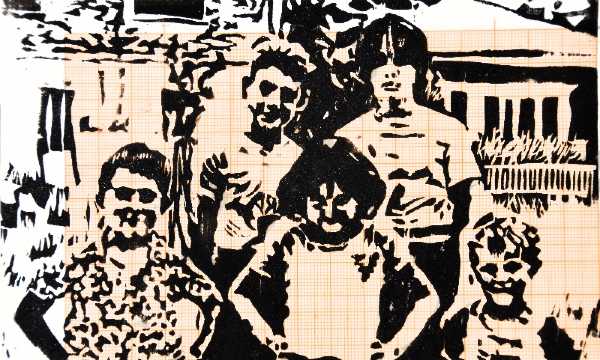 JOEY RAMONE is pleased to present the 2nd solo exhibition in the Netherlands of Greek artist Fotini Gouseti. The private view is on Saturday, June 7th, 5-8pm. The show will run till Saturday, July 12th.

Fotini Gouseti's recent work focuses on the social and ideological crisis that follows the financial one. Her case study is the small town Kalavryta, symbol of the establishment of the Greek state in 1821. She draws on the controversy that arises when after the last elections in Greece it was announced that a big amount of votes for the right-wing Golden Down came from Kalavryta. This is noteworthy because Kalavryta was totally destructed and its male population massively executed by the Wehrmacht Army on December 13, 1943.

For her exhibition in JOEY RAMONE Gouseti prepared 2 works to be presented as an installation in dialogue, 'Kalavryta 2012' and 'about 1500'.

'Kalavryta 2012', reflects on one episode from the post-war history of Kalavryta. After the war the village received supplies from the Red Cross and UNNRA. The Vagia family one day received a huge package that contained over two thousand neckties. Not knowing what to do with them, the mother of the family used them to make a traditional "kourelou" carpet. "We were starving, but walking on silk," her son recalled laughing. For this artwork Fotini Gouseti collaborated with people from the villagers and a group of volunteers with knowledge of the traditional weaving technique to recreate the carpet using about two thousand neckties.

'about 1500' depicts portraits of living Kalavrytans. It refers to the approximate number of women and children that survived the destruction. As the destruction of Kalavryta is traditionally documented with woodprints Gouseti chose to use the same medium to portray the survivors collecting images from museum archives, facebook and people's offerings.

Gouseti translates the elements that shape her work, the re-enactment of (hi)stories, the use of a traditional medium as an attempt to look into what many individuals in Kalavryta who suffered those traumatic events introduced as a need for catharsis. Aristotle refers to catharsis as of positive social function through tragedy, as the purifying of the emotions of pity and fear takes place in the viewer. But in everyday language the word is charged with a wider meaning of cleansing in different levels. Through her practice Gouseti asks if it is possible for art to contribute to a cathartic process.

Parts of Gouseti's archive will be on view as well. The 1986 docudrama "Kalavryta, December 13th, 1943" by Yannis Katomeris will be displayed as part of a video installation. This work raises issues related to the ways Civil War in Greece, (that followed WWII and constitutes the first act of the Cold War) influences till now society and narrations of history.

The architect and visual artist Isabel Marcos has designed the exhibition space.

Fotini Gouseti (Athens, 1974) was educated at The Athens School of Fine Art (GR) and for her MA she studied at the Dutch Art Institute in Arnhem, the Netherlands, graduating in 2013. She also attended studies of Social Anthropology in Panteion University of Athens. She lives and works in Rotterdam.

Fotini Gouseti's project is realized with the generous support of CBK Rotterdam.