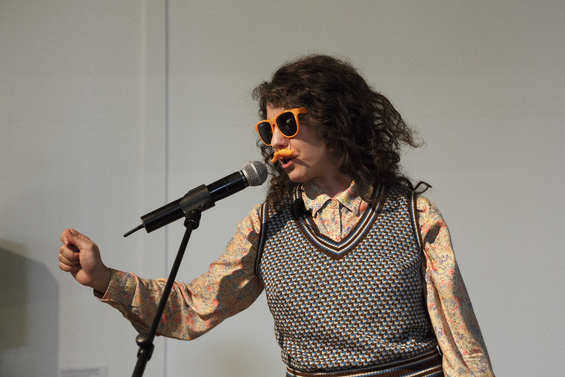 The Günther-Peill-Stiftung is an independent foundation based in Düren (Germany).

Alongside to the yearly awarding of the prominent  Günther-Peill-Stiftung Prize  of € 25.000 (in 2014 to Cypriot mid-career artist Haris Epaminonda) the Günther-Peill-Stiftung is dedicated to encourage and support, always for a period of two years, emerging artists who are already making a significant contribution to contemporary art praxis, by means of stipend of  €18.000, an exhibition at the Leopold-Hoesch-Museum & Papiermuseum Düren and the publication of an accompanying catalogue/book.

Rana Hamadeh is a performance and visual artist from Lebanon based in the Netherlands. Interested in a curatorial approach within her artistic practice, she works on long term discursive research projects that operate as umbrellas to growing series of performances, choreographic/cartographic works, installations as stage sets, and writing projects. Her work stems from an extended investigation into specific concepts and terms, treating the field of theory as fiction. Selected exhibitions include a.o. CCA Wattis Institute in san Francisco, EVA International in Limerick, KIOSK (solo) in Ghent, 2014; Lyon Biennale in Lyon, The Lisson Gallery in London, Beirut (art space) in Cairo, Witte de With in Rotterdam, 2013; Townhouse Gallery in Cairo, 2012; Van Abbemuseum in Eindhoven, 2011; Beirut Art Center in Beirut, 2010; The New Museum in New York, 2009. She graduated cum laude in 2009 with an MFA from the Dutch Art Institute/ArtEZ, and is currently auditing within the Curatorial Knowledge PhD programme at Goldsmiths University, London.