The Center for Contemporary Art Celje invites you to the exhibition 'Life of our Progressive Thinkers' by Momu & No Es (both DAI, 2013) 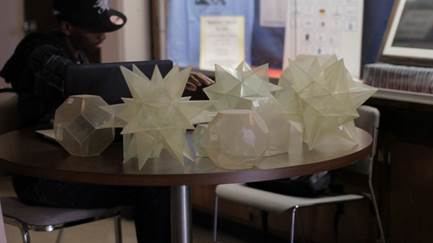 Welcome at the opening on Friday 13 December, at 7 pm, at Likovni salon.

The two Spanish artists Lucía Moreno (Momu) and Eva Noguera (No Es) have been working together as the Momu & No Es duo since 2005. Their art practice consists of video and sound works, installations and performances, which combine real and fictional elements. They create imaginary worlds, which are based on real events or people, although these are translated into new stories by the artists. Storytelling is the fundamental feature of the artistic expression of the Momu & No Es duo with their work process resembling the methodology of filmmaking. They write scripts, compose sets and costumes, make props, often playing the roles that they conceive themselves. Through their work, they ironically reflect on the prevalence of popular culture and the impact of the internet on everyday life. They merge the elements of pop with archaic forms of belief in such a way that their works often appear as totems, objects of wonder, crystals or speculative theories together with popular music, videos from YouTube, applications from the web or from mobile phones. In their last video Fan Boy (2013), we observe a young man, a fan of a Mexican singer, as he creates magical clay figurines through which anyone can be transformed into a media star. In their video Mohai (2012), the artists appear as two wacky subjectivities, spiritually empty in the middle of an urban city, who buy themselves a huge totem in a pawn shop in order to bring some happiness into their lives. In the Crandido (2011) project, they ponder on the future of technological development and invent a human-like robot, intended to coexist with people. Tales of Wonder Site (2010) is a video that the artists made in Japan, in which they star in the role of renowned writers. In an interview they explain how they created their last novel in which the main character is distinguished by the ability to see the future. The future is also predicted by the globe in the video Who Locked Bert & Ernie (2010). This time we observe the artists in the roles of Bert and Ernie, the famous characters from the popular American show Sesame Street.

Momu & No Es question the future development of mankind in their new installation composed of a video projection and promotional video. The project will see its debut appearance at Likovni salon. The introduction to the exhibition is represented by a promotional video that presents the Ceres non-governmental organisation to the viewer. Two characters, based on real people, appear in the video projection Life of our Progressive Thinkers. American Robert Haag is a meteorite hunter, whom the artists met in Arizona and with whom they recorded several interviews in various locations. Spaniard Carlos Blanco is a young genius, who was fascinated by Egyptology at the early age of seven, and was already translating ancient Egyptian records by the time he was eleven years old. They are shown in the video as two figures that significantly contribute to the development of biotechnology and nanotechnology with their knowledge, which leads mankind to the next level of the evolutionary process. In terms of time, the video takes place in the future, the basic scenario consisting of a voice over, which describes the flow of events that have affected the situation in the future on the basis of past events. By creating special masks, the artists play the parts of Carlos and Robert in the video themselves.