Celje Center for Contemporary Arts presents The Air of Songs, exhibition curated by Maja Hodošček (DAI, 2013) with works by Katarina Zdjelar, Franc Purg, Momu & No Es (DAI, 2013) and others 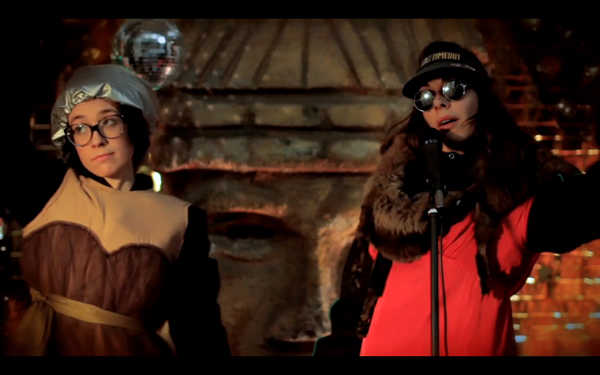 The Celje Center for Contemporary Arts cordially invites you to attend the opening of exhibition The Air of Songs on Friday 6 December at 7 pm at Gallery of Contemporary Arts and the performance by Franc Purg & Voodoo Mule at Likovni salon Gallery at 18. 30 pm.

The international group exhibition The Air of Songs is the materialized portrayal of the bonds that have sprung from the activities surrounding the AIR CELEIA artist's residency programme at the Center for Contemporary Arts in Celje. The year 2014 will see the 10th anniversary of its implementation, and with it the aspiration to meet up again with the foreign artists that were hosted in Celje, bringing together also the Slovene artists that were given, through the joint partnership, the opportunity to live and work in Ireland as part of the artist's residency at Flax Art Studios in Belfast.

Presented in this year's exhibition (the Center is planning a series of exhibitions that will be sequenced every three years) are the works of eight artists and two art collectives.

The AIR CELEIA programme was initiated due to the changing production conditions in making art, primarily since more and more artists are giving up studio practice in order to replace it with work in the social arena, within national borders as well as beyond. Networking and making connections with the space as a defining factor in the production of art demands a mobile and flexible way of working from the artist. Studio practice is expanding into artistic research, which emphasizes processuality, a way of working that encompasses a co-operation with different social communities, study of historical and political contexts of a particular area, a direct involvement in the local environment or the response to specific processes that occur in a given area. Residency programmes also allow for the dimension of time, which is required for this kind of work.

The Center for Contemporary Arts did not wish to establish a residency programme with a strict institutional character, but a friendly environment with close links to local events. Such an environment creates trust and reciprocity, it is important for creating lasting ties that go beyond the time frame of the residency. Exposing the forms of cooperation that allow for a continuity of functioning is one of our basic policies.

The Air of Songs is therefore an exhibition that is primarily conceived with the aim to re-actualize the existing international links. This includes work created after the residency in either Celje or Belfast, hence offering an insight into the most recent art practice of the participating artists.

The works which are diverse in subject matter (from addressing scientifically unprovable phenomena such as the paranormal field, to the reinterpretation of events from the past or exposing the topical issues of today, the power of the entertainment industry in forming a collective consciousness, the effects of consumerism on individual subjectivity and the natural environment ...) all share an explicit use of sound, various ways of using the voice, music, singing . And this is also where the title of the exhibition comes from.

In the video One Dog, a Man and an Island Mark Požlep sings the Santianna sea shanty. Franc Purg is preparing a performance in cooperation with the Voodoo Mule heavy metal group, which will last several hours. Using painterly means, Iva Tratnik depicts singing and dancing animals. In her piece How to Sing in Public, Helen Stratford invites the viewer to make a personal space for their own voice in public space.
Katarina Zdjelar presents the process of a voice modulation in her video Stimme, highlighting the use of the voice as a technique that can lead to the self-empowerment of the individual. In the video Variable Physical Status by HR-Stamenov, where sound is replaced by silence, we observe the "speech" of a Bulgarian politician. Talking as an expression of creative thinking is present in Susan MacWilliam's piece F-L-A-M-M-A-R-I-O-N. In parts of the video we observe the Irish poet and writer Ciaran Carson reciting his poetry together with words from a filmmaking glossary.

Nika Oblak and Primož Novak invite us to the cinema by offering us a parody of the trailer for Pulp Fiction, in which pop music contributes significantly to the atmosphere of the work. In the video Mohai by Spanish collective Momu & No Es, pop music appears in the form of a song on playback, which mainly serves as the reason to bring together two fictional subjectivities lost in the middle of an urban city. We can eavesdrop to the sounds of the urban city in the work of Jaroslav Kyša.

The exhibition will present three new projects. Artist Franc Purg has conceived a performance lasting for several hours especially for the exhibition, Helen Stratford has produced a new sound piece entitled How to Sing in Public, whereas Iva Tratnik will be presenting her latest paintings bearing the title Post Human.