Opening Transeuropa Festival / Anna Hoetjes (DAI, 2012): IMAGINE, DEMAND and ENACT an alternative Europe / Don't miss the action at Dam Square on Saturday October 5th; Download the Track and be there at 14.00 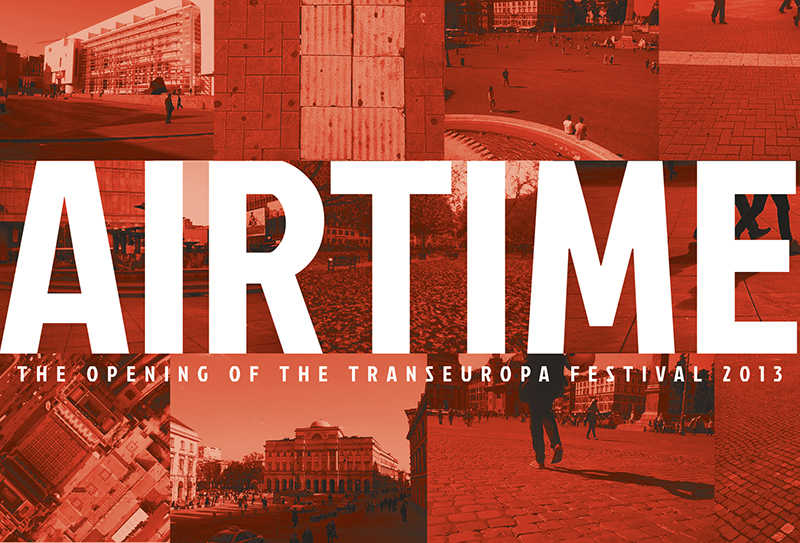 AIR TIME is an audio artwork that will be experienced and performed synchronously across Europe on October 5th at precisely 14.30 CET. It is a collective action, which takes place in public space in ten European cities. AIR TIME explores the role of protest and shared action, keeping in mind the recent and on-going mobilisations taking place all over the world (e.g. Turkey, Brazil or Greece). It invites everybody to actively take part in it.

In order to participate it is necessary to download the audio track to your mp3 player or smartphone from the website of the Transeuropa Festival, where it will be available in ten different languages from October 1st. Bring your headphones and be there quite some time before the start. It will last about 35 minutes. Stay informed through the Facebook event and feel free to forward this information to friends in Amsterdam or other participating cities.

AIR TIME is the result of the collaboration among 13 artists invited by high-profile personalities from the European art world:

Anna Hoetjes, Amsterdam (invited by the collective If I Can't Dance);

The production of AIR TIME has been coordinated by the German artistic collective Ligna. Established in 1997, Ligna is a group comprising the media theorists, radio, theatre and performance artists Ole Frahm, Michael Hueners and Torsten Michaelsen.

The performance is the outcome of three workshops in Berlin (Deutsches Architektur Zentrum), Rome (Museum of Contemporary Art) and Sofia (Red House). The workshops focused on the role and use of protests and explored the idea of collective action. The process of collaboration established among the artists, intended to reflect on the relationship between new ways for sharing information offered by new technologies and the potential collaborative practices that emerge as a consequence. The performance looks at strategies of appropriation of a mass medium and its possible mode of use in public space.

AIR TIME is performed as the opening of the Transeuropa Festival: an artistic, cultural and political festival, taking place simultaneously around Europe. Through a varied programme featuring cultural, artistic, open-air, and academic events, Transeuropa Festival 2013 offers a space to IMAGINE, DEMAND and ENACT an alternative Europe. The Festival features key intellectuals and artists, and attracts a young and mixed audience. It is a unique transnational festival: It takes place in 13 cities not as 13 different festivals happening at the same time, but as one truly European festival. Transeuropa Festival is organised by volunteers and supported by the professional team of European Alternatives. Each event is the result of partnerships and collaborations with NGOs, artistic and cultural institutions, creating a net of more than 100 organisations throughout Europe. All events are free and open to everybody.