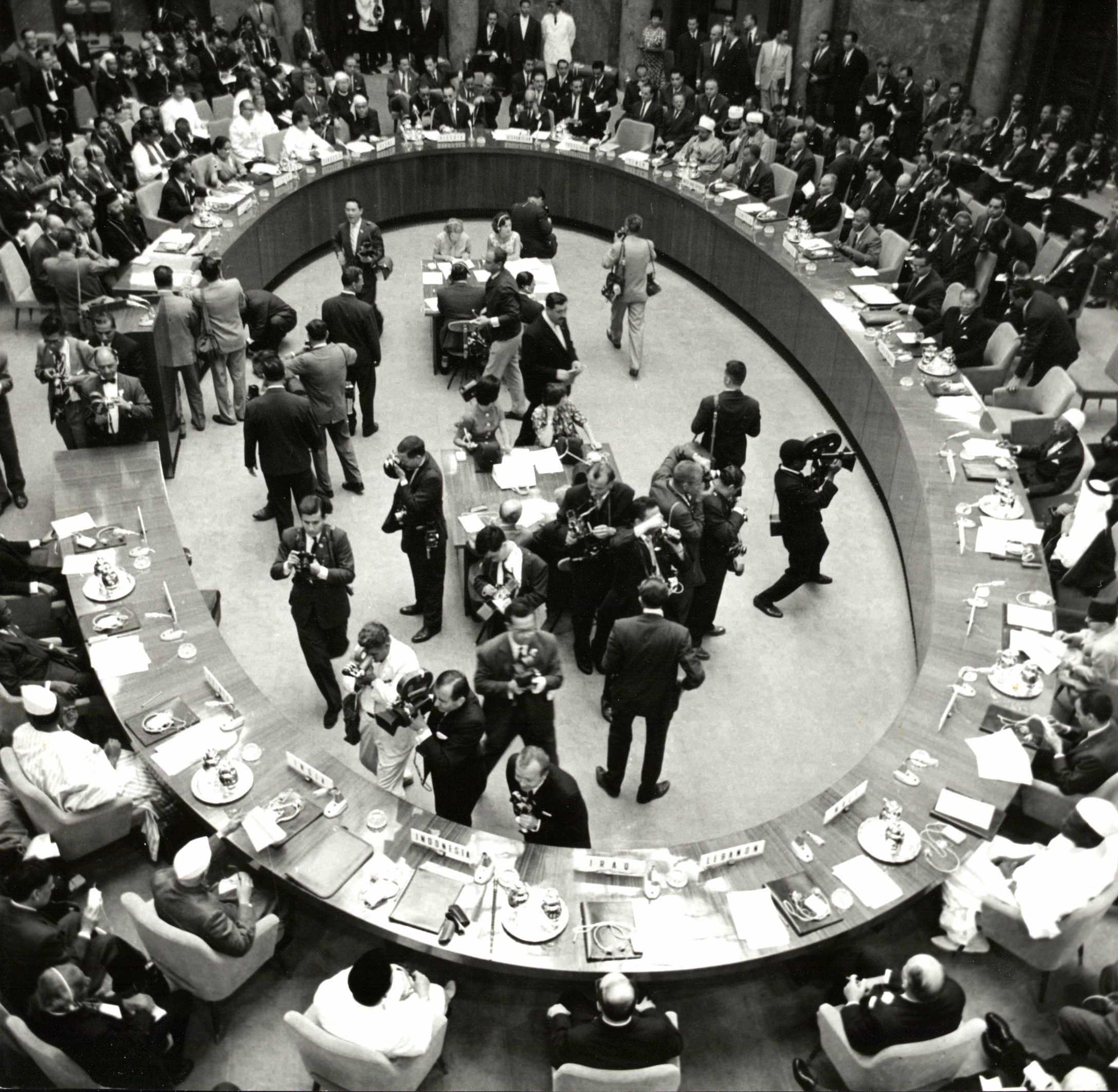 MYH K-170/30, hall for plenary sessions on the opening day of the Conference of Non-Aligned Movement, Belgrade, September 1, 1961. © Museum of Yugoslav History, Belgrade.

Travelling Communiqué: From Belgrade, September 5, 1961 at the DAI is an educational segment of a long-term collaborative project* into infrastructures and politics of the Non-Aligned Movement (NAM) in order to understand what the NAM has produced to teach us to live and work in the era of globalization of the 21st century.

The NAM was the first trans-national confederation of nations based on the right of self-determination against colonialism and neo-colonialism, and the demand for non-interference in the internal affairs of its member nations. It declared their non-alignment from binary world politics after 1945, exemplified by the Cold War with U.S. / Soviet Union as its opposing powers, that had put the world into an ongoing situation of a permanent war. The participating nations of the first Summit of the NAM in Belgrade in 1961 were Afghanistan, Algeria, Saudi-Arabia, Burma, Cambodia, Ceylon (today Sri Lanka); Cyprus, Congo, Cuba, Ethiopia, Ghana, Guinea, India, Indonesia, Iraq, Lebanon, Mali, Morocco, Nepal, United Arab Republic (Egypt, Syria), Somalia, Sudan, Tunisia, Yemen, and Yugoslavia. On the 5th of September in 1961, the twenty-five Heads of States and Governments of the Non-Aligned Nations signed and sent off a collective message (in form of a written letter) as one result of the first Summit Conference of the NAM held in Belgrade, Yugoslavia. Its addressees were John F. Kennedy and Nikita Khrushchev in their representational functions of the Great Powers.

The letter was one form of a Communiqué [public statement] of the voice of those who had no public presence within the binary world order, and was addressing those who had been responsible for a world in war. In other words, the NAM can be seen as an early example of globalization, i.e. a strategic structuring on global scale in form of a confederation for the purpose to internationalize a political Cause, which is the Cause of independence from colonialism, and from any other principle of hegemonic powers. It is important that the NAM emerged from an anti-colonial agenda on a global scale, but not in whole. Being multi-dimensional and internally heterogeneous, NAM changed its subject matter from the political cause to statehood, which in time became the crucial point of the conflict and the inner split within the Movement itself. Within this framework, the first summit of NAM in Belgrade in 1961 is the first major attempt to make the politics of the NAM public on an international scale. Its ambition for internationality as well as public exposure can be traced in an excess of image production, as we can observe it in the photographic archive of the Museum of Yugoslav History in Belgrade Collection (containing the Presidential Press Service of Josip Broz Tito), it can be traced in hundreds of cables/files of Secret Services (e.g. of the U.S.), in the documentation of all speeches during the Conference, in many publication productions during that time (e.g. in Yugoslavia), and also in letters / telegrams which were send from the Conference itself in 1961. The project speculates that the collective message, send from Belgrade on September 5 in 1961, never arrived at their intended destinations, but still continues to travel. It speculates further that since then and on its way, it has been mistranslated, misread, neglected, forgotten and misunderstood. Therefore, and importantly, the project is not a historical reconstruction of the NAM but aims to make use of the accumulation of mistranslations / misunderstandings / missing knowledge; it is interested in the modes of production that departed from the NAM since 1961 until the present. This speculation invites us to ask: Who is the addressee of the Communiqué in the era of globalization of the 21st century? Who is producing the Communiqué today? If this project referred to the letter of the 5th of September in 1961, then this letter is only one possible example how a Communiqué may look like and how a public statement finds its way on display. The letter – from Belgrade, September 5, 1961 – enables to concretize the re-visiting of the consequences of NAM's politics and infrastructures, but the letter is neither in focus as a single document per se. Instead, the letter exemplifies the act of making public as a political concern on global scale. In other words, Communiqué is the right for self-determination of all those whose voices do exist but are silenced by dominant forces; the letter is only one possibility in the plethora of strategies to give form to a silenced voice. It may find its expressions in any other forms of articulation (architecture, film, poetry, photography, etc.)

The project at the DAI will request independent research from the participating student, e.g., reading and researching archival photographs from the Museum of Yugoslav History in Belgrade, but also any further forms of production in relation to the inquiry into the modes of production of the NAM in order to make visible the Movement's relevance from a today's perspective. The photographic archive of the Museum of Yugoslav History is available for research, but not compulsory as working material. In other words, any further archival material, or any other material is possible to work with if a certain relevance in relation to the project's concern can be reasoned. The major aim of the course consists in the development of the student's ability to decide, to focus on and process a particular aspect within a complex research subject such as the geopolitics and productions of the Non-Aligned Movement with its relevance today. Each student is expected to develop his / her own individual work supported by the course curriculum as well as the course tutor and guest tutors. The working methods consist in reading texts, discussing other works, commitment to thought exchange in the group, open-mindedness to experimentation, trans-cultural thinking, geopolitics, and an interest in research and theory – all as sources to specify the research process and to find the appropriate means of artistic articulation over the year. Along this line out, each course's session (two days) takes place with the core tutor as well as different guest-tutors (artists, filmmakers, curators, theorists): first day, guest tutors introduce projects to provide a ground for deepening / comparative discussions during the plenary group session (one or two sessions will take place without guest tutors in order to process the update/exchange within the group). During the second day, the student will have face-to-face meetings with the tutor as well as guest tutors to discuss their individual works in detail.

The project group will undertake a journey to Ethiopia in early 2014, particularly Addis Abeba, in order to meet artists, thinkers, and theorists to learn about the consequences that the Non-Aligned Movement had in Ethiopia from a today's perspective. In preparation of the journey, each course's session contains a short presentation (20–30min) about a specific aspect or protagonist in relation to Ethiopia today; the short presentations will be prepared by one or two students each session (research material will be provided, further research/proposals are welcome) The aim of the trip to Ethiopia is not to produce a work in relation to Ethiopia, but rather to understand the particularity of the Ethiopian horizon within a political initiative on global scale. Which impact did the NAM have in Ethiopia? What did the NAM activate and produce in terms of architectures, narratives and knowledges from an Ethiopian perspective? In which way is the NAM-moment of 1961 extended in Ethiopia of 2013, if at all?

The project Travelling Communiqué has its first 'public moment' in the exhibition After Year Zero at the House of the World Cultures in Berlin; and will continue in an public presentation/exhibition at the Museum of Yugoslav History in Belgrade in April 2014. Ideally, the DAI student group contributes to the exhibition in Belgrade in one way or another.

Travelling Communiqué will open on June 10, 2014 at the Museum of Yugoslav History (MYH) in Belgrade, with a durational 'public moment', taking the form of an exhibition, film program, a series of working meetings, a summer school, lectures and panels between June – August 2014. The exhibition at the MYH is realised in cooperation with the Goethe Institute Belgrade and supported by the Foreign Office of the Federal Republic of Germany and the Photographic Collection of the Museum of Yugoslav History, Belgrade.