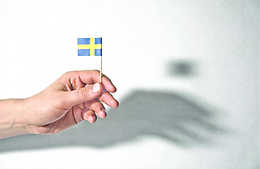 During the summer of 2013 informal strategies will be developing their project Our Swedish Neighbor at IASPIS in Stockholm. Here they will trace back IKEA's corporate identity to its socialist past. Next we want to construct a new identity, in which the Swedish flag is replaced by that of a Hyper-Nation (the imperium of a multinational).

This residency is supported by the Mondriaan Foundation as part of their guest ateliers.