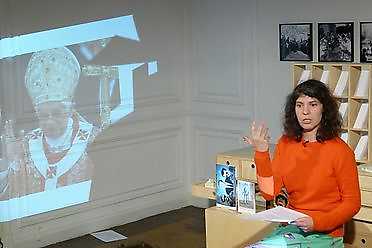 Beirut wants to break the spell of the State as a theater of fantasy. She works hard. She tries to make her own magic with stories culled from newspapers; she invites artists to intervene in them. Her story is moving. But what do we make of these stories, and what do these stories make of us? And will they survive? [1]

Season One (10 October 2012–14 January 2013) at Beirut examined labour in the loves and lives of images, and drew on a drawing's desire. Amidst current affairs Season Two (7 February–6 April 2013) tests the relationship between magic, power and resistance and their connection to the modern State, whilst reflecting on notions of history and its revision, collective memory and national identity.

In February, artist Azin Feizabadi visited Beirut for a month and presented new elements from his on-going project A Collective Memory. We invited 98weeks from Beirut to present an evening of films on resistance and the State from different geographical and historical perspectives. Also, this season, (a(version)s) (2012) by Joe Namy lives in our library, while Indent in collaboration with Egypt Independent gains momentum, having featured interventions and in-situ works by Carlos Amorales, Taha Belal, Dan Perjovschi and Azin Feizabadi, with more to come.

Currently on view is The Magic of the State, an exhibition and editorial project conceived by Beirut in Cairo and Lisson Gallery in London. The exhibition is a collaboration and encounter between two contrasting art institutions operating in very different contexts: a not-for-profit art space in the making and an established private gallery. This practice-based exchange opens up a shared space for reflections on the different economic, logistical, social and political realities these institutions live.

The project is titled after anthropologist Michael Taussig's eponymous book from 1997. Historically placed at the intersection of science, religion and politics, the concept of magic exists in an integral relationship to that of power. Magic's coerciveness lies in its power to transform, simultaneously holding together the desire to believe and the desire to doubt. Here, politics and magic, statecraft and stagecraft, converge as performance.

Two discrete yet interconnected exhibitions in Cairo (3 March–6 April) and London (27 March–4 May) feature a different constellation of works by the same artists, including new commissions, and a public program of performances, talks and screenings.

The selected and newly commissioned works by Ryan Gander, Goldin+Senneby, Rana Hamadeh, Anja Kirschner and David Panos, Liz Magic Laser, Christodoulos Panayiotou and Lili Reynaud-Dewar question the legacy of outmoded systems of beliefs and mythological principles within the modern State, pointing to the slippage between the prescriptive intent and the idiosyncratic manifestations of stately power. They chart the potential of alternative aggregations, and explore the possibility of resistance by thinking laterally and looking at unorthodox places.

The exhibition in Cairo opens on Sunday, 3 March with a performance by artist Lili Reynaud-Dewar with iconic club performer Mary Knox, and experimental musician Hendrik Hegray, featuring texts by Sun Ra and records from "La Grande Oreille" collection. On Tuesday, 5 March Michael Taussig revisits his book The Magic of the State in a lecture held at Beirut in Cairo. The opening week will continue with a lecture-performance by artist Rana Hamadeh on Thursday, 7 March.

Following the show a compendium on art, magic and politics will be released. It will feature essays, spells, fiction and true stories in both English and Arabic, with contributions by Will Bradley, Hany Darwish, Michael Taussig, a telephone conversation between Peter Lamborn Wilson and Evan Calder Williams, and others.

In March, Beirut hosts artist Anja Kirschner, conducting research on the history of Egyptian horror movies and the way they could be seen to reflect major political events, externalising social and personal trauma through the "supernatural."

In April, theatre director Laila Soliman will present her forthcoming project Here, there and everywhere/Hopes, a performative research looking into what is said about State Security Systems between myth and reality in Rabat, Cairo and Berlin.

For a full program of our events find us on Facebook at "Beirut in Cairo" visit our homepage and sign up for our monthly newsletter here.

About
Beirut is an art initiative and exhibition space that considers institution building as a curatorial act. It is founded on the belief that change first needs to be imagined in order to be achieved. The year at Beirut is conceived in three seasons, each comprising a series of exhibitions, seminars, workshops, rotational studio and research projects, in addition to talks, screenings and publications. Beirut's facilities are open to a local and international public, including library, communal workspace and rooms with a view over Beirut for visiting artists, curators and writers.

As a small art initiative with big plans, Beirut needs your support. If you would like to donate books in exchange for Indian mangoes or write us a cheque, story or love letter please contact us at office@beirutbeirut.org.

The Magic of the State is conceived in collaboration with Lisson Gallery in London and supported by the British Council, the Institut Français d'Egypte and the Contemporary Image Collective in Cairo.

Beirut is made possible with the structural support of Townhouse and the Foundation for Arts Initiatives.