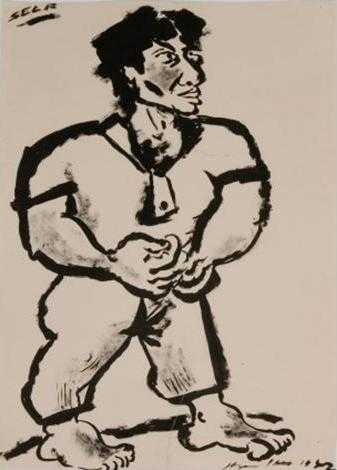 Re-presenting Histories is an on-going programme of exhibitions and events curated by Suman Gopinath and Grant Watson that re-visits recent Indian art history with a view to recuperating legacies of avant garde practice and archiving lesser known bodies of work that slip between genres and schools.This refocusing of attention on singular practices makes it possible to analyse artists' work in terms of the context in which it was made, and look at its relationship to schools and movements elsewhere. As a curatorial rather than strictly art historical endeavour, this project uses various formats, including workshops/seminars, exhibitions, publications and commissions by contemporary artists. It is conceived as a collective process drawing on practitioners from different disciplines both in India and internationally. Suman Gopinath and Grant Watson are currently working on in this series are Nasreen Mohamedi (1937-1990) and K P Krishnakumar (1959-1989). They have been collaborating on projects ever since 2000 when they curated the exhibition Drawing Space: Contemporary Indian Drawing in London. Their most recent curatorial collaboration was the exhibition Nasreen Mohamedi: Notes ( 2009 – 2011) that was initiated by Office for Contemporary Art Norway, Norway and has travelled to six venues in Europe.

Grant Watson is a curator and writer based in London. He works as Senior Curator (part time) at the Institute of International Visual Arts (Iniva) and is engaged in freelance projects internationally. At Iniva he has curated exhibitions including Social Fabric and organised the Keyword lectures, which will be realised as an exhibtion in collaboration with Tate (2013). At the Museum van Hedendaagse Kunst Antwerpen (MuHKA) 2006 – 2010 his projects included Santhal Family Positions Around an Indian Sculpture and Textiles Art and the Social Fabric. From 2001 – 2006 Watson was Curator of Visual Arts at Project in Dublin and has worked with Indian art since the mid1990s, including researching this for Documenta 12 and co curating the touring exhibition Nasreen Mohamedi: Notes produced by the Office for Contemporary Art Norway (OCA). At DAI he will be teaching the 2012-2013 "Curating Academy" class ( together with Frederique Bergholtz).

The Curatorial Digest is a new discussion series that will explore curatorial ideas, research and practices in contemporary art. Through particular exhibitions and projects, this series will unravel what curating means in different contexts, including private and public spheres. While connecting the visual, conceptual and performative aspects of exhibitions, this series will examine curatorial approaches as an ongoing process interlinked with contemporary art history.

Admission free and open to all.