We Notice No Disturbances / on 'travel in an age of interconnectivity' / an exhibition with Julien Grossmann (DAI, 2008), Jeremiah Day a.o. 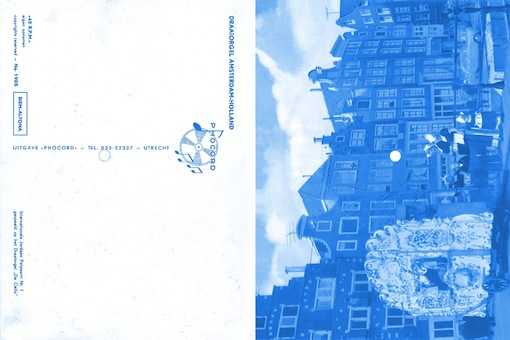 The antiquated novelty of the sound-postcard - a postcard and 45 record in one - is the point of departure for considering an exhibition dedicated to the art of bridging the distance of time or geography through sound; it embodies the notion of the sonic image, the transmission of a personal message through word and song. Naturally, the postcard also automatically connotes travel. It implies the touristic ritual of the brief message and bright-colored image sent as a testimony of the places visited.

The works in the exhibition reflect the experience of travel in an age of interconnectivity, when the stories of one place often collapse into the histories of another. The touristic experience is reflected as no longer being completely "innocent" or unburdened. As a highly evocative medium, sound lends an emotional layer to the experience of a place or a place in time. As music it can have an enchanting, mesmerizing effect, or as found footage it can rupture a sense of the exotic or the sublime. The element of notation on place - as a text or musical score - is inherent to all the works presented, in which personal narrative or individual approaches to sound serve to heighten the experience of a distant site as forms of improvisation, critique, or resonating memory.

In Song-Ming Ang's You and I (2009-) the artist asks members of the public to write him letters telling him a few personal things about themselves – memories, compulsions, experiences, secrets, ambitions, etc. Based on the contents of the letter, he makes a personalized mixtape (in the form of a CDR) and mails it to the sender as a response. These letters and the CDs are then exhibited with the permission of the participants.
Ang's video Be True to Your School (2010) originated from his residency in an old school building in Japan. The artist invited former students of the elementary school to sing their school song in front of a camera. They were first recorded on video individually, many of them pausing and struggling to remember the lyrics. Subsequently the participants were invited to sing the song as a group. Ang filmed this chorus, which he accompanied on a glockenspiel.

Kajsa Dahlberg's installation We notice no disturbances, all are happy and friendly, (Postcards from Jerusalem 22/4 1911–24/1 1999) consists of some 600 postcards sent over a ninety-year period from Jerusalem to Sweden. The artist came across these cards while researching a group of Swedish Christian settlers in Palestine, who began producing postcards for economic survival. Even with their brief messages, the postcard archive chronicles the changing times and historical conflicts that have marked Jerusalem over the decades.

Jeremiah Day's work No Words for You, Springfield is a cross-Atlantic exploration taking the form of 16 photographs and a performance documentation. Attempting to trace the mass migration of Irish from the Blasket Islands to the US town of Springfield, Massachusettes, Day found that no discernable culture or tradition from Ireland has been preserved in the new world. Instead he encountered the decay endemic to American post-industrial cities. Documentations of Springfield's urban ruin, Day's photographs are inscribed with hand-written text; theyparalleling the ruins on the Blasket Islands, which were evacuated in the 1950s. Through the printed interview Springfield-based historian Douglas Valentine the work assumes an almost archaeological dimension — lyrically probing the depths of the American political psyche.

Julien Grossmann has worked extensively with early ethnographical recordings and music from across the globe. For his work KOKIN (...) SLENDRO Grossmann has created his own compositions based on different tonal systems throughout the world. These were pressed onto records, which double as miniature, white islands suggesting very different types of landscapes. The records play almost magically in succession, with each island rotating around its own access to emit a series of highly diverse soundscapes.

Sven Johne's recent work has dealt with the island of Lampedusa and the paradoxes of the island as both a tourist destination and a site where innumerable refuges from Africa have landed—or died just before reaching its shores. The photographic series Traumhotels taken from the window of a humble hotel runs counter to idealized images of a Mediterranean paradise and suggests other, more ominous realities.

Sal Randolph's Ambience Scores are transcriptions into language of the ordinarily unheard sounds of place.  They are alphabetically rendered sound compositions, which can be "read," allowing place to be performed as voice. Made on a portable manual typewriter, the Ambience Scores on view have been created for the exhibition at specific public sites in New York, which have in some way been politically contested. The series of work as a whole follows Randolph's ongoing studio practice of "Language Drawing" and is a continuation of her interest in instructional art.

Truly a contemporary take on the sound postcard, Tomáš Werner's Landscape Spectacle is a video work that was created during the artist's visit to the Grand Canyon. A static shot of the majestic landscape is on view, while in the background one hears a multitude voices from the masses of tourists coming and going from an apparent lookout site - a concert of languages and exclamations lasting half an hour.