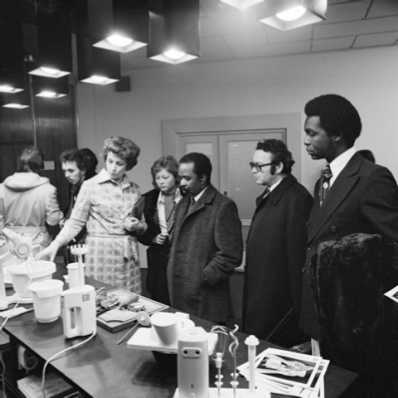 (TYI: Doreen Mende is a member of the DAI faculty)

Double Bound Economies begins with a photo archive from the German Democratic Republic (GDR). The photographer of the archive is Reinhard Mende. Produced as commissioned works, these photographs document and dramatize the situation of productions in Volkseigene Betriebe (VEBs; people-owned enterprises) and the Internationale Leipziger Messe from 1967 to 1990.

The trade fair in Leipzig was then the most important site of trade between the East and the West, and so these photographs in particular mark an economic space that had two sets of ties: socialist ones, in terms of its production, and capitalist ones, in terms of its presentation. They included ties to the countries of the former Non-Socialist economic region (NSW), such as the Federal Republic of Germany (FRG), Sweden, and France, as well as countries that since the mid-1970s had been involved in revolutionary struggles for liberation, such as Angola, Mozambique, and Ethiopia.

From that starting point, Double Bound Economies moves toward contemporary artistic and spatial positions, historical and theoretical analyses, and the production of a video project. The various forms of practice, both in terms of reading the archive and of the sometimes independent actions of the artists, raises the following core question: What forms of articulation are available to us to grasp the contradictions of the mutual involvements of socialism and capitalism in the form of design and visual production and to make them useful for current problems?

Double Bound Economies is centered on collective practice as a method of bringing things up-to-date, both in relation to the presentation of the archive and in the spirit of a curatorial method. Artists, theorists, scholars, and former participants were invited to view, comment on, or select from the archive. This collective work method resulted in a polyphonic dramatization of the archive while also reporting on a nonlinear approach to the GDR.

Double Bound Economies is curated by Armin Linke, Doreen Mende and Estelle Blaschke who form the group PRODUZIEREN and is adviced by Philip Ursprung. It consists of a traveling exhibition (architecture: Kuehn Malvezzi), a publication (design: Werkplaats Typografie, Arnhem; publisher: spector books, Leipzig) and a website that will make the archive accessible to the public for the long term (www.doubleboundeconomies.net).

Double Bound Economies opens as a guest exhibition in the independent art center HALLE 14 in Leipzig Station, which since 2002 had been using a twenty-thousand-square-meter production hall on the grounds of the Baumwollspinnerei in Leipzig for exhibitions of contemporary art and other art projects.
Double Bound Economies has been produced in collaboration with the Hochschule für Gestaltung Karlsruhe and is supported by the Stiftung Federkiel.

The project is funded by the Kulturstiftung des Bundes (German Federal Cultural Foundation).