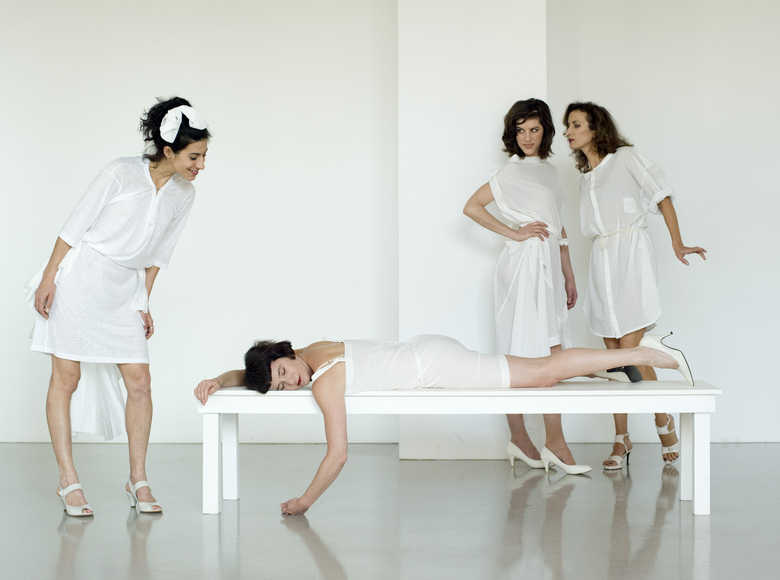 This Spring, If I Can't Dance presents Five Sisters (1982, Guy de Cointet) in the U.S. at the Los Angeles County Museum of Art (27/04) and the Museum of Modern Art in New York (9/5 and 10/5). The performance is part of the ongoing research project by Marie de Brugerolle within our programme Performance in Residence. This new iteration of Five Sisters is performed by cast members Violeta Sanchez, Einat Tuchman, Adva Zakai and Veridiana Zurita. The light and stage design is by Elizabeth Orr and the wardrobe by moniquevanheist. The play is directed by original Five Sisters cast member Jane Zingale, who also performs the short accompanying monologue Espahor ledet ko Uluner!
Later this year, If I Can't Dance will publish a Five Sisters research publication that explores the nature of performance research and production through commissioned essays, a conversation with the cast and documentation material. The book addresses the various questions that arose in the making of Five Sisters including the relation between this restaging and the original play, the status of the play as a document and the choices that were made in the production process. It also offers further analysis on the themes of beauty and health, light and emotion, decay and stress, and language and foreignness. With contributions by a.o. Marie de Brugerolle, Elizabeth Orr, Vivian Ziherl and the cast. The design is by Will Holder.
Two visitor accounts of the performance have been written by Snejanka Mihaylova and Aukje Verhoog after the premiere at Frascati Theatre in Amsterdam in October 2011. Mihaylova writes "(...) The original play proposes to us a critique in so far as it denounces, which however is impregnated with subtle elements, in which an affective dimension is present. The operation of reproposing the document as performance acts under a different proposition, which isolates the affective element and returns it to life as a potential condition. The exhausted image of the woman becomes the inexhaustible potential of the female condition. (...)"

The US tour of Five Sisters is sponsored by Étant Donnés. Courtesy Estate of Guy de Cointet and Estate of Eric Orr. Five Sisters is initiated by If I Can't Dance (Amsterdam), MUSAC (Léon) and STUK (Leuven) and additionally co-produced by LACMA (Los Angeles), MoMA (New York), and Reina Sofía (Madrid). In MoMA Five Sisters will be performed in the programme Words in the World.
The programme of If I Can't Dance is financially supported by the Mondriaan Foundation, the Culture Programme of the European Union, the Amsterdam Fund for the Arts, and the Netherlands Foundation for Visual Arts, Design and Architecture.