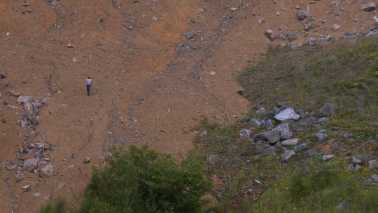 You are kindly  invited to the new version of the groundbreaking performance Among the multitude. This piece was created in 2009 with 70 people from Amsterdam, and will now be reinvented with people from Leuven in STUK kunstencentrum.

In Among the multitude David Weber-Krebs transforms the theatre space into a cinema.  A man is wandering around in an open landscape. He is in exile, an alien, looking for something in the wrong place, in the wrong way. When he finally enters a forest we are brought back to the social space of theatre. The film that was uniting the spectators by offering them a window to look at the world has disappeared. A shift occurs from a situation of looking at art to a situation of looking at each other. Now we are many. People looking back at people.

Among the multitude is a proposition to review and rethink our position as collective viewers of ourselves and of the world around us. It is a journey from the deepest of our European landscape to the shared and enclosed space of theatre.

Among the multitude is made with people from Leuven and in collaboration with Mike van Alfen, Seppe Baeyens, Hans Bryssinck, Ugo Dehaes, Elke Lahousse, Suze Milius, Natascha Pire, Tjebbe Roelofs and Anne Rooschüz.