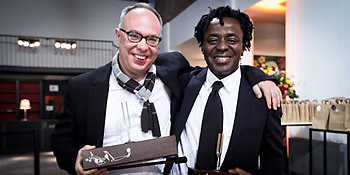 It is with pride ( because of the DAI's structural partnership with the Van Abbemuseum, energetically lead by Charles Esche ) and with heartfelt approval of the ECF's firm gesture (opposing the deliberate and ongoing erasure & destruction of values other than those of neo-liberal capitalism in these dire times of so called "crises") that the DAI applauds the the longstanding careers and commitments of the awardees; John Akomfrah and Charles Esche.

The European Cultural Foundation (ECF) is pleased to announce that London based film-maker John Akomfrah (1957, Ghana) and curator Charles Esche (1962, England)—Director of the Van Abbemuseum in the Netherlands—received the ECF Princess Margriet Award on 19 March 2012 at a packed ceremony at the Egg in Brussels.

The award is given out annually to European artists, intellectuals and activists who envisage a truly intercultural landscape and strive for societal change.

In her opening speech, Princess Laurentien observed that 'the Europe we have today is still young and will not last unless we continue to build, invest in and visualize our future'. She praised the laureates for pushing boundaries and generating images of who we are and who we might become.

Jury member Jan Dibbets praised the two laureates and said they were both chosen unanimously by a team of international jurors. The laudation praised Akomfrah for producing a vital body of work that interweaves stories of the migrants of Europe, defying purist notions of cultural identity, and focusing on the experience of becoming and the capacity to change. Charles Esche was praised for his work as a key independent curator and critical voice—work that has revealed the radical potential of the museum to be a site of hospitality and genuine knowledge exchange.

The 350 guests were delighted at the showing of John Akomfrah's new film piece entitled Peripeteia, a moving visualization of two characters drawn in the 16th century by Albrecht Dürer—a black male and female whose stories have been 'lost to the winds of history'.

Both laureates received prize money of 25,000 Euros and a uniquely crafted award made by Nathalie Bruys.

Esche spoke in the debate of the need to invest in art and culture so that 'our old Europe' and its value system' can be renewed, and Europe take its part in the emerging one world.

Report of the debate 'Politics, economics and culture: a different balance?' available at www.eurocult.org/node/2417.