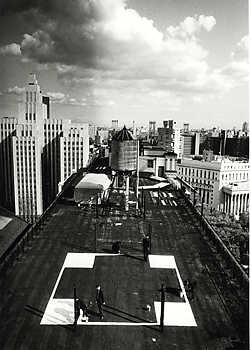 Last November for two days Borut Vogelnik, founding member of IRWIN was the honoured guest lecturer for the project Situating Artistic Practice curated and organized by the Van Abbemuseum for the DAI .

Calvert 22 now presents two concurrent exhibitions exploring the work of the most influential art movement from the Balkan region in the latter half of the 20th century – Neue Slowenische Kunst (NSK).

NSK was established in the early 80s in what was then Yugoslavia, by founding member groups Laibach, IRWIN and Scipion Nasice Sisters Theatre. Concerned with the political unrest in the region at the time as well as issues of national identity, NSK's cross-disciplinary projects encompassed theatre, music, painting, literature, philosophy, design and performance breaking through the limitations of the visual arts, reaching into society at large.

TIME FOR A NEW STATE will be the first major UK exhibition of IRWIN, the visual arts component of NSK, founded in Ljubljana in 1983. IRWIN's work is primarily concerned with the complexity of the image and the idea that an image is never neutral, nor is the space it is shown in. In its artistic projects, IRWIN has been extensively involved with the art history of Europe, in particular with the dialectic of the avant-garde and totalitarianism. This ambitious exhibition marks the twentieth anniversary of IRWIN's seminal NSK Moscow Embassy project and includes a special adaptation of Transnacionala (1996), Kapital (1991) an early work in the Wast Ist Kunst? series, as well as East Art Map which seeks to redress the persistent exclusion of contemporary Eastern European Art from the canon of modernism. The exhibition uniquely extends into the public realm via a specially commissioned IRWIN artwork on the Elephant & Castle roundabout—a billboard ambiguously pointing to the notion of The State In Time.

Concurrently, the downstairs exhibition space of Calvert 22 will house a selection of NSK Folk Art, a diverse collection of artworks and artefacts created by the citizens of the NSK State in Time. This virtual state, formed in 1992, today contains over fourteen thousand citizens from Dublin and Taipei to Sarajevo and New York, unified by the possession of an NSK passport and a willingness to actively contribute to the growing and ever-expanding initiatives of the NSK State organised globally. Works on display include NSK passports, stamps, plates and films made by the NSK state members.

The season at Calvert 22 is a component of a unique four-part presentation of NSK in co-operation with Chelsea Space, Tate Modern and UCL.

IRWIN – TIME FOR A NEW STATE and NSK FOLK ART are curated by Lina Džuverović and are accompanied by an in-depth publication, digital resources and an extensive events programme.

For more details on events please visit our website www.calvert22.org