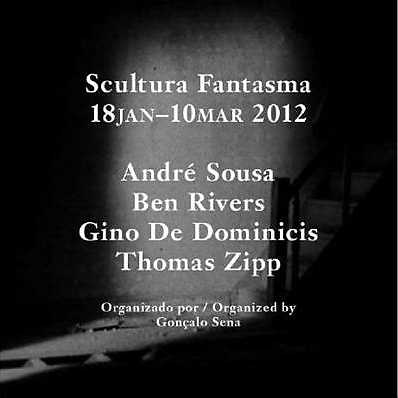 TYI: Gonçalo Sena is an alumnus of the DAI.

The exhibition was imagined from a work by the Italian artist Gino De Dominicis. About the work, a photo-montage, there isn't much information, matching the artist's posture of not allowing any reproduction or proper documentation of any  work of his. The owner of the work thinks it is Sensa Titolo (Untitled), but he also indicates that the historical dealer of De Dominicis calls it il fantasmino (the little ghost)The original photograph was taken by Claudio Abate in the '70s, on the occasion of an exhibition by Gino De
Dominicis at l'Attico, in Rome; in the back of the room we can see the artist from his back. In the beginning of the '90s, De Dominicis inserted over the original photograph the silhouette of a sculpture he presented some years before at the Venice Biennial – the dark and opaque figure of a sumerian warrior.

The photo-montage suggests a spatial and temporal overlap, pulverizing the chronology of the work and convoking an apparently impossible scenario. A ghost sculpture. Or a space of a gallery as an architectonic ghost for the silhouette of a sculpture.

Centered in the idea of apparition as a mode of confront between ghost and sculpture, the present exhibition is an exercise where the visual and the material get in conflict with what's perceptible and mortal, a proposal for the ephemeris of a sculpture, or the eternity of an hallucination.

Following the Italian artist's piece, the group of works presented by André Sousa, Ben Rivers and Thomas Zipp form an ephemeral scenario of objects and images: the interior of an abandoned house illuminated by flash lights; a brick wall in ruins blocking the entrance; a columnar skeleton orienting the walls in space; masked figures seek for their return to humanity.