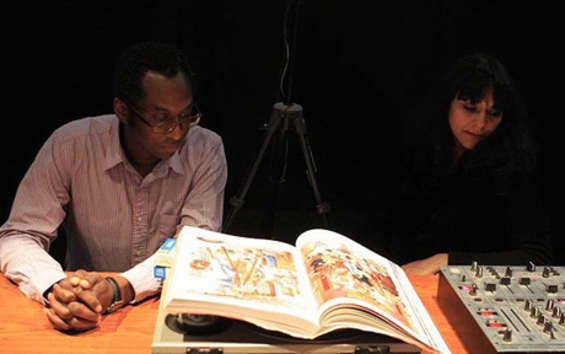 Kodwo Eshun is a filmmaker, theorist and artist, based in London. He is Lecturer in Contemporary Art Theory at Goldsmiths, Department of Visual Cultures, University of London and Professor of Visual Arts at Haut Ecole d’Art et Design, Genève.

In 2002, he founded The Otolith Group together with Anjalika Sagar. Their essayistic approach reflects on the perception and nature of documentary practice through films, texts and activities related to media archives. From Cold War ideology to global capitalism processes, recent history appears as fragments of a personal diary which, in turn, could be fiction.

The Otolith Group has grown as a collaborative platform that seeks to rethink the dynamics of cultural production under conditions of accelerated, unstable and precarious global conditions. Films, art works, exhibitions, curated programmes, and publications are collectively conceived, and research forms the basis of the practice. The Otolith Group were nominated for The Turner Prize in 2010 and have exhibited internationally since 2003.

The Otolith Group and DAI have been teaming up, off and on, since 2003. In 2004 Kodwo Eshun and Anjalika Sagar took part in the DAI-NAI project which took all DAI-students, staff and tutors to Nanjing in the P.R. of China for an extensive, 6-week long collaboration with the Nanjing Art Institute. In the following years The Otolith Group returned to DAI at numerous occasions, as respondents to presentations, guest- lecturers or project leaders (CINÉTRACTS BY OTHER MEANS: NOTES FROM TEHRAN, 2014-2015)