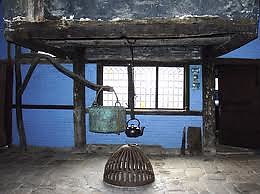 Los Hoes, a historical farm building typical for the region around Enschede. Now part of the Rijksmuseum Twenthe. Breakfast location during the conference Here As The Centre Of The World organized by DAI in 2006.

Solomon’s early food-related work included a temporary concept restaurant exclusively serving micro-greens based up on the notion that even northern urbanites without access to land and light could produce a significant portion of their own food. In the projectLucky Mi Fortune Cooking together with food entrepreneurs from Rotterdam’s Afrikaanderwijk and the Freehouse Collective, she set up a free kitchen that ‘super-used’ the surplus from the bi-weekly outdoor market as well as other existing products, infrastructure, expertise, and facilities.

In 2007 Solomon co-curated the Edible City (NAi-Maastricht) on food and the built environment and was food domain expert of DOTT07, a design biennial in Newcastle (UK). In 2008 she was designer invitée of the design biennial in Saint-Etienne’s (FR) Cité du Design showing community tools for food and sustainability. Currently Solomon is working with Den Haag and Amsterdam neighbourhoods on projects that are radical visions for community involvement with food systems and urban agriculture. Read more on her weblog, www.culiblog.org.

Debra Solomon was a mentor and curator of projects and dinners at the DAI ( at the time based in Enschede) between 1997 and 2006. http://culiblog.org/2006/04/locative-eating-in-overijssel-at-the-end-of-the-hungry-gap/